Like Greek, Middle Eastern, and Indian mythologies, the West African mythology offers a sophisticated understanding of creation and humanity. African mythology permeates Cameroon, Nigeria, Benin, Niger, Ghana, Gambia, and it has been transported through slavery to Brazil, Cuba, Trinidad, Guyana, Haiti and other South American and Caribbean countries. The African mythology, rich in artistic fables and truth stories, offers a pantheon of gods and goddesses. Like Indian Brahma, Olorun (also known as Olodumare or Olofi) is the creator god who crafted the universe. Like Middle Eastern Baal, Chango is the god of thunder and storm. Like Greek Aphrodite, Oshun is the goddess of beauty, love, and sexual ecstasy. A river in Nigeria is named Oshun that flows into Lagos Lagoon.

The most powerful and sweetest god is Obatala, a universally known deity. Much like Christian Jesus, Obatala is the child of god. Olorun, the father, permitted Obatala, the child, to descend from the heavens, create land over the waters, and template human bodies from popo (mud and clay). The Qur'an mentions several times that Allah created humans out of clay. (Qur'an 3:49). Science is in the process of establishing that human life first sprouted in Africa; nevertheless, the mythological credit of sculpting the human body is reserved for Obatala.

As there are angels in Jewish, Christian, and Islamic religions, there are Orishas in the African spiritual tradition. Orishas are divine beings that govern various aspects of human life. Obatala is the godfather of Orishas, such as Chango and Oshun. Just as the Levant is central to the Middle Eastern religions, Yorubaland is central to the African spiritual tradition. And Just as Banaras is a sacred city in India, Ile-Ife is a sacred city in Yoruba. According to Yoruba beliefs, when Obatala descended from the heavens, he first settled in Ile-Ife, founding the mother city of humanity.

Obatala does not have a permanent gender. He is androgynous. He is married to Yemaya, the goddess of oceans and the godmother of Orishas. Free of gender, however, Obatala could be male, female, or neither. This asexuality makes Obatala the god of all human beings without regard to gender. Obatala has no patience for gender fights that break out in human communities.

Likewise, Obatala is free of all colors even though he is associated with whiteness primarily because white light is polychromatic. Obatala is also known as the god of white clothes. Obatala absorbs all wavelengths ranging from "700 nm at the red end of the spectrum to 400 nm at the violet end." Obatala accepts only white offerings without spices. The Obatala worshippers dance in white costumes, offer coconut milk, white pumpkin, and light up sandalwood incense. Silver and ivory are the charms associated with Obatala. 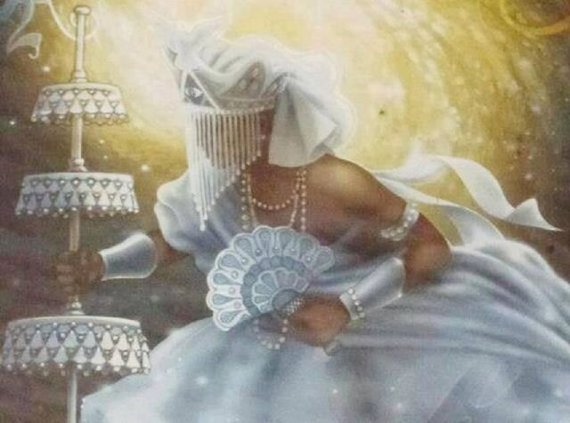 Obatala is the god of persons with special needs. Compassion moves Obatala's heart.
God is compassionate in almost all spiritual traditions. In Islam, Allah is most compassionate, "Peace be upon you. Your Lord has decreed upon Himself mercy."(Qur'an 6:54). In Judaism, Yahweh says: "I will have mercy on whom I will have mercy, and I will have compassion on whom I will have compassion." (Exodus 33:19). In Christianity, Jesus tells a demon-possessed man: "Go home to your own people and tell them how much the Lord has done for you, and how he has had mercy on you." (Mark 5:19). In Hinduism, Lord Krishna says he loves the person who shows benevolence and mercy to all living beings. (Bhagavad Gita 12:13-14).

Obatala's mercy is located in the god's self-awareness. According to the Yoruba spiritual tradition, using his divine power in sculpting humanity Obatala has constructed magnificent human beings. While once under the temporary influence of Palm wine, however, Obatala breached the duty of care and made some defective human beings. When an individual suffers because of an existential defect, including organ or limb malfunction, genomic disorder, or hereditary flaw, Obatala is most kindhearted because he knows that he shares part of the blame.

The Yoruba concept of compassion does not emanate from a perfect god toward imperfect and error-prone created beings, as is the case in most spiritual traditions. Obatala's mercy flows from the self-awareness of a powerful but negligent god toward frail but blameless created beings. In most spiritual traditions, God shows compassion because the human being errs; in Yoruba tradition, Obatala shows compassion because he himself has erred. This remarkable self-concept makes Obatala the fairest god of the universal pantheon.

When West Africans were forcibly enslaved and brought across the oceans to Cuba, Brazil, Haiti, and the Americas, the Orishas did not forsake their devotees and the devotees did not desert the Orishas. The Catholic colonists forced the "heathens in chains" to accept a new faith and "be saved "but Obatala did not leave the hearts and heads of the believers. In the guise of Catholic saints, the African slaves worshipped their Orishas, giving birth to a religion called Santeria. In an ironic twist, Jesus, the god of the mute, the blind, and the sick, was appropriated by white whip-holders while Obatala, the god of persons with special needs, continued to console the slaves working in white cotton fields.

In Africa, Latin America, and the Caribbean, devotees celebrate Obatala through September festivals. Devotees wearing white costumes parade through the streets beating drums and chanting songs. In these festivals, all Orishas are worshipped, offerings are made, and food is shared. In these festivals, a community of humans celebrates a community of Orishas, mingling the human with the divine. Back in Ile-Ife, the believers wearing silver jewelry and white garments enter the Obatala shrine and chant devotional songs in unison playing igbin bells, a classical instrument invented centuries ago to celebrate Obatala, the sweetest god of thoughts, dreams, and purity.