Levels of obesity in adults and children are rising worldwide. The World Health Organization calls the rising level "an epidemic" citing sugary drinks and processed foods as the main culprits, along with an urban sedentary lifestyle.

A study published in The Lancet named "Global, regional, and national prevalence of overweight and obesity in children and adults during 1980-2013: a systematic analysis for the Global Burden of Disease Study 2013" stated obesity issues "were estimated to have caused 3.4 million deaths globally, most of which were from cardiovascular causes. Research indicates that if left unaddressed, the rise in obesity could lead to future declines in life expectancy in countries worldwide."

The rise in obesity levels is concerning health bodies and indicates a serious change in human behaviors.

Obesity in the USA

Data from the Organisation for Economic Cooperation and Development (OECD) found that adult prevalence of obesity in the US is 36 percent. Arkansas tops the interstate poll at 35.9 percent, whereas Colorado weighs in at 21.3 percent. Southern and Mid-West states have the higher rates with 23 out of the top 25 situated there. 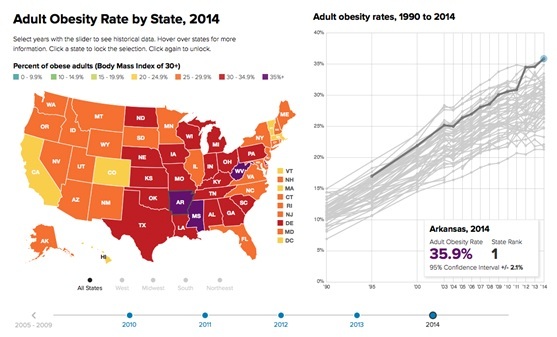 Sadly it's not only adults suffering from high obesity levels in the US. 30 percent of American children under the age of 20 are obese -- a big jump from 19 percent in the '80s.

Obesity in the UK and Europe

In Europe a higher level of women's education meant a lower obesity rate, which applied to all 18 states measured. Once again, for men no links were identified.

The World Health Organisation ranks Europe as having the second highest proportion of overweight and obese citizens behind the Americans. 65 percent of men and 58 percent of women in the UK are overweight compared to ¾ of American men and 60 percent of American women. An interesting common theme is that women in both countries with higher levels of education are less likely to be obese, but there's no connection with men.

In general American children are twice as likely to be overweight than European children.

Although America has a higher rate of obesity across the board both the UK and the USA have troubling obesity figures. When compared to Japan and Korea with 3.5 and 4.1 percent prevalence of obesity respectively there is an enormous difference.

Why Is It A Problem?

Obesity and being overweight is a serious problem because it raises the risk of diseases that ultimately lead to death.

In Europe some of the biggest killers are blood pressure, cholesterol, and a sedentary lifestyle, all which can be linked directly to a poor diet and lack of exercise.

An effect of obesity, hypertension (high blood pressure) can cause stroke, diabetes, high cholesterol,heart diseases such as coronary heart disease, pregnancy problems and some cancers (endometrial, breast, and colon). There is also evidence it can lead to psychological problems, affecting self-esteem issues and confidence.

Marie Ng, Assistant Professor of Global Health at IHME said the rise in obesity among children in the US was especially troubling. She urged 'We need to be thinking now about how to turn this trend around.' Stemming the tide of obesity in children is important because overweight children tend to become overweight adults.

Not only that, the cost of world-wide obesity is a huge strain on health providers. The obesity problem is not going away -- in fact it's gathering pace and getting worse.

How To Turn it Around

Healthier diets and weight loss are essential for the USA, the UK and the rest of the world to bring obesity levels down. Specifically, eating more fruit, vegetables, nuts and grains whilst cutting down on fat, sugar and salt levels, is advised. Modern technology has played a significant part in limiting how much physical activity we participate in. As a result, most people need to increase their daily physical exercise, all which will help to reduce the risk of obesity.

But people are slow to change and it won't happen without some effort. Healthy eating and exercise needs promotion through the education systems, both adult learners and children, advertising campaigns aimed at all age groups and pressure put on corporations to reduce or remove the fat, salt and sugar from their foods.

There have been some attempts to stop the obesity crisis from growing. The UK government has recently introduced a tax on fizzy drinks with the average rise to 8p per can. The extra money raised will go toward school healthy living programs. There's also a call for a sugar tax to be introduced in the USA. But are these efforts too little too late?

There may be a glimmer of hope found in the reports of falling fast-food chain profits and an uptake of healthier alternatives, but what is clear in the US and Europe is that the quality of diet is going downhill. Drastic steps are needed to slow down the global path to health destruction. Promotion of health eating and exercise as a way of life is essential.