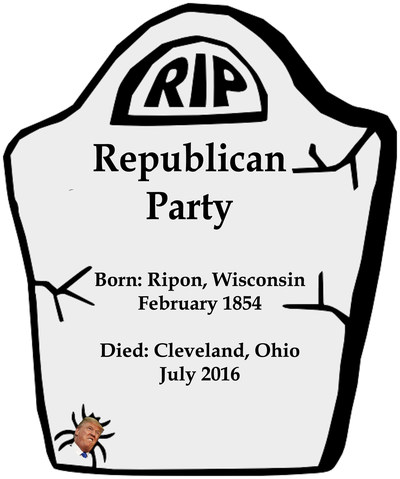 Ingestion of large quantities of a slow-acting flesh-eating bacterium, Racism americanesis, beginning in the 1960s, weakened the party, sapped it of its principles, caused its heart to deteriorate, raised its blood pressure to extremely dangerous levels, and left it with only white blood cells--a condition that initially seemed to strengthen it, but ultimately left it with no resistance to a virulent disease that struck it in the summer of 2015 and precipitated its death a year later.

The new and fatal disease that afflicted the weakened party is known scientifically as Trumpine spongiform encephalopathy, but most people call it by its common name, Mad Don Disease. It is an affliction that attacks its host's brain, leading the organism to engage in increasingly bizarre behavior, including but not limited to wild, uncontrollable outbursts of anger directed at anything and anyone, susceptibility to the most outlandish sorts of conspiracy theories, the fabrication of more and more ludicrous lies, denying what the afflicted party has said a short time before, misogyny, xenophobia, megalomania, and so on. Patients afflicted with Mad Don Disease usually have to be taken in straitjackets to psychiatric hospitals in the final stages of the disease, just before they expire. The demise of the Republican Party was a bit different in this regard. While there were many symptoms clearly indicating the need for professional mental care and sedation in a proper institutional setting, the Party was allowed to spend its last hours in an arena in Cleveland. This enabled millions of people to witness its last, machine-assisted breaths via television.

The Republican Party was born in a schoolhouse in Ripon, Wisconsin, in 1854. Its parents were people who conceived the child when they were brought together by a shared opposition to the expansion of slavery, and the youngster turned out to be remarkably strong (though in its early years it proved unable to adapt to the climate of the American South). The youthful Republican Party was also stunningly precocious, winning the presidency of the United States at the age of six. At the age of seven, the very advanced youngster led a war that ultimately succeeded. It ended slavery in the nation and, for a time, sought to bring about genuine racial equality.

Idealistic in its youth and adolescence, the Party in its 20s agreed to marriage with a Robber Baron, who led it away from its youthful idealism and towards a religion that worships a God called The Market. In its forties, the Republican Party became expansionist, went to war with Spain and then fought a war in the Philippines to bring "the little brown brother" under its tutelage.

During that same fifth decade of its life, though, the Republican Party also began to move in a progressive direction, adopting several bright children, including Robert La Follette and Theodore Roosevelt.

As many people do, though, the Republican Party grew more conservative as it aged. In its seventies, the Party wed itself completely to those who worship the Free Market God and pushed policies that helped to cause the economy to collapse in 1929. This marriage caused it to fall into a weakened condition for a few decades. In the years just before its one hundredth birthday, the Party was seduced by people with such names as Nixon and McCarthy, who led it to adopt wild accusations of Communist infiltration almost everywhere.

There were, however, during the early years of the party's second century, some more moderate voices coming out of its mouth. A majority of Republicans voted for the Civil Rights Act of 1964 and the Voting Rights Act of 1965. Substantial minorities of Republicans even voted for Medicare and Medicaid. The Party contracted a serious disease named Goldwaterism in 1964. The malady almost killed it, though it found that the Southern climate now seemed better suited for it and it moved there for a period of convalescence.

At the end of the 1960s, the Republican Party began consuming and then regurgitating large doses of Racism americanesis. The initial results, especially the marked increase in white blood cells, produced a reinvigoration of the previously weakened body, accompanied by a noticeable paling of its skin.

A new affliction struck the Republican Party around the age of 140. Newt Gingrichitis caused the party become surly and uncooperative and to display an increasingly unmistakable tendency toward hypocrisy.

By 2008, the ill effects of the flesh-eating bacterium were becoming evident, particularly as the Party found itself residing in an environment in which the positive results of the infection were increasingly outweighed by the negative consequences.

In its last years, as its afflictions spread more completely through its body, the Party became more crotchety and angry.

Thus the Republican Party was in a very weakened condition when, in June of 2015, it had its first serious exposure to Mad Don Disease. Although a large number of physicians were called in to try to combat the new affliction, it spread rapidly through the Party, leaving it by June 2016, a year after the infection first invaded the body, on life support without a functioning brain or heart. It was left for the decision to be made to pull the plug in Cleveland a month later.

The Republican Party was preceded in death by its maternal grandparents, Abolitionism and Reconstruction; its paternal grandparents, Greed and Tariffs; its parents, Isolationism and McCarthyism; and a brother named Watergate. The Party is survived by several wealthy uncles, including Charles Koch of Wichita, David Koch of New York, and Sheldon Adelson of Las Vegas; an adopted brother, the National Rifle Association, of Fairfax, Virginia; an inconsolable stepson, The National Review, and a child born to it out of wedlock, the Libertarian Party, current whereabouts unknown. Other survivors include two daughters, Deregulation and No New Taxes; two sons, Concentration Of Wealth and War In Iraq, Jr. It is widely believed that W.I. Iraq, Jr., sired a bastard granddaughter of the Republican Party. Her name is Isis.

In lieu of flowers, mourners are asked to send as much money as possible to their favorite billionaire.

Robert S. McElvaine teaches history at Millsaps College, is the author of ten nonfiction books, and has just completed a draft of his first novel, "What It Feels Like..."