In the months and weeks following my mother's death, my father and I carefully pulled apart the pieces of her material life. We sorted through her closet, threw away her cosmetics, gave away her cookbooks, her shoes, tossed away the little scraps of paper that ran rampant on her desk, her looping handwriting cascading across them in messy lines. We threw away the mail that came for her, and stored away other things like her wedding dress and her jewelry. We even found a new home for her beloved pet parrot Norman.

It was one of the most outwardly painful things I'd ever experienced, this dismantling of a loved one's physical life. I'll never forget staring into a dresser drawer that contained only a wide assortment of her shoulder pads, or the time I came across a little box in her bathroom that contained the strands of her hair that she'd collected as it fell out from chemo. 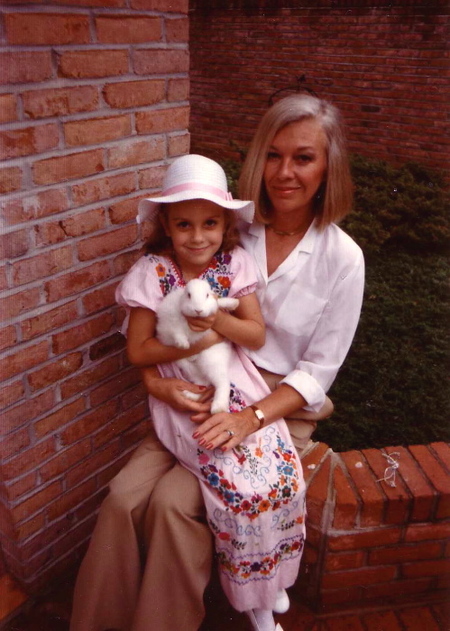 With other things, I relished in their vanishment; using the last bar of soap she had scrubbed herself with, running it across my own body as my tears mingled with the shower water. Defrosting and reheating sauces she had made and stored away, using the pens from her desk until their ink ran dry.

As for the things I kept, they were numerous. I wore her clothes, her jewelry, kept her notebooks and high school yearbooks. I even still have one of her plants, kept alive all these last 18 years through moves and boyfriends and other losses.

If I could have kept everything, I would have. If I somehow could have left that house intact, exactly as it had been the day she died, I would have. I would like nothing more than to be able to wander through those rooms yet, to sleep where she had slept, to run my fingers across the nightgown she'd left sitting out on the little bench at the foot of her bed.

But I couldn't. None of us can do that.

About two years after she died, I was visiting Atlanta with my father and he took me along on an errand to a consignment shop where he had placed most of our valuable furniture and art. I was 20 years old by then and I wandered the cavernous store, finding myself startled each time I came across a sofa or a painting that had once hung in our living room, but that had now become part of an imagined living room set designed to appeal to a passing stranger.

By the time I had toured the entire shop, noting each and every thing that had once belonged to the life I had formerly known, I was in tears. My father was at the register, going over a detailed list with the manager and I could feel my breath coming in heaves, could feel the world collapsing inwardly around me.

Just before I turned to walk out the door, I noticed a large, ceramic Mexican serving bowl that my mother had used a hundred times when I was growing up. I walked over to it and picked it up gently in my hands, knowing that I would not set it down again until it was in my own home. I turned to my father and I saw in him the same knowing he'd had when I showed up one afternoon in tenth grade with an abandoned kitten I'd found. He knew that there would be no arguing with me, and so I stood there patiently, tears streaming down my cheeks, as he found the item on the manager's list and crossed it out.

I flew back to New York City later that week, that giant ceramic bowl sitting in my lap for the duration of the flight. I found a place for it in my tiny East Village kitchen that had no business housing such a large object, and I dragged it out to California with me when I moved here 10 years ago. I took it with me to Chicago too, and then back here again to Los Angeles two years later.

Over the last 15 years I've used it almost once a month, making my mother's macaroni and cheese, or her New Year's Day Hoppin' John, each and every time marveling that this object almost belonged to someone else.

Last Tuesday, in a slip of my soapy hand, it fell into the sink and broke. 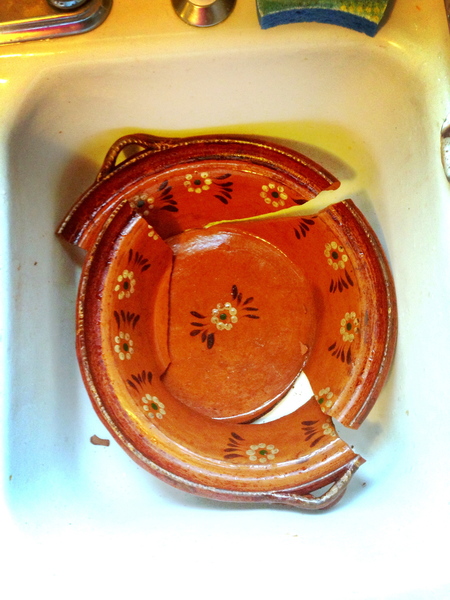 I still can't get over it.

I can't even bring myself to throw away the pieces. They've been sitting in the laundry room for days now, waiting to go out with the trash, and today, when I was headed out the back, garbage in my hands, I could not take them with me. Instead, I moved the pile of pieces to my office.

I know that I will eventually have to let them go, but not just yet.

I know this about everything.

Yet still. I cling.

Lately, I've been reading a lot of Buddhist literature, dwelling on this notion that in order to release ourselves from suffering, we must first let go of our attachment to just such things as my mother's ceramic bowl.

"We are like children building a sand castle. We embellish it with beautiful shells, bits of driftwood, and pieces of colored glass. The castle is ours, off limits to others. We're willing to attack if others threaten to hurt it. Yet despite all our attachment, we know that the tide will inevitably come in and sweep the sand castle away. The trick is to enjoy it fully but without clinging, and when the time comes, let it dissolve back into the sea." - Pema Chodron