As the actress noted during an interview with The Huffington Post in late 2011 in Los Angeles, where the cast of the Golden Globe-winning PBS series was promoting the show, "I don't look quite as..."

Finneran laughed heartily. "I think that's a nice way of putting it," said the actress.

But when she is recognized as O'Brien, the tart-tongued personal maid of Cora, the Countess of Grantham, she said fans positively revel in the character's reputation as the least friendly servant in Lord Grantham's stately home.

"People actually love that she's a nasty piece of work. They love to dislike her," said the actress. In fact, fans of the PBS period drama revel so much in the machinations of O'Brien and her partner in crime, former footman Thomas Barrow (Rob Collier-James), that they consistently urge her not to let the maid lose her edge in the second season of 'Downton Abbey,' which is currently under way.

"People have come up to me and have said, 'Please, she's not become a real Goody Two Shoes, has she?' And she's hasn't at all," Finneran said.

Still, O'Brien isn't spending all her time in Season 2 coming up with the kind of cutting remarks that she regularly launches at hapless housemaids and at her nemesis, valet John Bates (Brendan Coyle). In fact, O'Brien is one of the few people in the house to treat new employee Henry Lang, a shell-shocked veteran of the trenches of World War I, with understanding and patience.

"Nowadays, we send people to therapy, whereas in those days, if you weren't coping, it meant you could lose your job," Finneran pointed out. "That's one of the times you see O'Brien being kind, actually. I think it's because she sees everything before everybody else. She has to suss out people or her position of power could be altered. She has to be the first to know about anybody that arrives, and she sees straight away that this man is struggling. She doesn't want him to lose his job, and she's compassionate toward him."

But it's not as though O'Brien finds life more congenial in Season 2. Early in the season, Downton Abbey is turned into a convalescent home for injured soldiers, and in the maid's mind, any alterations to the usual hierarchies threaten her position as Cora's right hand.

"Any change is difficult for her," Finneran said. "Initially, she is not good with the place becoming a hospital, because she feels Cora's power is being taken away from her in her own home. Actually, she doesn't like anyone doing anything that she hasn't done. There's a bit of that in there as well."

Yet there seems to be something more than mere jealousy behind O'Brien's nasty side. Viewers don't learn anything about the maid's pre-Downton history this season, but Finneran has some theories about what makes her so prickly.

"I've always carried around with me [the idea that] something has happened to her to make her be the nasty piece of work that she can be," Finneran said. "We don't know what that is -- [creator] Julian [Fellowes] hasn't written about that. But for me, I keep that in my head to play the part ... She's worked since she was probably 14 or 15 years old, and has basically sacrificed her entire life to somebody else, for the good of their life and their home -- it's no wonder that she would get frustrated or angry about things."

Though it beat working in a factory or doing endless farm chores, being a maid wasn't exactly easy duty. Back in those days, the servants in great houses like the fictional Downton Abbey spent 12 hours a day or more making the lives of their aristocratic employers as easy as possible.

"Cora does nothing -- she doesn't even brush her own hair!" Finneran said with a laugh. "O'Brien would be up before the lady of the house is awake, and not go to bed until she goes to bed. In between those times, once dressed, there's no sort of sitting around going, 'I might read a magazine.' There's mending and washing to do, and those [outfits] are heavy as well."

O'Brien's frustrated, vindictive side caused her to do something dreadful to Cora in Season 1. Mistakenly thinking she was about to lose her job, O'Brien caused Cora to fall in the bathroom by putting a piece of soap where she was likely to slip on it. Within hours, Cora had lost the male child she was carrying, thus ensuring that the inheritance complications that bedeviled Lord Grantham and his family would continue.

Though O'Brien almost immediately regretted what she had done, by the time she went to move the soap, Cora had fallen and hurt herself. Cora never found out what her maid had done, according to Finneran, but O'Brien still feels awful about that day (and that plot thread isn't ignored in Season 2).

"Nobody else knows about that, still," Finneran said. "She doesn't talk to anybody about it. But she really, really is protective of Cora [in Season 2]. She's still manipulative as well, so she will try and manipulate Cora into doing something that will help O'Brien out or help Thomas out." O'Brien is still O'Brien, after all.

But between the ways in which the war affects her outlook and her guilt over Cora, Season 2 brings a different O'Brien. "I think she is softer," Finneran said. And even her relationship with Thomas, who can be rather nasty in his own right, undergoes something of a change. Thomas is off fighting World War I in the first few episodes of the second season, and when he returns, not everything is exactly as it had been between them.

"O'Brien hasn't got any friends aside from Thomas, so the fact that Rob was not around meant it was a change for me," Finneran recalled. As for her character, Finneran said, "She's got nobody to bounce off and play those games with."

When Thomas returns, their relationship does not pick up exactly where it left off. "They're a little bit sparkier this year; they don't always see eye to eye," Finneran noted. "They're not at war with each other. They would always stick up for each other. But they're just not always singing from the same hymn sheet, if you will. He's been away at the war and he's come back a changed man, because he's seen things that nobody should have to see."

Though O'Brien occasionally spars with Thomas and exhibits her less grumpy side at times, don't expect a complete transformation from the maid with the distinctive curly bangs.

"She's not gone from the wicked witch to the Angel Gabriel or Mother Teresa," Finneran said with a chuckle. "You really wouldn't want that. The viewers don't want that."

Check our slideshow of more of our favorite TV maids, butlers and nannies, from the dutiful Geoffrey on "Fresh Prince" to the high-tech Rosie on "The Jetsons" to the hilarious Dorota on "Gossip Girl."

'Downton Abbey's' O'Brien: Siobhan Finneran Interview About Her Character We Love To Hate 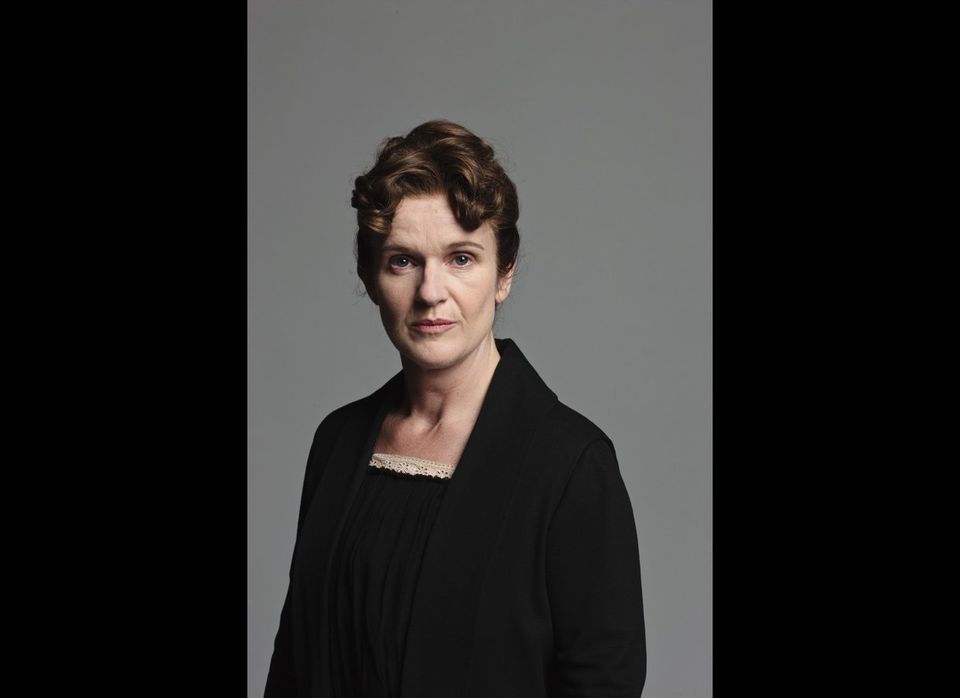 1 / 14
O'Brien, "Downton Abbey"
Sarah O'Brien, Lady Cora's personal maid, is the epitome of the snobbish British servant: No one is more alive to the rules of the class system than this cynical woman, who never misses a chance to squelch mild signs of rebellion or put a fellow employee in his or her place. Lady Cora isn't always oblivious to O'Brien's nastier side, but O'Brien does a good job of making sure her employer sees her frequently manipulative actions in the best possible light. Still, some of the devotion O'Brien (Siobhan Finneran) shows to Cora is sincere, and once in a while, the maid unbends enough to show a slightly warmer side to her fellow employees. Every soap needs a villain, but Finneran does a good job of helping you see the person behind the uniformed facade.
PBS