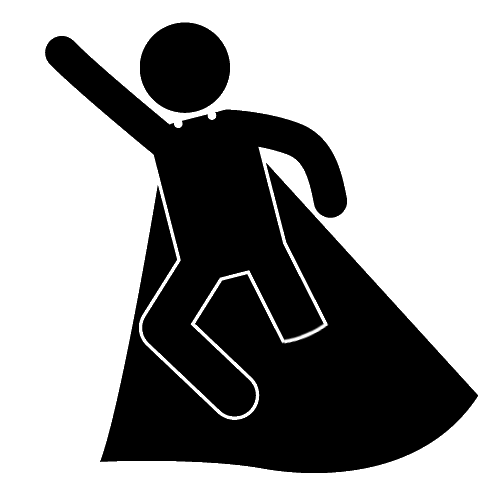 I bet you didn't know that I had a superhero name. My youngest family member named me "Automan." He is 3 and was naming the genders of other family members. When he got to me he unprompted deemed me Automan. I thought that was really cool and demonstrated his comfort level with my power wheelchair. He remains passionate about superheroes. He probably doesn't know it, but he stumbled across one of the main themes of superhero culture, which is disability.

In literature, disabilities or physical deformity is often a device to show evil, for example, Shakespeare's Richard III, has a humpback and Treasure Island's two evil characters are Long John Silver and Blind Pew. Unlike in books, disability is not always a bad thing in comic books, graphic novels and manga.

A simple Google search comes up with 430,000 hits about superheroes and their disabilities. In fact, often times, the disability is central to the character's backstory or the source of their superpower.

Professor X was paralyzed in a battle. Daredevil was blinded by radioactive waste while trying to save a blind man from being hit by a truck. Iron Man is known for his weak heart and drinking problem and for a short time, he was a paraplegic. It may not seem important to talk about fictional superhero comics, but as I have written about in a previous blog, textbooks lack people with disabilities, so comic books were a source of early positive identity for me.

One of my favorite things to do, was to invent creative answers to why I became disabled, which is one of the favorite questions of young people. One of my creative explanations was that I was abducted by aliens and experimented on. I especially liked the X men because you can view their mutant powers as differences rather than disabilities. Their powers are viewed as strengths. The majority of them fight cures.

It's good that comics are positive role models for kids with disabilities. My 3-year-old cousin views me as just a normal guy with cool wheels, which is one of the main points of my advocacy. If a 3-year-old gets it, then maybe there is hope for the rest of society. He doesn't expect me to overcome anything. He just accepts me as I am.

Other parts of society aren't as progressive as a 3-year-old. Paul Longmore's recently-released book Telethon spends a whole chapter on describing the history of the "overcoming" mindset and how it was central in the themes of telethons and therefore, infiltrated those thoughts into mainstream society. We still have a lot of work to do to change that mindset, which as become deeply rooted. I've started with the three year olds I know.

If you think about the whole notion of overcoming disability is impossible, so it creates a lot of unnecessary anxiety and pressure on people with disabilities to live up to some notion that they can be perfectly healthy, which doesn't really exist.

I could put all my energy into trying to walk, but at the expense of everything else I am able to do. I don't reject rehabilitation, but I no longer see it as the only pursuit that matters. I would probably have an exaggerated gait and be much more exhausted, leaving me unable to show off my wit and wisdom in this column. In the long term, walking can have negative health drawbacks, so it isn't always as healthy as people think. An exaggerated gait can cause a myriad of other problems. I continue to undergo some physical therapy to maintain what I have and maybe improve some, but in order to fully "recover," I would have to spend most of my days doing rehabilitation activities. I prefer to exercise my brain, to work, to have friends and to participate in society. The three year old is on the right track.

Ever wonder why some people feel the need to encourage other people to "overcome" what they perceive as a barrier, instead of just accepting what they can and can't do?

That's why I roll.

Voting Made Easy
Register to vote and apply for an absentee ballot today
Register now
More:
healthy livingdisabilityrehabilitationsuperheroesaccessibility
Newsletter Sign Up
The essential guide to taking care of your mind and body
Subscribe to HuffPost’s wellness email
Successfully Subscribed!
Wellness delivered to your inbox