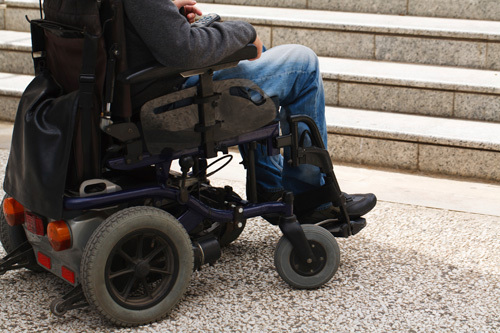 I haven't really blogged about my own home town since my introduction to this blog. Just like anyone else, I am a product of my environment.

Winston is an interesting place for a person with disabilities to live. We do have lots of services here that places like Salisbury don't. That's why we moved here in the first place. The communities around Winston have a couple of well-established schools and service providers.

I went to preschool at a place called the Children's Center for the Physically Handicapped. Handicapped is no longer in fashion, but that was its name then. That is interesting for a couple of reasons. First, it was integrated very early. First, in terms of race and then including people without disabilities. Very progressive stuff for here, in the south.

We also have Amos Cottage, another place I benefitted from, when I was young. That is where I attended physical therapy.

The Enrichment Center is an art based program where people with intellectual and developmental disabilities can make money selling their art and also, take classes.

These are all very good things.

But, as I explored in my presentation for our local museum, Winston also has dark spots both historically and currently. I've mentioned this in other blogs. Winston played a major role in eugenics.

A recent outing reminded me that we still have this contradiction. There is a locally famous restaurant called Skippy's whose owner has fallen gravely ill and had to close it. The community decided to do a nice thing and pitch in to reopen the restaurant briefly and use the proceeds for the owner's medical bills. People from other restaurants donated their expertise and other volunteers donated their time. It made the local news. They encouraged our community to support.

As a member of this community, I decided I could eat a hotdog or two to show my support. Little did I know something so small could turn into something much, much larger.

First, have you ever tried to find accessible parking downtown at lunchtime? Neither had I. That took a while and then we weren't sure if it was free or not. Then, we were reminded how inaccessible downtown is in general.

I was going to write a story about that when I was with the Camel City Dispatch, but I never got around to it. I should have gotten around to it.

After navigating in and around a parking garage, I was met with countless obstacles like newspaper caddies, flower pots, construction, blocking the sidewalk, etc. I had to roll an extra block to find two curb cuts that lined up on either side of the street, so I could safely cross. (There was a huge planter in the middle of one, but I made it around it with my exceptional driving skills.) We had to go 5 block lengths to get to Skippy's even though we were parked across the street.

While traveling back up the block, my pca and I noticed how few of the local businesses actually were accessible to people using wheelchairs. Most had at least one step up to get in. Good thing I didn't need to go shopping.

After I finally made it to Skippy's, there were a lot of really nice community members lining the path. They were very kind and moved everything around, so I could get by. One nice couple offered up their table, so I accepted.

My pca got our food and came back to the table. We then discovered that the table was not accessible. I couldn't get under it, or any of the other tables. We had to improvise.

A gentleman sitting nearby wanted to smoke, but was kind enough to ask if it would bother us. That doesn't often happen, so that was nice. My pca told him that it would bother us and he moved down the block to smoke his cigarette.

Two things were clear to me. One, is our community is filled with a lot of kind people, but here is also a lot of accessibility work to do. We need those kind people in communities like mine to start being mindful about accessibility. It makes the whole community more welcoming. Accessible shops would improve the community. We would spend our money locally, if we could get into the shops.

Winston is not alone. A friend of mine, who now lives in London, posted a video about the same inaccessibility in London on my Facebook. I don't mean to sound like British musician John Lennon, but Imagine if all of our communities were accessible.

Imagine if there were ramps instead of stairs. Imagine if wheelchairs could roll under every table. Imagine if all doors had door openers. We spend our money in businesses we can get into.

Take a look around. It isn't hard to do. Look at your homes, your businesses, your community. Speak up and speak out.