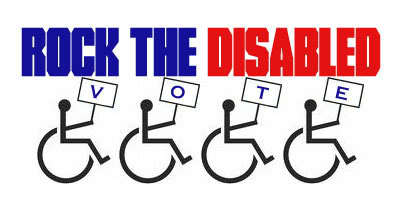 "If you're not at the table, you're on the menu."- Michael Enzi

There have only been a few notable times when disability was a political issue that the general population paid attention to. Most recently, Hillary Clinton came forward with a wide reaching autism initiative. Donald Trump mocked a reporter who has a physical disability, which garnered attention. Ted Cruz is in support of people with disabilities working. Marco Rubio spoke to his personal experience with his grandfather, who had polio as a child.

All of this being said, The RespectAbility organization released the first ever score card on disability rights issues. The first poll ever to specifically focus on disability issues. According to the poll, Clinton and Sanders scored 100%, Jeb Bush 94%, while Trump, Cruz and Rubio all scored 0%. The scores reflect that they answered 16 disability related questions and have plans, rather than judging them on the content. They each have dramatically different ideas. I am glad there are finally organizations specific to disability issues and I hope that makes a difference.

From what I understand, voter identification is not meant to be a hindrance. According to Disability Rights NC, as of 2016, voters will be asked to show a photo ID to vote in-person at the polls, however, no voter will be turned away because they lack acceptable photo ID. Voters may claim a "reasonable impediment" and vote a provisional ballot, which will be counted later. Examples of reasonable impediments include, lack of proper documents, family obligations, transportation problems, work schedule, and illness or disability, among others. Voters will sign a declaration describing their impediment and will provide their date of birth and last four digits of their Social Security number, or present their current voter registration card, or present a copy of an acceptable document bearing their name and address (such as a utility bill, bank statement, paystub, or government-issued document). If the voter does have ID, acceptable forms include a drivers license, a state ID card, a passport, a military ID card, a veterans ID card, a tribal enrollment card, and a drivers license issued by another state.

It can sometimes be hard to find out about candidates specific standings on different disability issues, but it is important to research all you can about each candidate and make the best choice. One good website is Project Vote Smart.

As a disability advocate, the best way to get a politician's attention is to vote for or against them. Come to the table by being an informed voter or you'll likely end up on the menu.