Inspired by one professor's infectious enthusiasm for Emily Dickinson, Obsessed is a HuffPost Culture series exploring the idiosyncratic, all-consuming passions of public figures and unknowns alike. Through a mix of blogs and interviews, these pieces will highlight the elusiveness of whatever it is you just can't live without -- whether it's blue jays, Renaissance fairs, fan fiction, or in the case of David Lynch, coffee. If you have an obsession to share, drop us a line at culture@huffingtonpost.com. 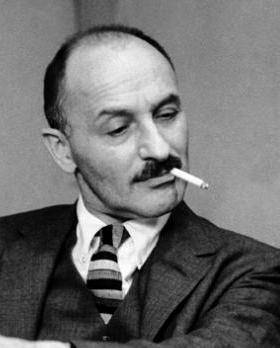 Marc Blitzstein's music is not exactly an obsession of mine, but I do find the musical DNA of which it is composed indispensable. Strands of that DNA -- strict adherence to economy of means, a passion for combining words and music, the belief that music can promote social justice, an abhorrence of pretension -- are woven contrapuntally, inextricably, into the music that I compose, and have been, nearly from the start.

Marc's music is powered by the ironic marriage of opposites. A fierce advocate of the poor and disenfranchised, he was born in Philadelphia in 1905 to affluent parents. Determined to write music popular with Regular Joes, he studied composition and piano at the Curtis Institute. Then he went on to Berlin to study with Arnold Schoenberg and to Paris where he worked with Nadia Boulanger. He began as a modernist, but he turned populist in the 1930s, shortly before he (an openly gay communist) married novelist Eva Goldbeck. Three Portuguese sailors in Martinique beat him to death in 1964 after a sexual encounter. In 1937, he entered Broadway history when the Works Progress Administration shut down The Cradle Will Rock -- an opera presented as a musical. As the story goes, director Orson Welles and producer John Houseman walked the musicians, cast and audience from the Maxine Elliott Theater to the nearby Venice Theater, where -- in order to evade union restrictions -- they performed the piece from the audience, with Blitzstein (not a union member) accompanying from an upright piano onstage.

To some, Marc's signature gambit of destabilizing tonality by throwing a suspended fourth in the bass was crude. But, like a beat cop's billy club to the ribs, it got things moving. Minus Blitzstein's example and inspiration, Leonard Bernstein might have been a very different, possibly lesser, composer.

One rainy November 1980 day Karlos Moser, then head of the opera program at the University of Wisconsin-Madison, where I was an undergraduate music major, and I were working through some songs that I had contributed to a review he was concocting. My introduction to Marc's music had come when Karlos cast my older brother Kevin as Ben Hubbard in his production of Blitzstein's Regina during the late 70s. Karlos mentioned in passing that the State Historical Society possessed the Blitzstein papers. Thrilled, I had sprinted across the street to the archives, filled out a request to see them, and was astonished to be granted immediate access. Within thirty minutes, I held in my hands a Photostat of the manuscript of Blitzstein's fair copy of the first page of Cradle. I was 17.

Odd it was, a year later, to find myself a student of Ned Rorem's at the Curtis Institute, composing and practicing on the same pianos Marc once did, passing his graduation portrait (along with everyone else's -- Leonard Bernstein, Ralph Berkowitz, Gian Carlo Menotti, Samuel Barber, Lukas Foss, and on and on) on my way each week to my piano lesson. Odder yet to have landed there in part because of a letter from his friend Bernstein to my mother, telling her I was "the real thing," and encouraging her to send me to Juilliard (that's another story) to study with another of Marc's close friends, David Diamond.

John Houseman's production of Marc Blitzstein's The Cradle Will Rock at the Fairbanks opened on 30 July 1983. I was there, seated in the first row. I still weighed about 160, sported a Blitzstein-esque moustache, and was still a student at Curtis. Before the performance, Houseman took the stage to tell the story of the night the show opened -- Blitzstein at the piano, Orson Welles dashing around the theater, playing multiple characters, everyone afire with the moment. Ordinarily too abashed to importune, I threw myself at Houseman afterwards. "You captured lightning in a bottle, didn't you?" I enthused. "Yes, my boy," he drawled in his Professor Kingsfield voice, "I'm acutely aware of that." I laughed. He was disarmed. "You look like Blitzstein," he remarked. I flushed with pleasure. He frowned. "He ended badly." I waited. Beat. "Yes, I know," I said, "I'm a composer." He thrust his chin upwards theatrically as though searching for answers among the klieg lights: "Dear God," he said, exploding the G, extending the O into a melisma, and plucking the final D like a pizzicato. "What does one do with a composer?" I laughed again, shook his hand vigorously, and thanked him for his time. "Not at all," he said. "Good luck." He stared at me, hard, for three long beats. "You'll need it."

Summer 1985. Saranac, Serge Koussevitzky's home overlooking the Berkshires across the highway from the Tanglewood grounds. Late one evening, after hearing me improvise at the piano in Marc's style and a discussion about Blitzstein's music, Bernstein asked me to have a go at completing Sacco and Vanzetti, the unfinished opera for the Met found in the trunk of Marc's car after he died. I told him I'd love to have a try, but couldn't afford to do it for no fee.

A few days later, at Bernstein's behest, Jacob Druckman approached me on the back patio and put a little money on the table for the project on behalf of the New York Philharmonic, for whom he was then serving as composer in residence.

My instinct was that, as I did when offered by Ellis Freedman and Sylvia Goldstein a job as Aaron Copland's final amanuensis, I should refuse it. I told Druckman that I felt that if I wanted to establish myself as a composer, then I needed to be known for my own music, not for what I had done for others'. He said that I had a point, and was impressed enough by the professionalism with which I handled the situation to speak to his wife Muriel about a ballet commission.

Having my hands on Blitzstein's sketches was just too inviting an invitation to refuse. After spending a few days with them, I concluded that the most responsible thing to do was to leave the thing alone-they were just too fragmentary, too raw. The finished score would require the creation of too much original material to make it coherent.

That May, Eric Gordon helped me to find the manuscript of Marc's Piano Sonata, which hadn't been performed publicly since the 20s so that I could program it on the concert series I was putting on in Philadelphia and New York.

During spring 1990, I was fortunate enough to work on my first major opera Shining Brow with Bernstein. As Bernstein once did for Marc with Trouble in Tahiti, I did for Lenny: I would play and sing the scene from Brow that I was working on. He'd amble over to the bench, push me to the side, and start playing off of my manuscript, squinting, sort of wheeze-singing as he briskly double-checked parts he wanted to speak to.

"Okay, baby," he'd begin. "Try this." He would "put over" a few bars of what I had written and veer off in a new direction, improvising an entirely different line reading. Then he'd stop, suck on his plastic cigarette holder, quickly page to a different part of the sketch, find something, and say, "Or you could have used this from before, like this." He'd play a few bars.

"No, that wouldn't work," he'd think out loud. I'd improvise a different line reading. "No, no, you can't do that!" he would laugh, "Marc did that in No for an Answer! Do you know that one?" He'd noodle a few bars. "No, that was Tender Land. Ugh. God." (Laughter.)

During Wright's Act 1, scene one pitch to his future mistress, I quoted the "New York, New York" rising fourths motive that he had first used in Trouble in Tahiti, and then in On the Town, on the word, "suburbia," "Nice lift," he said, "very Straussian. But you follow it up with stuff that sounds like Ned's little Frank O'Hara opera. Did I steal that from him for Tahiti or did he steal that from me? I can't remember. I know you're talking about theft by putting stolen music in his mouth, but you should come up with something else there."

At some point, I pointed out that I had been modeling the character of Wright musically on him, and the relationship between Wright and Sullivan on him and Blitzstein. He got it: "That's Maria. No, it's the orchestral play-in to the first scene of Marc's Regina," he mused aloud. "Well, yes, I stole it from Marc." Silence. "But he stole it from Aaron!" (Generous, warm laughter.)

It still felt, a few years later, at the family's Dakota apartment (the day Brow received its workshop run-through after Bernstein's death), as though he slouched in the low chair in the den, sipping a scotch, pulling on his plastic cigarette holder, growling one of the last things he said to me: "Play and sing that part again, baby--the part that sounds like Marc."

"Before I forget, I want to tell you that Marc used to like to sit over there," said David Diamond, squeezing my hand and pointing at a spot far down the lawn near the rose garden. We were sitting on one of the pews in the Yaddo Music Room. Life-sized full body portraits of the Trask children loomed over us like gravestones. The June 2005 air was lively. Late afternoon light streamed through the leaded windows.

Elaina Richardson had asked me to curate a recital of music by composers who had worked at Yaddo. Michael Boriskin and his Music from Copland House players performed. I wanted to honor David, with whom I had studied, so I programmed his early Flute Quartet. I also suggested that he be invited and, to everyone's astonishment, he agreed to come. He told me that he had wanted to visit Yaddo once more. I looked at David: his impeccably tailored gray serge sit hung loosely over his diminished frame. His blue shirt's collar was crisp. There was a large New Zealand-shaped liver spot on his scalp over his right eye. What remained of his hair was colorless. His skin was papery and luminous. His rheumy eyes brimmed with tears. A few days later, on 13 June, he died.

That day, however, David's observation was piercingly clear: "Marc cared," he whispered urgently. "When he composed Regina here, he could sing and play every note. He knew words. You remember I told you once that he rewrote the entire libretto for Lenny's Trouble in Tahiti without needing to change a note of the music?" (When David reminisced, the facts could sometimes be sketchy, but the point was always clear.)

In May 2007, I sat before the upright piano in the Acosta Nichols Tower studio, the one at which Marc had written Regina, writing with trepidation the title Amelia over what would become the first page of over four hundred pages of piano sketch of my breakthrough opera about flight and rebirth. A bird flew in through the open door and flew frightened circles high above me in the white cone of the ceiling. I got up and spoke quietly to the bird, "You'll be okay, friend. Everything will be fine. The door is open. Fly through it." As though on cue, the bird swooped down and glided back out through the door to safety in the surrounding forest.