When I discovered I was a chump, I'd only been married six months. A long-term Other Woman called to inform me of her existence.

She hissed, "I should've known he was cheating. I helped break up his last marriage."

I replied, "Oh my God, I hope I'm not pregnant," and at that she burst into tears. I thanked her for letting me know. I hung up. It was surreal, to say the least.

This woman, as it turns out, wasn't the only affair partner. She was just the most persistent. The affair had been ongoing for years, back to his first marriage. (He told me his first two wives cheated on him. Was I ever an idiot.)

It takes a special kind of person to be the Other Woman, and yet, I felt some pitiful need to compete with this phantom kook on the phone, of whom I knew nothing, other than she was f*cking my husband.

I asked my cheater: "Why didn't you marry her?"

He shrugged, "She's a bipolar alcoholic."

In retrospect, I didn't need to know anything about her. There were only two salient facts: (1) She didn't belong in my marriage, and (2) I didn't invite her there.

Oh, and she did her own version of crazy. I got drunken phone calls. Pranks. She signed me up on dating sites, for political campaigns, spam. She cyberstalked. She sent emails and signed them "Samuel Clemens." Yeah, she tried to ruin Mark Twain.

It was quite the pick-me dance-a-thon.

She called me a whore. I replied, "That's Mrs. Whore to you."

The only person who enjoyed this spectacle was the cheater. He was like a cat in cream. Oh, the drama! The kibbles!

Which brings me to my point -- please stop obsessing about affair partners. I know they suck. I know they're morally culpable and inferior and wear elasticized hair accessories last fashionable in 1989. They're also beside the point. Your spouse invited them into your life. Yes, they suck, oh how they suck. But in the Pantheon of Suck? Your cheater is standing on the winner's block holding the suck trophy. That's the person who betrayed you. Direct your fury there.

Now, if the affair partner was your sister or your best friend? Okay, then they get the suck silver or bronze. That's a double betrayal and that's horrific. But affair partners aren't special. They aren't glamorous or better than you. They're dim and they're available. That's it.

Refuse to Be a Hypotenuse

So why on earth do we engage in mortal combat over cheaters? Think about it. What exactly is the affair partner "winning"? Cheaters are not prizes.

But! But! He's going to be different for the affair partner! His very best twinkly self! And I'll miss out! And I've invested so much to just walk away now!

Look, I'm sorry about your sunk costs, but put your mind at rest -- your cheater is not going to be different for the affair partner. Cheaters don't have magical character transplants. They're still the same selfish people with crappy life skills. Thinking they will be different for someone else is just another way of believing the infidelity has something to do with you. It doesn't. It's not about whether or not the Other Woman has bigger tits or a trust fund, or if the Other Man earns more money and has straighter teeth (chances are he's a troll). It's about who is a better source of narcissistic supply. The answer to that is usually -- both of you. Cake.

Nothing delights a narcissist more than centrality. If your cheater has left for the affair partner, and you want to thwart their happiness -- playing the obstacle increases their happiness. Not to mention, it's keeping you from getting on with your own life. No, cheaters love a triangle (or a rectangle, hexagon, dodecahedron...)

Acting like cheaters are prizes makes affairs partner think they've won a prize! It makes you the foil to their star-crossed love. It gives them shivers of delight to know how much you care. Refuse to be a hypotenuse! So what if affair partners think they "won"? They think all sorts of moronic things. You don't control that. Be above this. Congratulate them on their good fortune -- winning a jerk.

People who are remorseful do not put you in a position of competing for their love. Ever.

Is the Affair Partner the Nexus of All Evil?

Everyone loves an arch-villain. On reconciliation sites, you see a lot of handwringing over the terrible machinations of the wily, predatory affair partner.

"Oh, he was a rake! An experienced seducer, he lures good, trusting women and casts them under his spell!" Or "She pursued him relentlessly when his defenses were down. He would never have slept with her if she hadn't thrown herself at him."

Adults have agency. You didn't make your cheater cheat, and neither did the affair partner. Cheating is a choice. It's a series of choices. However persistent and seductive affair partners are, they don't have superpowers. They can't make cheaters do things they don't want to do.

Cheaters often spin the narrative that they're just weak. "The devil made me do it!" That mean, mean woman made me cheat on you. It's all her fault.

And chumps fall for it, because it's so much easier to hate the interloper than it is to despise the person they married and share a life with. It also gives chumps a false sense of security. Well, if we just stop the menace that is the affair partner, life will return to normal. Nope. You're still stuck with a traitor. 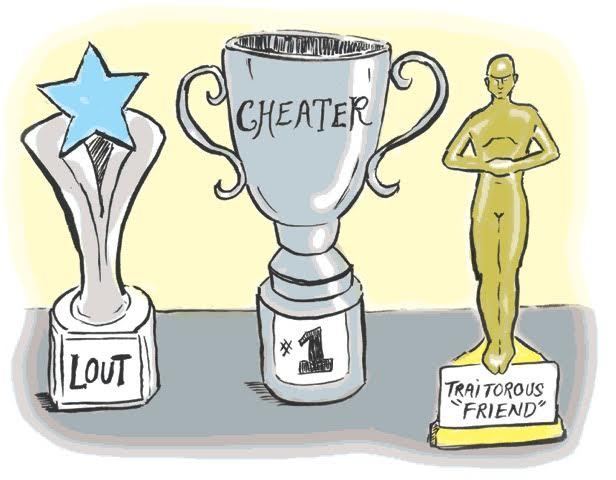 Excerpted from Tracy Schorn's new book,"Leave a Cheater, Gain a Life - The Chump Lady's Survival Guide." Schorn is the creator of the support site Chump Lady.

A fresh, snarky look at infidelity that's not focused on saving relationships after infidelity -- but saving one's sanity, "Leave a Cheater, Gain a Life" combines solid advice that champions self-respect, along with hilarious cartoons satirizing the pomposity of cheaters. Chump Lady shows you how to bounce back after the gut blow of betrayal and gives you hope for a better life ahead.

More:
divorceInfidelity
Newsletter Sign Up
A weekly guide to improving all of the relationships in your life
Subscribe to HuffPost’s relationships email
Successfully Subscribed!
Realness delivered to your inbox