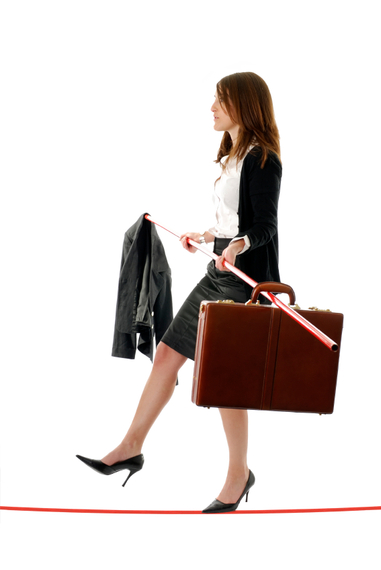 What is to blame for the fact that women (who earn over half of all degrees) in the U.S. are still not proportionately represented at the leadership levels of American business? As with any stubborn issue, there are many inter-connected causes.

The most fundamental causes -- and the hardest to change -- are what McKinsey & Co. calls invisible "mind-sets." They are invisible because they are unintentional and unconscious. (I listed three of these mind-sets in an earlier post.) The first is the "double bind." In a nutshell, it is this: If a woman behaves in a "feminine" way, she may be liked, but she may not be respected or seen as a leader. If she operates in a "masculine" way, however, she may be judged and disliked. The title to Catalyst's research paper on this topic says it all: "Damned or Doomed."

Most workplaces tend to be more masculine than feminine in many ways. For example, in communication style, the primary language of the workplace is firm and declarative and sounds confident. The feminine style is more humble; the speaker may qualify an assertion to avoid sounding "uppity." When a woman speaks in a feminine way, she may be talked over, not be heard and not be seen as a leader. Women naturally imitate workplace norms and the styles of those most successful in reaching the top. They learn to operate in more masculine ways. If a woman adopts a masculine approach too often, to too great a degree or at the "wrong" time, however, she may be penalized. Others may judge, "Who does she think she is?"

The dilemma shows up in other dimensions of the masculine-feminine continuum, including when a woman:
•In decision-making, drives a team to a goal rather than involving others and incorporating their ideas,
•Is energized by, and motivates others with, a work style that is competitive rather than collaborative,
•Influences by giving orders rather than through persuasion, or
•In handling conflict, is direct rather than indirect.

Women as well as men trap women in this lose-lose proposition.

What can we DO about the double bind? An unconscious mind-set is like the blind spot in your car. If you know about it, you can manage it and avoid danger. Being aware of this dilemma can enable you to monitor your automatic mental reactions and alter them. If your knee-jerk response to a confident woman is "What a tough woman," stop. Would you think the same thing about the identical behavior in a man? Or is there a double standard? You can consciously choose to widen the range of acceptable behavior for women.

What can women trapped in the double bind do? Women can whine about the double bind. Indeed, it is not "fair." It is, however, a reality -- today. We can accept it and practice shifting consciously between masculine and feminine styles. According to a Stanford study, women who can do this get more promotions than either women or men who cannot. As you move up the corporate ladder, you may find more freedom from the double bind.

Women can try to make others aware of this obstacle. I suggest they do so without judgment or blame, by noting that it is not intentional or malicious. Or we can respond to "coaching moments," like when my boss told me I had an "edge." I worked in a group of very tough men. I calmly asked him, "Compared to whom?" I was respectfully asking him if he would apply the term "edge" to my much "edgier" male colleagues.

Share your experience of the double bind and what you have done to minimize its negative effects.