Crowley is the chair of the House Democratic Caucus, and he was often named as a future leader of the party, when Minority Leader Nancy Pelosi (D-Calif.) retired someday.

The victory for Ocasio-Cortez, a 28-year-old Latina candidate with modest resources and views that would easily make her one of the most left-wing members of Congress, would be significant under any circumstances. That she won in the 14th Congressional District against Crowley, a leading candidate for House speaker in a Democratic Congress, is nothing short of remarkable. It was the first time Crowley faced a serious primary challenge in 14 years.

Her win is the most historic ouster of a congressional leader since former House Majority Leader Eric Cantor (R) lost his Virginia seat to tea party challenger Dave Brat in June 2014.

In his concession statement, Crowley said he would support Ocasio-Cortez in November.

“The Trump administration is a threat to everything we stand for here in Queens and the Bronx, and if we don’t win back the House this November, we will lose the nation we love,” he said. “This is why we must come together. We will only be able to stop Donald Trump and the Republican Congress by working together, as a united Democratic Party.”

Now @JoeCrowleyNY is playing guitar. He dedicated the first song to @Ocasio2018 — “Born to Run”
@ pic.twitter.com/U3sx6mth90

Ocasio-Cortez’s party Tuesday night, held at a Bronx pool hall with no stage, started small and quickly grew as it became apparent that she would defeat Crowley. In attendance was Cynthia Nixon, the actress and progressive candidate challenging New York Gov. Andrew Cuomo (D) in the Sept. 13 primary, as well as Zephyr Teachout, the law professor running for state attorney general.

What culminated as a celebration of progressive strength, however, began largely outside the national media spotlight. She went door to door introducing herself to voters, quietly putting together the operation needed to get on the ballot in a state with notoriously byzantine election rules. Her bid caught fire among a small and intense group of progressive activists.

But most national poll watchers viewed Crowley’s re-election as a foregone conclusion.

“Our district is overwhelmingly people of color, it’s working class, it’s very immigrant ― and it hasn’t had the representation we’ve needed,” Ocasio-Cortez, a second-generation Puerto Rican, told HuffPost earlier this month. Crowley, 56, who hails from a middle-class Irish family, has been in Congress for nearly two decades.

In beating the incumbent, the progressive millennial, who has never held elected office, also scored a victory for the wave of women running for office since President Donald Trump’s election ― following other notable primary victories so far for Stacey Abrams in Georgia and Lupe Valdez in Texas.

Ocasio-Cortez’s progressive platform includes ideas like a $15 minimum wage and Medicare for all, which have become more mainstream among Democratic Party leaders in recent years, as well as more radical proposals, like abolishing Immigration and Customs Enforcement and having a federal job guarantee.

Ocasio-Cortez’s victory is the biggest electoral coup to date for Sen. Bernie Sanders (I-Vt.) and his network of allied groups.

Ocasio-Cortez was an organizer for Sanders’ 2016 presidential campaign, and Justice Democrats, a left-leaning group formed by former Sanders staffers, was one of her earliest boosters. Our Revolution, a group Sanders founded as a successor to his campaign, also backed her.

Ocasio-Cortez will also be the only current member of Congress who is a dues-paying member of the Democratic Socialists of America.

The newcomer won despite her campaign coffers lagging far behind Crowley’s: She raised over $300,000, compared to about $3.4 million for Crowley.

Ocasio-Cortez touted her working-class roots and her campaign’s refusal to take corporate money in her bid to win voters over to her grassroots campaign.

Republicans immediately gloated at the results ― even though the party has almost no shot at taking the seat.

“Democrats have spent millions rigging primaries across the country but couldn’t spare a dime for poor Joe Crowley tonight,” said NRCC spokesman Matt Gorman. “House Democrats, hoping for a post-Pelosi era, are now left leaderless. The only person happier tonight than Nancy Pelosi is the NRCC.”

Ocasio-Cortez’s team made it a point to not take corporate PAC money, while Crowley accepted donations from corporate PACs and companies’ employees or owners. While about two-thirds of her campaign donations so far have been small, under-$200 contributions, less than 1 percent of Crowley’s funds were.

“I see people like me, who thought someone like me couldn’t be in politics,” Ocasio-Cortez told HuffPost earlier this month. “[They] now are saying, ‘Oh, wait, I don’t need to take money from corporations to run. Maybe I’ll run, too.’”

Ultimately, local politics likely played as much of a role in Crowley’s defeat as national cross-currents. Crowley is not only the fourth-highest-ranking Democrat in the House and a leading fundraiser for his colleagues.

As chairman of the Queens County Democratic Party, he is also one of the most influential figures in New York City politics. His role atop what is widely viewed as one of the last true political machines in American politics earned him the moniker “The King of Queens.”

Just as Crowley’s predecessor, Thomas Manton, tapped him to run in 1998 in a way that virtually assured Crowley’s win, Democrats hoping to rise in the populous borough had to go through Crowley.

Reporting in The Intercept documented ways in which Crowley had used his status to benefit himself and cronies. For example, attorneys tied to Crowley have won a disproportionate share of the legal business at the Queens County Surrogate’s Court, which processes the estates of Queens residents who died without wills.

The political post gave Crowley obvious advantages. As recently as last Monday, he held an official event at the Queens Library at Woodside, where other senior Queens officials praised him for helping secure an additional $6.5 million from the New York City budget to renovate the facility.

But it also bred resentment among working-class constituents who chafed at his top-down influence and harbored a sense that he had ignored their concerns about the rising cost of housing. It undoubtedly did not help matters that Crowley’s primary residence was in the Washington suburb of Arlington, Virginia.

As Ocasio-Cortez spoke at a news conference in East Elmhurst in Queens last week, several Latino supporters interjected with chants in Spanish, “Yes to the change. No to the machine.”

Speakers and attendees at the event, which announced the endorsement of the Pan-American Democratic Association in Queens, just as often cited Crowley’s role in permitting the construction of a Target facility nearby and fears of gentrification as they did his vote for the Iraq War in 2002 when explaining their support for Ocasio-Cortez.

Notwithstanding her staunch progressive views, in an interview with HuffPost after the news conference, Ocasio-Cortez insisted that she would welcome opportunities to work with Republicans. Two areas she sees as potential grounds for cooperation are the Dream Act and criminal justice reform.

Asked whether she would accept a meeting with President Donald Trump, Ocasio-Cortez was more reluctant.

“Probably not. I would probably want conditions. I would make demands,” she said with a chuckle. “I’m not gonna give him a photo-op because he wants it.” 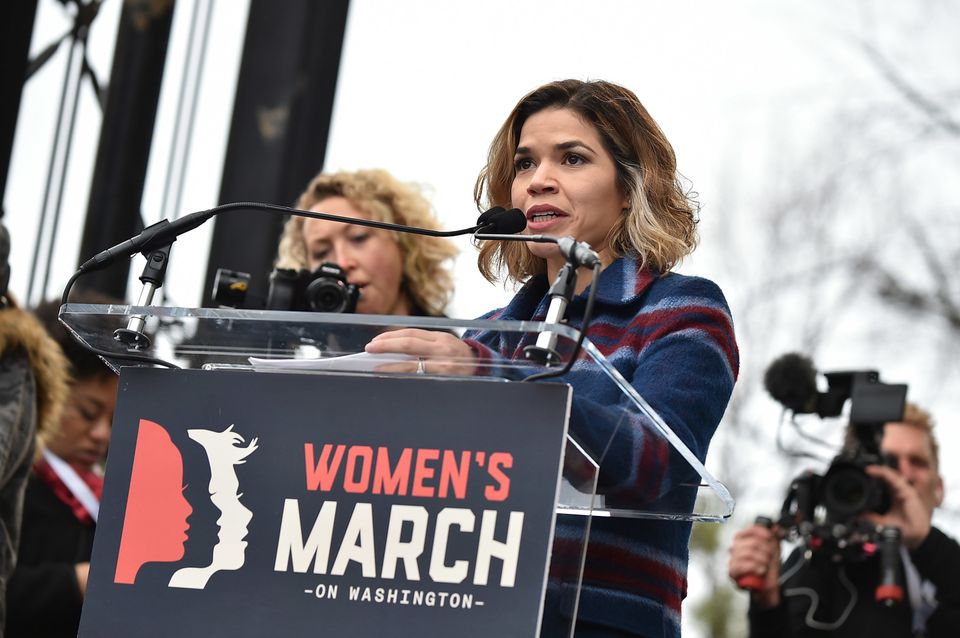