BERKELEY, Calif. (AP) -- Anti-Wall Street activists began rebuilding their tent encampment on the steps of the University of California, Berkeley student plaza Tuesday and cheered wildly when former U.S. Labor Secretary Robert Reich implored them to take a moral stand against the very rich owning so much of America's wealth.

The daylong strike and peaceful demonstrations against big banks and education cuts culminated in some 4,000 people rallying at the Reich speech on the steps of the same student plaza that first launched the Berkeley Free Speech Movement in the 1960s.

"The days of apathy are over folks," Reich, a professor of public policy at UC Berkeley, said to a roaring crowd at Sproul Hall. "We are losing the moral foundation stone on which this country and our democracy were built. There are some people out there who say we cannot afford education any longer, we cannot provide social services for the poor ... but how can that be true if we are now richer than we have ever been before?"

The protests were disrupted earlier in the day by a campus shooting in inside the Haas School of Business. Officials did not know if the suspect was part of the Occupy Cal movement, said Ute Frey, a spokeswoman for the university.

"I just hope it wasn't from the protest or the movement, because that's not what the movement is about," said Sadia Saif, a 19-year-old UC Berkeley sophomore.

The shooting didn't prevent thousands of students and demonstrators from gathering at the university to vote on a list of demands and await Reich's Mario Savio Lecture, named for the political activist and leader of the Berkeley Free Speech Movement of the 1960s. Savio's impassioned speeches on the same steps of Sproul Hall against the Vietnam War and racial inequality prompted thousands of students to join the movement.

"Every social movement in the last half century or more -- it started with moral outrage," Reich said, likening Wall Street to the bullies who battered him when he was an especially short kid. "You understand how important it is to fight the bullies, to protect the powerless."

Protesters also cheered as at least 10 tents were constructed on the steps, less than a week after baton-wielding police clashed with people who tried to defy a campus ban on camping.

Elizabeth de Martelly, a 29-year-old UC Berkeley graduate student, said she was inspired by Reich's comments about social movements born from moral outrage and planned to spend the night in the new encampment.

"That said, I want to see the movement to expand beyond encampments," she said amid the music, light shows and dancing. "But this is a powerful thing for the time being."

The Occupy Cal students were joined by hundreds of Occupy Oakland demonstrators who marched the five miles from Oakland to Berkeley along Telegraph Avenue, chanting, "Here comes Oakland!" Police cleared their tent city outside Oakland City Hall on Monday amid complaints about safety and sanitation, and arrested more than 50 people.

Occupy Cal's general assembly voted in favor of inviting the university's chancellor and board of regents to a debate in early December and sending the educational officials a list of demands, including a tuition rollback to 2009 levels.

They also voted in favor of rebuilding their encampment despite earlier violence.

On Nov. 9, police jabbed students with batons and arrested 40 people as the university sought to uphold a campus ban on camping.

UC Berkeley Chancellor Robert Birgeneau launched an investigation into allegations that campus police used excessive force. He said videos of the protests were disturbing, and he plans to grant amnesty to all students who were arrested and cited for attempting to block police from removing the tents.

Birgeneau issued a statement to the students and Occupy demonstrators, saying the university leadership shares in their anger and frustration over relentless tuition hikes and the growing burden on their families.

"We all share the distress and anger at the State of California's disinvestment in public higher education," Birgeneau said.

He called on the "political leadership" from Sacramento to come to campus to engage with him and student representatives in a public forum to debate the future of public education. "The issues require bold action and time is short," he said.

Over the past three years, the cash-strapped state has sharply reduced funding to California's public colleges and universities, which has led to steep tuition hikes, course cutbacks, staff layoffs and reduced student enrollment.

Oscar Varela, 21, a fifth-year economics major who helped organize Tuesday's demonstrations, was among the students who tried to block campus police from tearing down the campus encampment last week.

"We want to stay here to prove to the regents and state that we are part of this movement and that we want our tuition to go back to what it used to be, which essentially should be free," Varela said.

Earlier in the day, university officials said a female staff member reported seeing a man with a gun, who was shot by a university police officer within minutes. The condition of the 33-year-old suspect was not immediately known. His name was not released.

Dong Hwan Kim, 27, a senior, said he was terrified when he learned of the shooting.

"The shooting, in addition to what's happening here with the protests, makes the campus feel really tense," Kim said. "This is a historical moment, but it is also really scary at the same time."

Protesters descended on the university after ReFund California, a coalition of student groups and university employee unions, called for a campus strike and teach-ins.

"If the only people who can come here in the future are those who have money, it's going to hurt everyone's educational experience," said Daniel Rodriguez, 28, a graduate student who was conducting an introductory Spanish language class outside.

UPDATE: 11/16/11, 12:44 p.m. -- According to The Daily Californian, the student who was shot by UCPD for carrying a firearm was identified as Christopher Travis, a 32-year-old undergraduate transfer student. Travis died from his wounds in the hospital on Wednesday morning. According to The Daily Cal, there is no indication that the incident was related to the Occupy Cal protest. 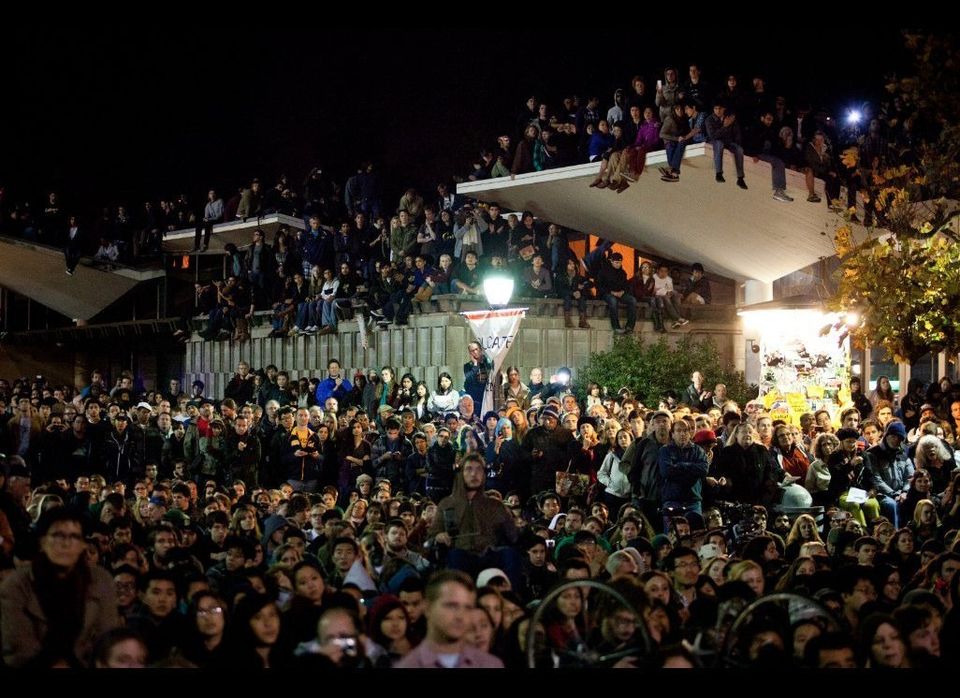