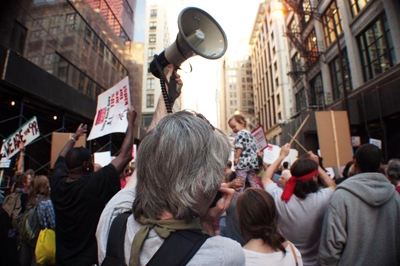 However, members of Occupy Chicago are acutely aware of how reductive and fickle the 24-hour news cycle can be. They know that it is impossible to create a soundbite to properly express the grievances of a diverse, leaderless coalition that allows for fatiguing -- almost endless -- debate of even the most trivial issues. At the same time, they acknowledge the importance of developing a coherent and sustainable identity, but they want to do so at their own pace.

Crisp autumn leaves fell onto the participants at the plaza and reminded those in attendance that Chicago's unseasonably warm fall is about to end. This fact is not lost on the Occupy Chicago participants who have spent their days and nights on the public sidewalks near the Chicago Board of Trade. They realize the need for a long-term plan.

The Occupy Chicago encampment sits precariously at the intersection of Jackson and LaSalle. Unlike the privately owned Zuccotti Park in New York that offers a feeling of quasi-permanence to the Occupy Wall Street encampment, Occupy Chicago looks and feels impermanent. Their encampment is almost completely mobile, and despite excellent coordination with the Chicago Police Department, they understand that a single phone call can sweep them from the streets instantly. Meanwhile, bankers and brokers mockingly blog that these "hippies" and "hipsters" will vanish with the first snow. 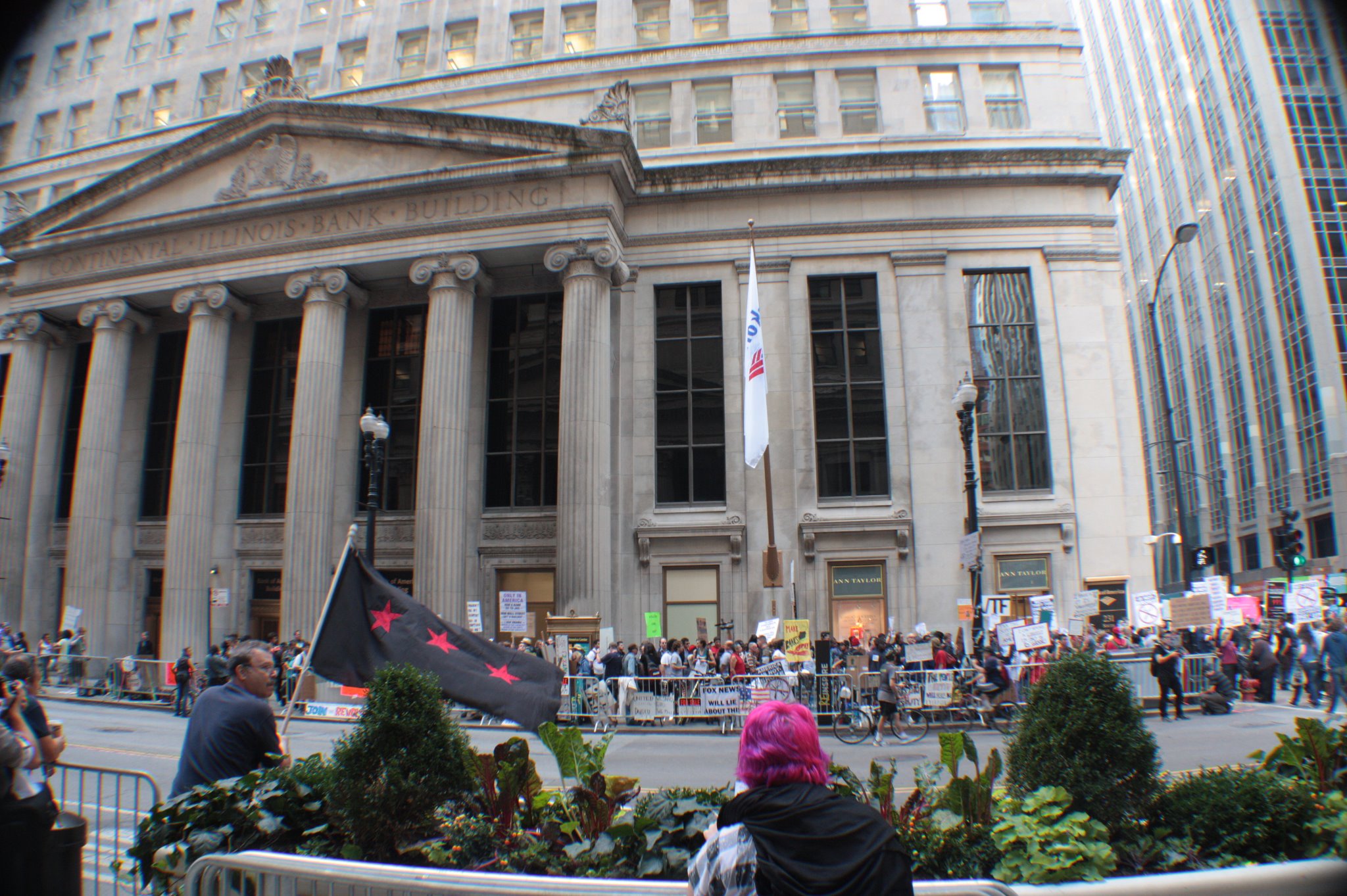 If the impending winter does not disband the movement, Occupy Chicago risks unraveling because of its own success. The recent surge in its ranks brings increasing diversity regarding the group's goals and tactics. But as the group begins to define its positions and strategies more starkly, some will almost certainly become disaffected or marginalized as factions and a prevailing ideology emerge.

Currently, some voices in the group embrace a doggedly anti-capitalist ideology that may alienate those who acknowledge the legitimate role that corporations can and do play in American life. While few (if any) in the movement sympathize with the wealthiest Americans or deify the wealthy as "job creators," most do not demand the dismantling of capitalism. In fact, the majority of the participants in the recent marches have simply asked that corporations behave morally by demonstrating care for their workers and for their constituent communities.

Another minority of voices lobby for an increase in acts of non-violent civil disobedience that lead to arrests, and perhaps unfortunately, violent confrontations with police. Arrests and violence will unify and embolden a small percentage of the coalition, but arrests and violence will also cause many who formerly supported the movement to stay home.

Others ask members to consider "dropping out" within society to create a viable alternative to the capitalist system. They propose the creation of self-sustaining communes fed by urban agriculture and committed to the support of their immediate milieu. Others oppose this by passionately arguing that individuals cannot change a system if they are not part of it.

For now, the occupy movement remains multivocal, and the previous opinions represent only a glimpse of the growing cacophony of voices at Chicago's General Assembly. In spite of this, the possibility remains that the movement could eventually be coopted for the benefit of some particular group or person. To date, the Democratic Party's support has been tepid at best, but as the 2012 election season approaches, politicians of either party could appeal to the movement for support. Even the warmly welcomed support of organizatons such as Jesse Jackson's Operation PUSH and the Service Workers International Union (SEIU) -- both of which have infused much needed publicity and clout -- could subsume the voice of the Occupy Chicago movement.

What the days and weeks ahead hold for the Occupy Chicago movement are unclear. Based upon an unratified draft of the group's preamble and their emphasis on staging "teach-ins," not much. Their preamble's emphasis on "recognition of mass injustice" evokes a feeling of solidarity, but "recognition" will not put the foreclosed back in their homes. The upcoming teach-ins are necessary for some, but the underserved communities of Chicago do not need a lesson on the downfalls of capitalism from the University of Chicago to know that they have been victimized by the rages of globalization.

For now, sadly, Occupy Chicago feels more like a half-rate consciousness-raising organization than a social movement. Like Hamlet, who spends his days gathering evidence for a crime everyone can see was clearly committed by his uncle, Occupy Chicago expends too much time and effort articulating the glaringly obvious inequity of America's economic system.

The people of Chicago and the world are poised to act. The Occupy Movement needs a single, clear, actionable demand to rally behind.