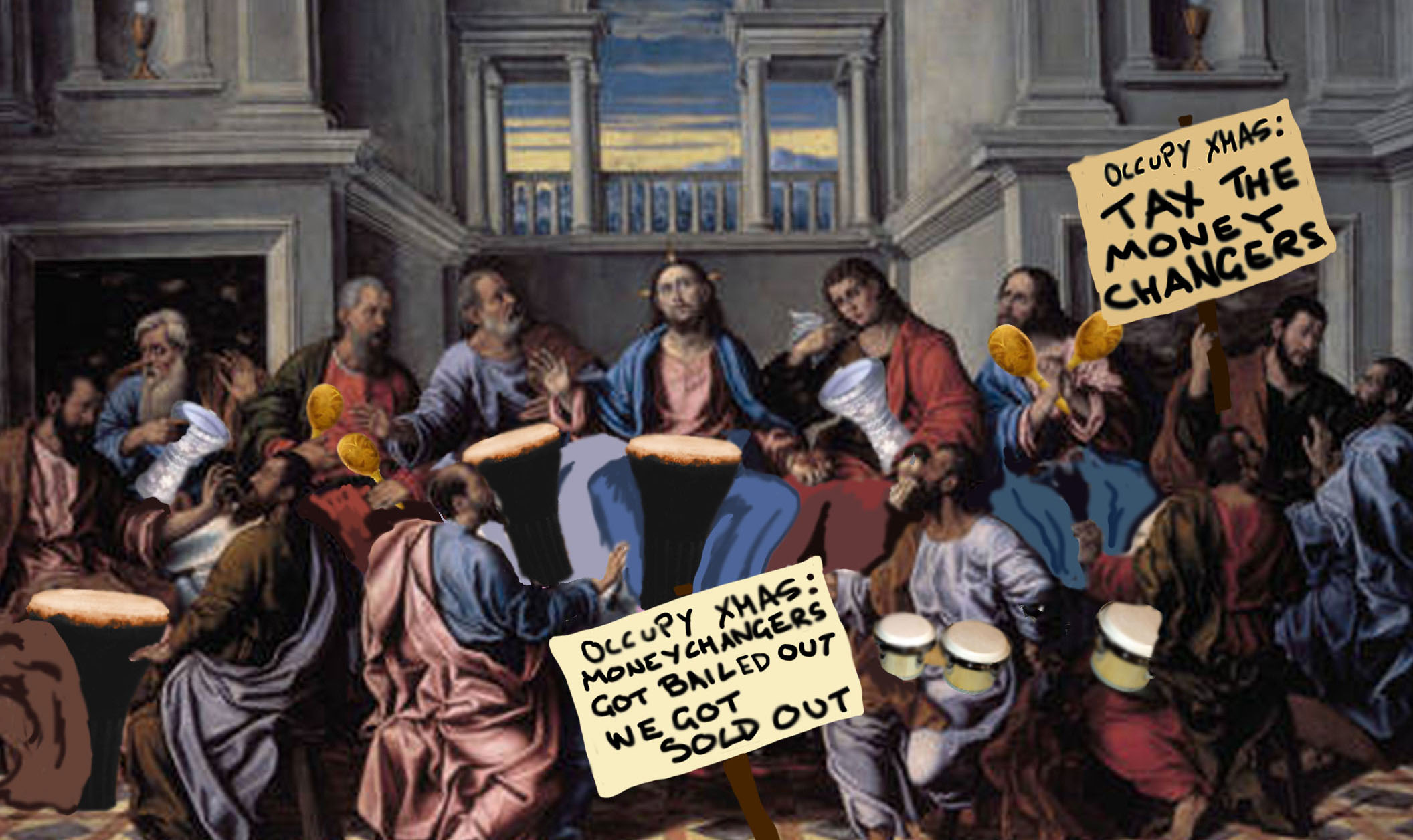 It doesn't matter whether or not you believe in God or which faith you follow if you do. Here's a question worth asking this holiday season: Would Jesus be an Occupy demonstrator?

The Bible suggests that He would.

A few years ago I was driving through the back roads of Alabama listening to Christian radio and I heard a preacher say that "Satan's name in the world today is 'God As I Understand Him.'

"But know this, my friends," said the preacher. "When you hear the phrase 'God As I Understand Him' you're hearing someone invoke the name of Satan."

As the white Southern Baptist railed against liberalism I came to a little town where poor African American women were carrying heavy parcels in the blistering August heat. I saw men lined up outside an unemployment office and people waiting for buses in the blistering sun. I saw run-down shacks, closed storefronts, and vacant lots.

The preacher was saying that God can only be found through institutionalized churches, the kind that tell their followers how to vote. As he droned on I saw hunger, deprivation, and poverty all around me.

God - as I understand him - wouldn't like that. As William Blake once wrote, "That Vision of Christ which thou dos't see/is my Vision's greatest Enemy."

The Power and the Glory

Look, I'm just as sick as other people are of seeing the word "Occupy" appropriated for everything from partisan politics to self-promotion. But it's hard to describe Jesus' action against the moneychangers in today's terms without calling it "Occupy the Temple."

By riding into Jerusalem on a donkey accompanied only by his ragged followers, Jesus was proclaiming a spiritual insurrection of the poor and common people - the 99%, if you prefer - against the wealthy and privileged. When he came to the Temple he overturned the moneychangers' tables and drove them from sacred ground with a "whip of cords."

A"whip of cords." And all that today's protestors are doing is making themselves visible. There's no violence against anyone. And yet the howls of outrage can be heard from the oak-lined boardrooms of Wall Street to the hypocritical pulpits of right-wing preachers.

Jesus was trying to reclaim his Jewish faith, the faith of his nation, from a clique of clergymen who had colluded with the unjust government of their day for their own purposes. The Romans and the clergy had formed a cynical alliance designed to increase their own power and influence by serving the few at the expense of the many.

Today's financial elite isn't satisfied just to make billions at the expense of others. They want to be immune from criticism, too. Goldman Sachs' CEO says it's "doing God's work." An investment banker desecrates the memory of the Holocaust's victims by saying that ir would be like Hitler invading Poland if he were asked to pay the same tax rate as a cop or a firefighter.

They wouldn't like the messages in the Old or New Testaments or the Talmud. These holy books are all pretty clear in their assessment of unproductive wealth. The prophet Ezekiel put usury on his list of "abominable things." Jesus drove the moneylenders away with that whip.

Sarah Palin says that "US law should be based on the God of the Bible." As they say, Be careful what you wish for.

Some people may find it sacrilegious to depict Jesus and His disciples in a drum circle, protesting the 1% of their time. But if you read the New Testament with an open mind, it's not hard to conclude that the real sacrilege is to use the name of Jesus to support wealth, power, and privilege.

God as they understand him bears no relationship to the one we find in Scripture.

Eye of the Needle

Like a good Jewish mother, Mary liked to brag about her son's talents and his lineage. In Luke 1 she says of God the Father,

... he hath scattered the proud in the imagination of their hearts.
He hath put down the mighty from their seats, and exalted them of low degree.
He hath filled the hungry with good things; and the rich he hath sent empty away.

And you can almost hear the conservative Christian preachers gasping: Does she mean the job creators? She certainly means the people they call "job creators." And her son said "it's easier for a camel to pass through the eye of a needle than for a rich man to enter Heaven."

(By the way: If they're "job creators," where are the jobs?)

The Jesus who turned water into wine was undercutting the official clergy, telling his followers that every individual could have a personal experience with the transcendent. In other words, he was urging them to discover divinity directly by experiencing "God as they understand him." Would Jesus recognize those who speak in his name? Or would he say "Depart, I never knew you"?

Most scholars agree that there was a historical Jesus, whose life and death was recorded by the Roman historian Josephus in the year 75 CE. Moderate Christians see him as the Son of God who clothed the homeless, healed the sick, and fed the hungry. Many Jews accept him as a great Jewish teacher. Muslims revere him as a prophet. Hindus see him as an avatar of God.

There are also many atheists and agnostics who accept him as a great moral leader. "I wouldn't want to live in a world where the Sermon on the Mount didn't exist," said prominent atheist Kurt Vonnegut Jr. Jackson Browne sang of himself as "a pagan who stands with the Rebel Jesus."

This is the time of year when those of us who revere him in these different ways are told we must submit to an endless barrage of messages about their authoritarian, right-wing Jesus. If we don't, we're told that we're part of a "War On Christmas."

If they're looking for a war on their Christmas, we say Bring it on! The next time someone you know spouts their distorted, politicized sermons, why not hit 'em with the Christmas Love Gun? Here's how to use it:

Time of the Season

There's something beautiful about a time of year that's set aside for reflection on greater things, and for kind words and deeds to others. If it's gentler on you to hear the words "Happy Holidays," then may your holidays be happy.

But if you don't mind re-occupying the language of the spirit and reinfusing it with its original meaning, here's our heartfelt greeting for the season:

Death of a Torture Victim