WASHINGTON -- At least 60 protesters were arrested on K Street NW, the historical lobbying hub of the nation's capital, as they blocked four key intersections, shutting down the street for much of the afternoon Wednesday.

Lasting more than an hour, a standoff between Occupy Wall Street protesters and D.C.'s Metropolitan Police Department resulted in at least three dozen arrests near Franklin Square at 14th and K Streets NW. Police used horses for crowd control, and picked apart protesters who linked arms and went limp with their bodies.

Police on the scene did not have a complete count of how many were arrested along the K Street corridor on Wednesday, but the number was reported by National Lawyers' Guild observers and protesters to be near 60.

Most of those arrested were charged with blocking a highway, as Occupy protesters began setting up tents and quite literally occupying K Street, blocking all traffic on the heavily-traveled downtown thoroughfare that is also Route 29. Metrobus and D.C. Circulator bus services were impacted.

Occupy DC protesters had marched through the rain to meet up on K Street with "Take Back the Capitol," a union-backed protest organized by groups like OurDC, the SEIU and Rebuild the American Dream, around 12:30 p.m. Immediately upon arriving and swelling in number to nearly 700, the protesters took over the intersection of 16th and K streets.

Members of Occupy DC began to get frustrated, however, with Take Back the Capitol's attempt at crowd control. Occupy DC protesters, joined by a large number of Occupy Wall Street protesters from at least a dozen other states, began to spread to the next intersection at 15th and K Streets, adjacent to Occupy DC's home base of McPherson Square.

Within an hour, Occupy protesters had blocked three intersections along K Street, stopping all traffic. Police rushed to keep up, but did not try to stop the protesters. To the contrary, a mix of city police, park police and Department of Homeland Security officers helped prevent cars from trying to drive through the protesters. At one intersection, protesters tipped over newspaper boxes to use for blocking traffic and standing upon.

As protesters began forming lines along two sides of the 14th and K intersection, police gave them three warnings using a loudspeaker before moving in.

Protesters decided to link arms and were arrested without major conflict. D.C. cops then used three police horses to move the crowd out of the street.

After the first arrests, Occupy demonstrators laid down and linked arms in a line of more than two dozen people.

Approximately 100 protesters with Occupy DC marched on Podesta Group's G Street NW headquarters downtown at 11 a.m. They chose Podesta because the firm has worked for BP, Wells Fargo, Bank of America, and many other notable clients. The firm was co-founded by John Podesta, former chief of staff to President Bill Clinton.

Take Back the Capitol marchers protested at the offices of Verizon, GE and the American Bankers Association. Most of them marched away from the Occupy DC-lead group at 14th and K Streets before the showdown with police began.

Many protesters present traveled from other Occupy Wall Street-inspired protests in states from Texas to California, Wisconsin and Massachusetts for a week of protests in Washington. Some told HuffPost they got rides to D.C. by taking advantage of the SEIU's buses. 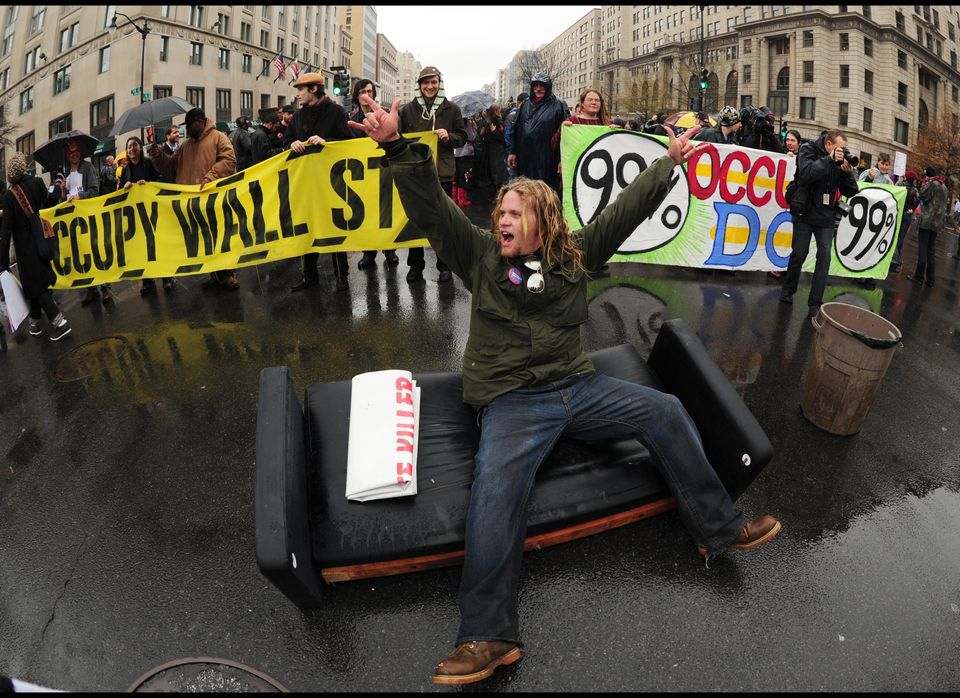