Denver's City Council is considering an ordinance to "ban unauthorized camping" throughout the city, The Denver Post recently reported, and critics of the controversial bill say it is criminalizing homelessness.

If passed, it would be illegal for anyone to sleep in sleeping bags, tents, or other constructed outdoor shelters anywhere where camping is unauthorized, like: alleys, sidewalks, public city parks or outdoor malls. Namely, where some of the city's homeless bed down for the night.

Mayor Michael Hancock, who has experienced periods of homelessness in his youth, says that the enforcement of this ordinance will be balanced and that it "provides us with additional tools to help those most vulnerable among us" and will be "paired with the comprehensive services necessary for short and long-term support," according to The Denver Post.

Hancock elaborated in an April 2 letter about the ban on so-called "urban camping":

Having been homeless as a child, I will always take a thoughtful and compassionate approach to this
issue. While the proposed ordinance would prohibit camping on public and private property without
specific permission, I am also insisting on safeguards to protect people from unfair or unjust treatment.

However, the city's shelters may already be maxed out. Bennie Milliner, executive director of Denver's Road Home, a homeless advocacy group aimed at ending homelessness in Denver, told Westword that even if the city doubled its current shelter capacity, it would still not reach the necessary number.

Occupy Denver, who would also be deeply affected by such an ordinance, have written an open letter to Mayor Hancock calling on him to and the City Council to defeat the ordinance.

Read Occupy Denver's entire letter to Mayor Hancock below and watch a video reading of the letter above, (formatting and emphasis in letter retained, not added, from Occupy Denver's open letter).

We are responding to your letter dated April 2 about the proposed “urban camping” ban. We are sorry to learn about your experience of homelessness as a child. We have heard the stories of our homeless sisters and brothers who have gathered with us and we know how painful life can be for them. Undoubtedly your experience will help you shape a thoughtful and compassionate response to this ordinance.

As we read your letter, we noticed that it failed to mention two critical realities:

First, the letter made no mention of the fact that we’re in the worst economic decline since the Great Depression. According to the Homelessness in the Denver Metropolitan Area – 2011 Point in Time Study, there are now 11,377 homeless men, women, and children in Denver. Unemployment and housing costs are the two major reasons for homelessness.

Second, the letter made no mention of the fact that experts on homelessness in Denver believe the city does not have the funding or the infrastructure to implement the “urban camping ban.”

Denver’s Road Home draft response plan to the “urban camping ban” demonstrates that the city is far from ready to implement this ordinance: “In general, community partners and service providers are stretched to capacity. We have very limited capacity for mental health resources especially. The National Alliance to End Homelessness is conducting a Shelter Review with a final report expected June 1, 2012 which will identify shelter specific needs.”

The lack of funding and infrastructure to implement the “urban camping ban” will lead to the criminalization of our homeless by council fiat. In a city struggling to better identify and overcome police brutality, it is difficult to see how our homeless sisters and brothers will be protected from “unjust treatment” and “punitive action.”

Mayor Hancock, as our elected representative, we at Occupy Denver call on you to do the following:

One of the most troubling things in your letter is the suggestion that this ordinance is a done deal: “We are also hard at work to ensure our 1,400 police officers are well-trained to implement this ordinance with the right goal in mind: getting people to the services they need.” Albus Brooks, the council member putting this ordinance forward, told several Occupy Denver activists on March 23rd that he had already secured the votes to pass the ordinance. He clearly stated that regardless of positive alternatives proposed, which he invited us to submit, that he would still push forward with criminalizing our homeless sisters and brothers. It is hard to see how input from the citizens of Denver can have any meaningful impact if this ordinance is a foregone conclusion.

So often we see our elected representatives pander to corporate interests to protect campaign funding. Corporate and business interests in Denver coalesce in the Downtown Denver Partnership, an organization that believes our homeless “will drive future conventions, tourists, residents and businesses from downtown.” The opportunity to obtain funds for campaigns and city services from corporations represented by the partnership should not tempt politicians away from their duty to serve and protect our homeless. At Tuesday’s April 3rd ordinance hearing, President & CEO Tamara Door represented the partnership’s view of our homeless sisters and brothers, saying: “It’s impacting businesses and the perception of our communities.” We at Occupy Denver call on you to place social justice ahead of economic privilege.

3. Follow the lead of other cities and pursue justice-based alternatives to the criminalization of our homeless

The report makes the following recommendations:

Occupydenver Homelessness We Are The 47 Percent Occupy Denver Denver 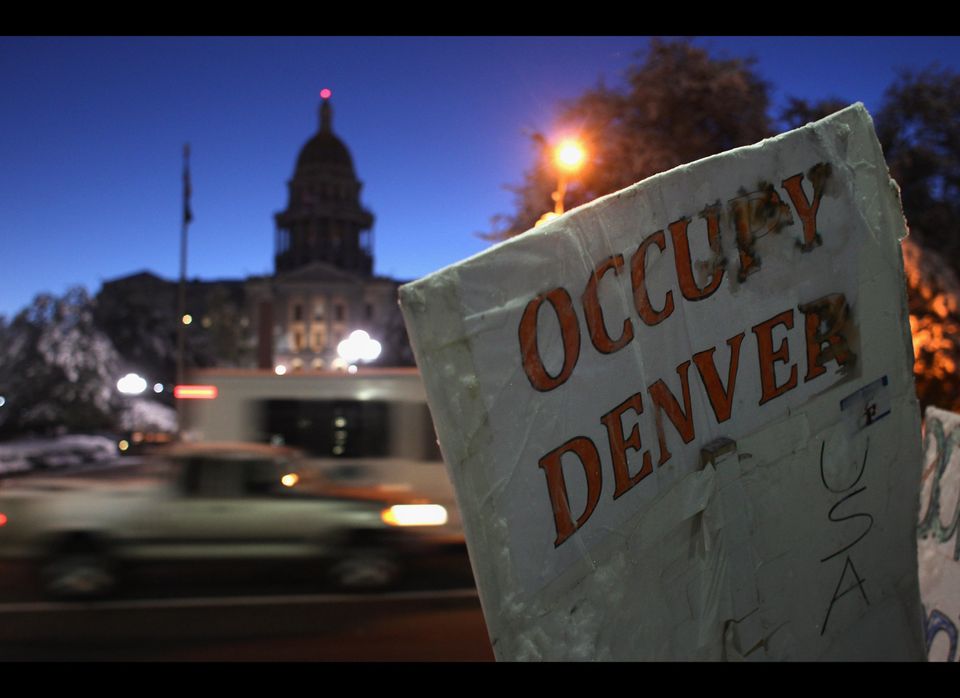