Today I'm delighted to announce the publication of the Huffington Post Media Group's fourth e-book, OCCUPY: Why It Started. Who's Behind It. What's Next. Here is my introduction to the book.

In 2012 Americans will go to the polls and vote for who they want to represent them in Washington. But as 2011 showed, the real political momentum is not to be found in Washington. Our institutions have let us down, not only by failing to prevent the biggest financial crisis since the depression but also by only producing suboptimal solutions at best to the multiple problems we're facing.

In fact, the crisis itself was more of a symptom than a cause. The trends had been in motion for decades: the decline of the middle class, growing inequality and downward mobility. But in 2011, with the credibility of our political system in tatters, something happened. People said "enough," and decided to take matters into their own hands. Time captured the moment by making the protester person of the year for 2011.

At the beginning of 2011, the tectonic shifts that would define the year had only just begun to rumble. Mohamed Bouazizi, a poor Tunisian fruit vendor, had yet to douse himself in paint thinner and ignite a revolution -- one that would be the first of many. Egypt's President Hosni Mubarak sat comfortably poised to enter his fourth decade of dictatorship. Spain's "Los Indignados" had not yet taken to the streets of Madrid. And very few people, aside from financial workers on their lunch breaks, were aware of the existence of Zuccotti Park, a small concrete plaza in New York's Financial District that would soon become the beating heart of Occupy Wall Street.

Occupy began quietly enough -- a few activists and a Twitter hashtag eventually led to a couple hundred people gathering in Zuccotti Park on September 17, 2011. But instead of simply being a little-noticed blip on the news radar, the protesters stayed in the park and on the screen. And then the movement began to grow outside the park, spreading to dozens of cities and towns and university campuses across the country.

The message of OWS was broad: the status quo is broken, the economic system rigged to unfairly help those who least need it, and we desperately need change. Some criticized the movement for not immediately having tangible, concrete goals. But, in fact, the simplicity of the message was part of what fueled its growth. Its appeal crossed party lines, generational lines and even class lines -- attracting, as CNBC's Keith Boykin put it, "high school-aged kids with their parents, college students in their school sweatshirts, men in business suits, mothers with baby carriages, people with jobs, people who were unemployed," and "white-haired retirees."

Suddenly, three years after the financial crisis plunged the country into recession, Americans were coming together to protest, echoing Frederick Douglass's truism that "power concedes nothing without a demand; it never did and it never will." By the time President Obama, at a December speech in Osawatomie, Kansas, identified inequality as "the defining issue of our time," he was not leading the charge, but joining the chorus -- the Occupy Wall Street protesters had been saying the same thing for nearly three months.

The Occupy movement isn't just a challenge to our political system, it's a response -- a response to the fact that millions believe our system is broken and unable to craft solutions that would reverse the growing inequity and injustice that are fundamentally changing our country. It was a response to the growing feeling that the essential compact of the American Dream -- if you work hard and play by the rules, you'll be rewarded -- could no longer be trusted. And not only is our political system unable to repair it, our political institutions were complicit in the breakdown.

And the response of our political leaders to those who simply want the system to do what it's supposed to do has been revealing. The Occupy movement has served as a test -- a national MRI -- that has allowed us to check in on the health of our democracy. The results are sobering. It's clear that Washington can't come up with the needed changes that would reverse these destructive trend lines, and help align the interests of Wall Street with the concerns of Main Street.

Rather, what the movement, and the response to it, has shown is a governing class almost completely disconnected from those it purports to represent. Instead of acknowledging the truth of the critique and setting about finding ways to act on it, the response by local governments seems more like that of burglars who got surprised by the police and decided to pepper-spray their way out.

Though in this case, the political system is a burglar robbing his own house. This is why much of the success of the Occupy movement can be attributed to the fact that it began outside the system. In an era where people hunger for authenticity, OWS was not top down -- it wasn't organized by any one party or institution.

Though the movement has been cleared out of many parks, this was never about land or territory. And even if it ended tomorrow -- and it's certainly not going to -- it has changed the national conversation in ways that would have seemed unthinkable even a year ago. Occupy has made people ask fundamental questions about our political and economic systems, and about whether or not those systems are working. It's made people think about what America should stand for, about which values it should reward and which values it should punish. It's made people realize that there must be a better way to organize a free market, capitalist system -- one that could be both more productive and more fair.

"This peaceful grassroots movement has succeeded in raising awareness about growing income and wealth inequality and, more generally, a system that seems better at serving the privileged few than enabling jobs and income growth for the many," writes Mohamed El-Erian, CEO of PIMCO, the world's largest bond fund. It has made people ask questions. And, increasingly, they don't like the answers. This is no small feat in a country that loves to be distracted.

One sign it's changed the way we think about the economy is that "the 1 percent" vs. "the 99 percent" has earned a permanent place in the national lexicon. The editor of the conservative New Hampshire Union Leader used it when he endorsed Newt Gingrich's presidency: "Gingrich is going to have a better time in the general election than Mitt Romney. I think it's going to be Obama's 99% versus the 1%, and Romney sort of represents the 1%." (Never mind that he was implicitly claiming that Newt "$500,000-credit-line-at-Tiffany's" Gingrich is not the 1%.)

Can you imagine that kind of language being used by Republicans a year ago?

In this book, you'll find the results of three months of near obsessive reporting, the best of dozens of reported pieces and hundreds of live blog post on what might be the news story of the year. We start with HuffPost reporter Matt Sledge, chronicling the history of the protests, then step back to look at the larger issues -- such as the financial and foreclosure crises -- which set the stage for OWS, with great pieces by Arthur Delaney, among others. The book's second section focuses on the people and places of OWS. Saki Knafo's series, "Occupy Wall Street: The Faces of Zuccotti Park," tells the stories of the individuals behind the movement -- from hitchhikers to professors -- while Jason Cherkis tracks the protests geographically, 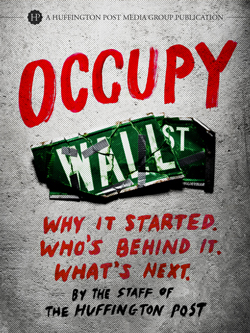 looking at the dozens of Occupy sites that popped up across the country. And we conclude by trying to place the movement in a larger context -- how it's been portrayed, the political effects it's had, and, most importantly, where it's going. Because, in the end, it's clear: we're in a real crisis, with lots of work to do, but there is also plenty to be hopeful about.

This book is about the beginning. When future histories of Occupy are written, this will be just the first chapter.

As George Bernard Shaw put it: "All progress depends on the unreasonable man." The Occupy movement has shown what can happen when people use some unreasonable methods to achieve eminently reasonable goals.

You can get OCCUPY, which was created and distributed using BookBrewer, at Amazon, Barnes & Noble, and Kobo.