The house at 4404 Cedar Ave., in south Minneapolis, sits a little ways back from a leafy road. An American flag flies from the front door. When members of the Cruz family moved in seven years ago, they painted each room a different color and planted the backyard with peppers, tomatoes and corn.

Now the front door bears the scars of a recent encounter with a battering ram, and sheets of plywood cover the windows. For the past nine days, police and protesters have been fighting over the house in an escalating showdown that has sent ripples of excitement and outrage through the neighborhood, the city and the nationwide Occupy movement. Some say this protest is emblematic of a new direction for the Occupy movement: an increased focus on using "direct action" to help people on the front lines of the financial crisis.

The standoff began after 26-year-old Alejandra Cruz, her parents and her brother, David, invited a group of activists to move into the house. Alejandra had known them for a few years. Her family came here from Mexico City when she was a kid, and for the last decade she'd been involved in a local campaign for the DREAM Act, the proposed legislation that would grant legal status to undocumented immigrants who arrived in the country as minors, and who graduate high school and pursue higher education or serve in the military.

As an immigrant-rights activist, she'd fought for the right to stay in the country. Now she needed her activist friends to help her fight for the right to stay in her home. Her family had lost the title to their house through what she says was a glitch in an online banking system. In February a representative from the bank told them they had 48 hours to surrender the home to its new owner, Freddie Mac.

Hoping to avoid a confrontation with the police, the Cruzes packed up and moved out in April. But no sooner had they left than a rotating group of about 50 activists moved in, spreading sleeping bags and blankets on the living room floor. They stayed there more or less comfortably until last Wednesday, when a group of deputies from the Hennepin County Sheriff's Department tried to evict them. Some activists chained themselves to a railing and other objects, and eventually the deputies backed away.

Since then, representatives from the Hennepin County Sheriff's Office and the Minneapolis police department have raided the house five times, making 23 arrests.

Every time police succeeded in clearing out the house, the protesters regrouped and returned in larger numbers. During the most recent raid, a week after the first one, about 100 people formed a human chain around the house, according to protesters. The police arrested 14 of them.

For the Occupy movement, the standoff provides a dash of excitement -- something that's been conspicuously absent from many of the actions that the activists have staged since police around the country put an end to the movement's early phase as a series of encampments in public parks and plazas.

For the last few months, protesters have organized dozens of marches under the Occupy banner, and they got thousands of people to come to Chicago two weeks ago during the NATO summit. But a march is not an occupation. And it was an occupation, in Manhattan's Zuccotti Park, that set the whole thing off in the first place, turning the movement into a major national news story.

The spectacle of a small, unarmed band of people holding ground against a powerful authority might resonate with people in ways that a conventional street protest might not. Perhaps that's one reason why many in the Occupy movement see this sort of tactic as key to the movement's future success.

Another reason: The activists aren't merely holding up signs and shouting slogans about the failings of the financial system -- they're trying to help members of a family who, they say, have suffered a direct blow at the hands of that system.

The Occupy activists who took over the Cruz home call themselves Occupy Homes MN, a group that falls under the umbrella of a national movement called Occupy Homes.

Since its first appearance in October, Occupy Homes has sprouted offshoots in about 100 cities, from Atlanta to Detroit and Los Angeles, and helped thousands of underwater homeowners fight for their homes.

Given the movement's somewhat fractured and informal nature, it's hard to know how many homes have been saved, Shan said. In any case, he downplayed the importance of that statistic. "When people see one house occupation at a time, that's not going to get us to where we need to be. We want 15 million underwater homeowners to see this and think, It's possible."

As it happens, the Occupy Homes movement began in the same city where the Cruz family's drama is now unfolding. It was in Minneapolis that Newby, an organizer for a local nonprofit group called Neighborhoods Organizing for Change, asked a homeowner in October if she would be willing to ask Occupy Minnesota to come and "occupy" her home.

The homeowner's name was Monique White, and she's since become somewhat of a celebrity in activist circles and a leader in the Occupy Homes movement.

Her story of her improbable rise to prominence begins in January 2011, when US Bank foreclosed on her house in north Minneapolis. The home's value had dropped from $123,00 to $30,000, according to an appraiser hired by White's supporters.

By the time Newby floated the idea to her, she had run out of all other options. Soon after, she showed up at a general assembly at the Occupy encampment and asked the activists there to defend her home from eviction. "It was an unanimous eureka moment for everybody there," Newby recalled.

About 50 people moved into her house and pitched tents outside. In the meantime, protesters, lawyers and others put pressure on the bank, and reporters drew attention to her cause.

Last month, White stood up in front of 2,000 people at a US Bank shareholders meeting and demanded of the institution's CEO, Richard Davis, "What are you going to do for people like me?" The next day, White and the bank agreed on a loan modification plan.

Newby said he thought the movement had identified a "vulnerable spot" in the financial system. "It's that human aspect," he said. "When humans have to interact with other humans and confront their crimes directly they often feel compelled to fix it." And that's why some activists in the Cruzes' fight say they've been reaching out to executives at PNC bank, the company that originally owned their mortgage, and at Freddie Mac, whose agents bought the home in a sheriff's sale.

Last week, activists with the Pittsburgh branch of Occupy Homes paid a visit to PNC Bank's Pittsburgh headquarters, where they say a vice president of the company committed to helping the Cruz family work out a loan-modification plan. A representative from PNC Bank said the bank would not comment on the case.

On Thursday, Alejandra Cruz said the mayor of Minneapolis, R.T. Rybak, contacted her family, saying that Freddie Mac wanted to "sit down at the table" and work out a plan. A spokeswoman for the mayor said she could not confirm this.

The Cruzes say that they fell behind on their payments because of an online banking issue. The system failed to deduct a payment from their account, they say, and when they went online the next month to pay the new bill, they learned that were now two months behind in payments. All four members of the Cruz family work and have contributed to the mortgage, but couldn't afford to dig themselves out of the $3,200 hole.

The Cruzes initially turned to a nonprofit organization for help, but the group only made matters worse, assuring them that it would take care of things while letting the bills pile up, they say. The group declined to comment on the case. In any event, the family eventually looked for help from a less conventional source. "We got in contact with Occupy Homes," said Alejandra. "And that's pretty much how everything started working out in a better way."

Earlier this week, the mayor released a joint statement with Minneapolis Council Member Elizabeth Glidden calling for banks to prevent foreclosures "through broader and more aggressive actions.” Activists saw this as a sign that city leaders were tiring of spending public money to protect the banks' interests.

In an interview with The Huffington Post, Glidden seemed to say as much. "The city serving as a private security company is not the role for our government," she said.

Han Shan saw the statement as a big step for the Occupy Homes movement. "It could be seen as a de facto declaration of a moratorium on evictions. Occupy Homes Minnesota has changed the cost-benefit analysis of foreclosures."

Whatever happens at the city level, the protesters say they will keep coming back to the house until Freddie Mac offers the Cruzes what they consider a reasonable payment plan. On Friday afternoon, they returned to the home for the first time since the police had kicked them out two days before. There they found more than 30 police officers waiting for them, they say -- a force equipped with batons, bicycles, over two dozen marked and undercover squad cars and a paddy wagon. So they held hands and surrounded the police while a pastor from church across the street led a prayer, and then they grilled burgers in the church parking lot. They say that if the banks have not worked out a solution with the Cruz family by Monday, June 11, they'll come back again.

View photos of a standoff at the Cruz home in late May. 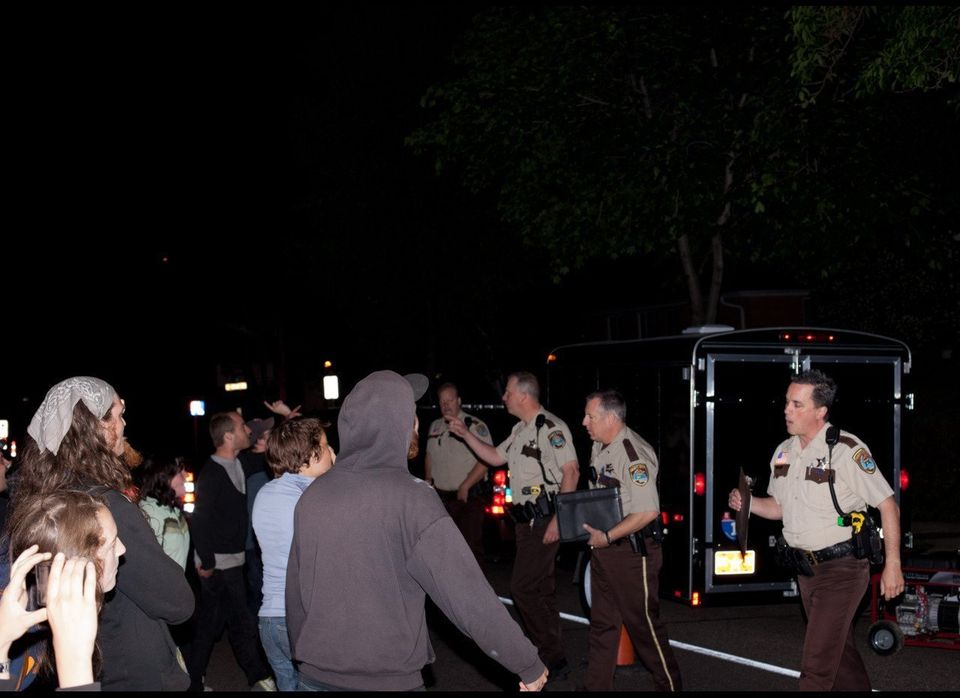 1 / 7
Foreclosure Battle In Minneapolis
There's a tense standoff between protesters and police at the Cruz family's house in Minneapolis. Occupy activists have stayed at the home for nearly a month. The foreclosure resulted from an online banking system's glitch, they say. On Friday the sheriff's department makes its second attempt this week to evict the family.
Peter Leeman