By TRAVIS LOLLER, The Associated Press

The protesters went to federal court seeking a temporary restraining order against Gov. Bill Haslam, arguing the curfew and arrests of dozens of supporters violated their rights to free speech and freedom of assembly.

State Attorney General's Office Senior Counsel Bill Marett announced at the beginning of a hearing before Judge Aleta Trauger that the state would not fight efforts to halt the policy.

The judge said she had already decided to grant the restraining order because the curfew was a "clear prior restraint on free speech rights."

Both times a Nashville magistrate refused to jail the protesters, saying the state didn't have probable cause to arrest them. They were released with citations.

The Nashville protesters are part of the six-week-old Occupy movement, which began in lower Manhattan to decry corporate influence in government and wealth inequality. It has spread to cities large and small across the country and around the world.

"This is a huge victory for us because Gov. Haslam has realized the mistake that he made," Occupy Nashville protester Steve Reiter said. "The mass arrests were totally unnecessary."

Reiter said protesters planned to remain in the plaza "for quite a while."

Marett said his office would meet with the plaintiffs to come to an agreement on health and safety issues. He said the state earlier on Monday returned the property it had seized during the arrests to its owners.

The suit says Haslam approved the new curfew after complaints over three misdemeanor violations around Legislative Plaza: "an assault, public urination and an apparent tryst beneath a magnolia tree."

Shortly before the hearing, Tennessee Republican Party Chairman Chris Devaney issued a statement calling it "astonishing" that some Democrats had shown support for Occupy Nashville. While he does not mention specific legislators, Democratic Rep. Mike Stewart of Nashville on Saturday called on the governor to rescind the curfew.

Devaney's statement reads, "Legislative Plaza is the property of all Tennesseans, not just a small group of loiterers who would've served their cause better by simply occupying a restroom, instead of showing utter disregard for public property."

The two sides have until Nov. 21 to reach an agreement or go back to court for a hearing on a preliminary injunction. 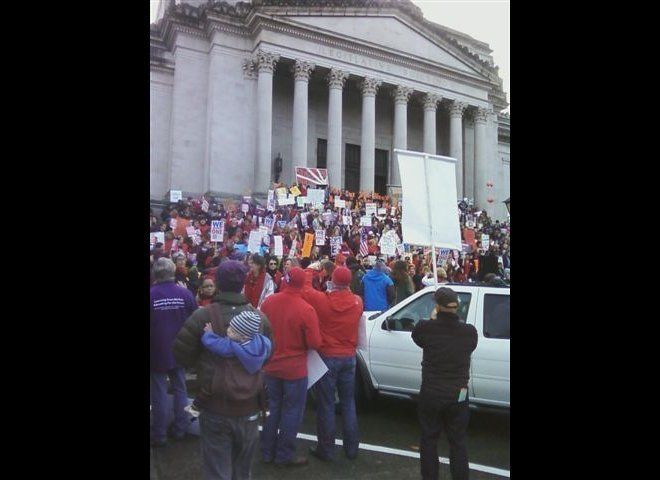