Perhaps the most anticipated float of the 2012 Rose Parade is an unofficial entrant: a giant "Occupy Octopus" made out of plastic bags. Occupy The Rose Parade protesters plan to march the 70-by-40-foot "float," along with a giant blown-up version of the United States Constitution, at the end of the Rose Parade.

Occupy's "People's Parade" will be marching against corporate personhood and the foreclosure crisis, according to the organizers' site, as well as protesting the influence of corporate money in politics.

Hundreds of protesters gathered at Singer Park in Pasadena hours before the Rose Parade to practice holding their floats and making more hand-held signs. By 8 a.m. PST, there were about 400 people, making signs and munching on snacks before the march.

Rose Parade bystanders gave a mixed response to the marchers as they made their way to the starting line of the parade. One man, who declined to give his name, told the Huffington Post, "I agree with some Occupy beliefs, but do not think this is the right place to do it." Others with him also agreed that the Rose Parade wasn't the appropriate venue for a protest.

Zia Back, one of the protesters, told the Huffington Post that she had seen pleas on the Occupy the Rose Parade forum to halt their demonstration. "It said, 'Please don't come because I'm bringing my kids to the parade,'" said Back. "But Occupy the Rose Parade sets a good example and is about the future of our youth," she insisted.

Another activist, Pablo Lopez, who is a student at Cal Poly Pomona, recalled similar objections leading up to the protest. "People on TV were saying that even though their hearts used to be with Occupy, they aren't anymore because of Occupy the Rose Parade," Lopez said. Wearing a collared shirt and tie, Lopez hopes that his friendly face and demeanor will work against hostility toward the Occupy movement.

Activist Fernando Garces, who was there at 6 a.m., told the Los Angeles Times that the group was looking into occupying events like the Grammys in the future.

Occupy The Rose Parade is led by Peter Thottam, a controversial figure in the Occupy movement. While he had initially hoped to be joined by thousands of protesters, he's since tempered expectations and now thinks 1,000 will be there. Thottam admitted to the San Gabriel Valley Tribune that "Occupy The Rose Parade" did not get formal approval from the Occupy Los Angeles general assembly, which could explain low turnout numbers. Occupy Pasadena demonstrators also declined to formally endorse the march as well.

Occupy The Rose Parade's organizers endorse a completely peaceful, non-violent protest. To make sure things go smoothly, activists have engaged with the Pasadena police in hours of meetings, and dozens of "peacekeepers" in bright green vests will keep the peace during the march.

Occupy The Rose Parade stepped off at 9:30 a.m., and while television broadcasters didn't stick around for their march, the whole thing was streamed live on UStream. Protesters were led by 30 police cars, and at every block of the parade route, about one dozen cops were standing on the corner.

While some parade viewers started leaving the bleachers for their cars, most of the stands remained full throughout the People's Parade. Viewers supplied the marchers with a healthy mix of both cheers and jeers.

Raul Plata, a parade-goer from Washington, D.C., told the Huffington Post that he was impressed with the Occupy the Rose Parade marchers. "To me, it was a surprise that they were so clever to take advantage of a free opportunity to show off their case, which is change in the world," said Plata. "I think the very long Constitution was a very unique and impressive. Maybe they'll keep on taking advantage of world-wide promoted events."

Bystander Logan Chandler, who came to Pasadena from San Diego to watch the parade and the game, was less enthused. He told The Huffington Post, "I get it. Money runs everything, but I think the protest is pointless. You need to vote and push legislation to really make change."

But protester Josephine Clare, a 78-year-old poet and translator from New York, had a different view of the morning's events. "I thought it was very successful," said Clare. "It's very important that there be a reaction to the abysmal, abysmal economic and political state of things."

At about 10:20 a.m., the final Occupy the Rose Parade protesters were crossing the finish line and continued marching through Old Town Pasadena. They were flanked by a handful of religious protesters railing against sin, alcohol and drugs and calling all to turn to Jesus Christ. Clare, a Catholic, exchanged words with the "Jesus protesters," saying that "Jesus would have been protesting with us. He was a demonstrator!" 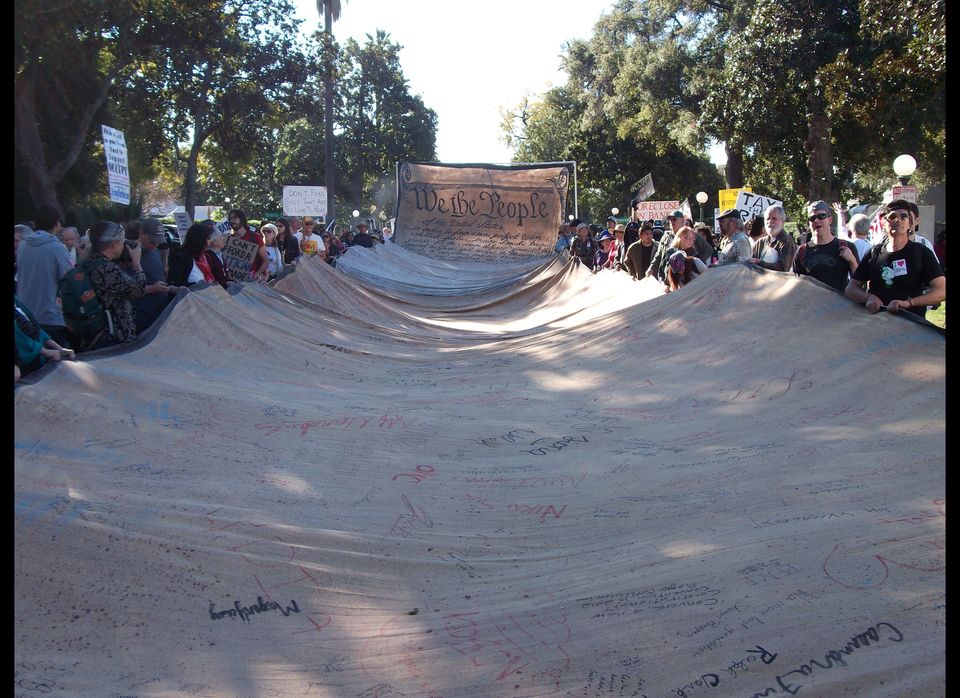