Occupy the SEC has some questions for Jamie Dimon.

Dimon, the CEO of JPMorgan Chase, the bank that lost $2 billion and counting last month due to a bad trade, is testifying in front of the Senate Banking Committee Wednesday to explain the huge loss. Dimon is expected to describe the loss as nothing more than an “isolated event,” according to his prepared remarks. In the wake of the loss though, regulators and critics have said it raises questions about the huge bank's ability to manage itself -- and whether regulators are adequately monitoring JPMorgan and other large banks like it.

Among those critics is Occupy the SEC, a group affiliated with the Occupy movement that aims to strengthen financial regulation. The organization compiled a seven-page letter in advance of Dimon's testimony with the purpose airing their complaints about Dimon and the JPMorgan loss, as well as providing lawmakers with a list of questions to ask the banking chief.

"This embarrassing episode for JPM highlights the extent to which major banks will engage in risky proprietary trading and try to disguise it as risk management," Occupy the SEC wrote in a letter to the Senate Banking Committee before Dimon’s prepared remarks were released (h/t Naked Capitalism).

Occupy the SEC sees one way to prevent another JPMorgan-style loss: Strengthening the Volcker Rule. The provision, which is part of the Dodd-Frank Financial Reform Act, aims to curb banks’ ability to make risky trades with their own money. After the announcement of the loss by Dimon, himself a strong critic of the rule, some said it could have been prevented by the measure he so staunchly opposed.

Many of Occupy the SEC’s questions are focused on JPMorgan’s Chief Investment Office. That's largely because the unit, which was responsible for the huge loss, was subjected to less stringent risk controls than the rest of the bank, according to Reuters.

“Unfortunately, the Volcker Rule’s current form, as proposed by banking regulators, contains many loopholes that would permit egregious speculation like that undertaken by JP Morgan’s CIO office,” Occupy the SEC wrote in its letter. The group has been advocating for a stronger Volcker Rule for some time, marching outside the Federal Reserve Bank of New York in February.

For its part, Wall Street doesn’t seem to be too concerned about JPMorgan’s screw up. About a dozen financial industry insiders told Bloomberg that that loss was just, well, kind of par for the course.

Here are the questions Occupy the SEC would like to ask Dimon during his testimony:

You can also read Occupy the SEC's full letter below:
Occupy the SEC/Alternative Banking Letter to Senate on JP Morgan 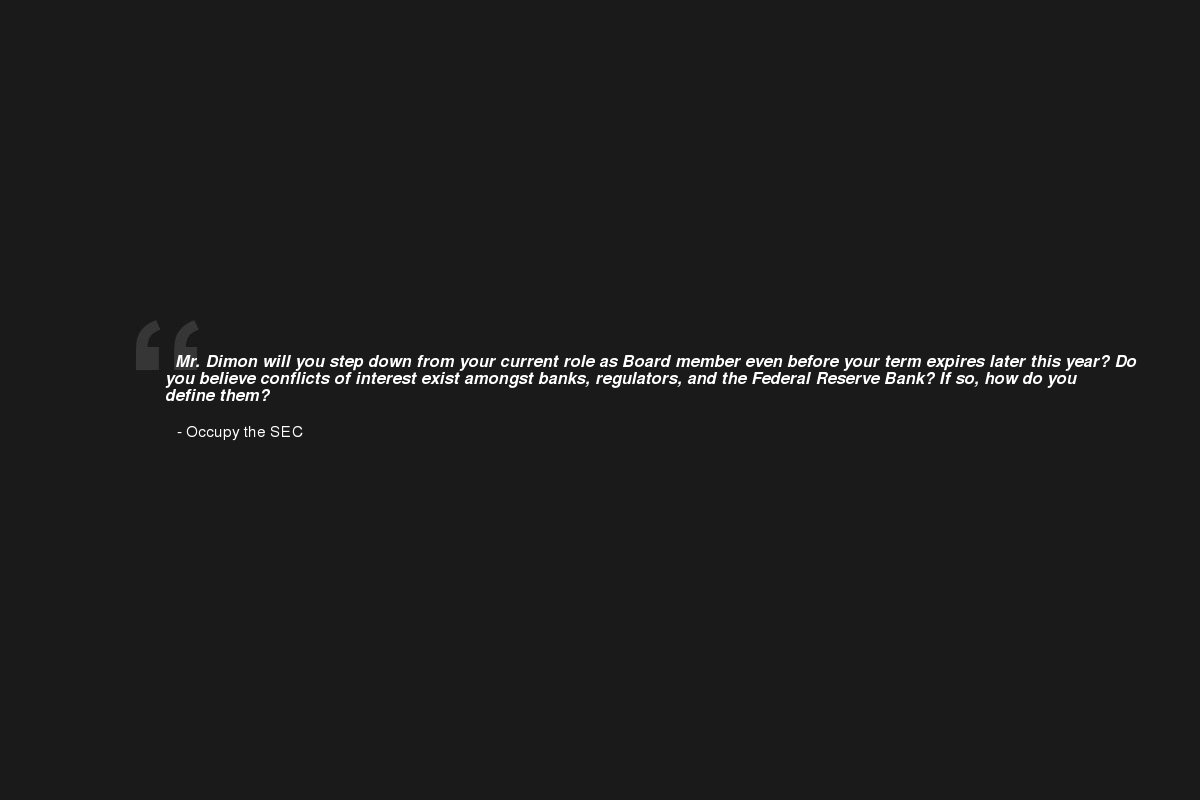