At first blush, the Tea Party and Occupy Wall Street appear as bookends: opposing grass-roots movements on the political right and left, respectively. At second blush, the Tea Party seems the more successful. In the 2010 mid-term elections, one-third of Tea Party-backed candidates won, reclaiming the House for Republicans. And an unknown Tea Party libertarian just defeated House Majority Leader Eric Cantor in Virginia's GOP primary. Occupy's one obvious success is searing the 99 percent meme into the national consciousness. But a look under the hood of each is instructive. 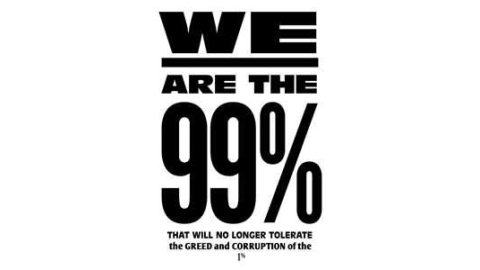 Rank-and-file Tea Partiers are mostly white, Christian, older, and fearful. The faces of Occupiers, during the movement's heyday at least, were rainbow colored: diverse in age, religion, and economic status, and mostly hopeful. Indeed, Occupy arose from Arab Spring protests -- against economic and social injustice -- that ignited in 2010 in Tunisia and spread like wildfire to Egypt's Tahrir Square, Spain's Indignados, and New York's Zuccotti Park. Because the forces of oppression are so adept, these hopes have been temporarily crushed, here and abroad. But hope springs eternal.

The public faces of the Tea Party and Occupy are familiar. For the former: Sarah Palin, Rand Paul, Michele Bachman, and Ted Cruz, among many. No prominent politicians or pundits, to my knowledge, identify openly as Occupiers. However, in word and deed those who align closely with Occupy's values include Senators Elizabeth Warren and Bernie Sanders and UC Berkeley public-policy professor Robert Reich, whose documentary Inequality for All rocked the 2013 Sundance Film Festival. All three in the latter camp are tireless advocates for a vibrant middle class.

Interestingly, the movements share some common gripes: a sense of betrayal at the government's bailout of big banks following the 2008 financial meltdown and wariness that the constitutional rights of ordinary citizens are eroding. Equally suspicious of Big Brother, the groups hold sacred differing amendments of the Constitution. Occupiers, subjected to heavy-handed police suppression and forcible evictions, keenly regard the rights of lawful assembly and free speech, including Internet freedom. For Tea Partiers, Second Amendment rights may trump those of the First. According to TruthOut, in a recent Tea Party convention address, Faith and Freedom Coalition's Ralph Reed warned that, should government fail its constitutional role to protect life, liberty, and the pursuit of happiness, "there is moral obligation to overthrow the government, by force if necessary." Whereas Occupy has been expressly non-violent from the get-go, the hint of violence lurks just beneath the surface of the Tea Party. "Don't retreat; reload," Sarah Palin is fond of saying.

What Do They Want?

What the movements want mirrors what they most fear. Tea Partiers take to heart Ronald Reagan's maxim: "Government is not the solution to our problem; government is the problem." Tea Partiers cut their teeth by noisily opposing national health care. They fear the intrusion of government into all aspects of American life. Although there is no official Tea Party agenda, by and large Partiers are ultra-libertarians who demand small, decentralized government; a balanced federal budget; minimal taxes; and across-the-board federal deregulation -- environmental, industrial, and financial. Their ultimate aim might best be summed in the mantra of Grover Norquist: to shrink government "until we can drown it in the bathtub." Unfortunately, Partiers remain oblivious to the role deregulation played in the 2008 financial crisis and are willfully ignorant of a foundational economic principle: that public and private sector spending are complementary. The time to balance the budget is when the private sector is strong, not when the economy lies in shambles. Consequently, when the Tea Party gets its way, things only get worse.

In contrast, Occupiers most fear the excesses of Wall Street, corporate America, and multinational corporations: the kinds of excesses that culminated in the economic crash of 2008 and have since produced the greatest income inequality since the Great Depression. Occupiers see government as the only entity with sufficient power to hold too-big-too-fail banks and corporate greed in check. To most Occupiers, Citizens United is an egregious affront to constitutional rights. By granting "personhood" to corporations, further empowering the powerful, the Supreme Court gutted the Constitution and effectively silenced the voices of ordinary citizens. What do Occupiers want? An economy that works for all, not just elites. A government that fulfills its inviolate constitutional obligation to protect the less powerful from exploitation by the more powerful. And government with enough oversight and restraint to avoid the ever-present temptations to wage perpetual war and spy wholesale on its own citizenry.

Perhaps the most fundamental difference between the Tea Party and Occupy is that only one is truly a grassroots movement. A wise friend quips: "The Tea Party isn't grassroots; it's Astroturf." The Tea Party receives substantial support from front organizations like Americans for Prosperity, one of many funded by the billionaire Koch brothers to insinuate their extreme libertarian agenda into all corners of our lives.

Although the Tea Party may seem more successful than Occupy, I'd argue the converse. "Do no harm" is the first premise of the ethical healer. Every Tea Party "success" has damaged the nation. By choosing as its spokespersons flame-throwers like Michele Bachman and Sarah Palin, who have scant regard for truth, the Tea Party has stifled dialogue critical to addressing real problems. By electing demagogues like Ted Cruz, whose scorched-earth antics disgust the saner members of his own party, the Tea Party has thrown sand in the gears of democracy, grinding Congress to a legislative halt. By its naïve insistence on budgetary austerity and "no new taxes"-- not even for millionaires -- the Tea Party has hamstrung economic recovery and perpetuated historic levels of economic disparity. Worse, by carrying water for oligarchs like the Koch's, the Tea Party has weakened governance "of, by, and for the people," undermining the very Constitution it purports to cherish.

On the other hand, largely out of sight, Occupy has done the heavy intellectual lifting necessary to genuinely address the nation's vexing problems. As an Occupier, I found it gratifying to read Robert Rubin's Washington Post op-ed of July 27: "How ignoring climate change could sink the U.S. economy." Rubin, former treasury secretary, now echoes several economic fixes proposed in an Occupy white paper of 2012, among them that the nation's economic health and environmental health cannot be separated. Here's Rubin's punchline:

The Tea Party fell from public favor following the debt-limit debacle of 2013, and Occupy has gone underground. It would be a mistake, however, to regard either down for the count. The sense of betrayal -- of having been sold out to special interests -- remains raw in both camps. The systemic problems that created the meltdown of 2008 remain unaddressed. And in the six years hence, the middle class has shrunk significantly, the lower class has grown dramatically, and the wealthiest 1 percent has run off with 95 percent of income growth.

If America is to pull out of its tailspin before there's revolution, it may require the cooperation of Tea Partiers and Occupiers. Given the differences in style and substance, this seems unlikely -- unless vast numbers of Partiers awaken to the reality they've been duped. Still, such improbable synergy is the gist of Ralph Nader's new book Unstoppable: The Emerging Left-Right Alliance to Dismantle the Corporate State. I've not read it, but Nader could be right. On April 26, Cowboys and Indians (i.e., ranchers and Native Americans) convened on the National Mall to oppose the Keystone XL pipeline in a stunning display of conservative-liberal unity. And in Atlanta, Tea Partiers and Sierra Clubbers have aligned to form the Green Tea Coalition, advocating together for solar energy.

Divided we fall; united we stand.

(The author is grateful to Michael Szul for information regarding the Green Tea Coalition and to Andy Schmookler for editorial suggestions.)