Two weeks ago, Cornel West, Princeton professor and activist, showed up at a tent city erected by Occupy Wall Street protesters across the street from the Federal Reserve building in Boston. As he finished delivering an impromptu speech, a man who had been standing off to the side leaned in and gave him a hug. He was in his mid-thirties, with gray-dusted hair, a round face and dimples. Most people who witnessed this moment probably didn't think anything of it -- but then, most people aren't familiar with the faces of the online movement known Anonymous.

The man was Gregg Housh, an Internet technology consultant and one of the few people associated with Anonymous whose real name is known to the public. Housh occupies a special place in Anonymous lore. In 2008, he was among a small group of "Anons" who came up with the idea of releasing a video that declared war on the Church of Scientology, which in turn led to thousands of people protesting outside of Scientology centers around the world and heralded the moment when Anonymous first coalesced into something resembling a political movement.

Back then, Housh couldn't have been less interested in political or social change. Scientologists had provoked Anons by removing an embarrassing and, to the Anons, hilarious video of Tom Cruise from the Internet, and the Anons thought it would be funny to get back at them by standing around outside their centers wearing masks and shouting insults.

As for Housh himself, he had hardly lived the life of a typical activist. When in his twenties, he was arrested for helping to run a software piracy group, and spent three months in a maximum-security prison. This was just one episode in what he described as a long history of criminal mischief.

Within about two weeks of the first protesters descending on Wall Street, however, he was spending nearly every day at the Occupy Boston site, where he quickly fell into a central logistical and public relations role, talking to reporters, city officials and unions -- and, indeed, rubbing shoulders with none other than Cornel West, that prominent and cufflinked icon of progressivism.

"I've gone from not caring about anything at all but myself to pretty much a full-time activist," he said on the phone recently, sounding a bit surprised. "And I'm pretty happy with the transformation. It feels good to care about the world."

Housh is one of many participants in the Occupy Wall Street protests who trace their roots in the movement to the constellation of online networks and chat rooms that make up the Anonymous universe. A few days ago, I gave myself an online alias ("sakiknafo"), logged into one of the main Anonymous online networks (AnonOps) and entered a chat room labeled "#occupywallstreet," where I introduced myself as a reporter to someone with the handle "Velveeta."

Velveeta identified himself as a man, and an "@" symbol next to his handle indicated that he was a channel operator. This meant that the creators of the channel had given him access to a set of special commands, which in effect granted him the ability to kick people out of the room when they got unruly, or to reward them with a promotion in the channel hierarchy when they contributed something interesting or useful to the conversation.

Velveeta said that he was "50ish," worked in the transportation industry and lived off the grid in a classic Airstream trailer in the Southwest. He described himself as an "accidental activist," adding what seemed to be a self-deprecating "lol."

Asked whether he'd been personally affected by the decline in the country's fortunes, he wrote, "Yes, I have, but not as badly as most."

He got involved with Anonymous in 2010, after members bombarded the servers of several companies with millions and millions of random requests and succeeded in briefly taking down the corporate websites of MasterCard and Visa in retaliation for their decision to cut off funds from WikiLeaks. After the magazine Adbusters put out a call this summer for people to "occupy Wall Street," and especially in the first few days of protest, he and the other Anons on the channel worked frenetically to spread the word, constantly reminding everyone in the Anonymous chat rooms to "tweet and retweet."

Of the first day of the demonstrations, as it turns out, there were actually two protests in New York: While Zuccotti Park was filling with people chanting about the injustice of bailouts, about a dozen Anons stood behind a police barricade across the street from the Scientology center in Times Square, relentlessly mocking everyone who walked out of the building. They have been meeting there to do this at least once a month for the past four years.

In some sense, those two protests were manifestations of the two camps within Anonymous: there are Anons who are attracted to the movement for moral reasons and those who are in it mainly for the laughs, or "lulz." They are known as moralfags and lulzfags, respectively. (Calling someone a "fag" in the context of Anonymous culture is essentially like calling them "dude".)

The Wall Street set apparently fell into the former category. As for the Anons in Times Square, when asked about Occupy Wall Street that day, they laughed.

They saw the protesters as annoying, deluded hippies and challenged their claim to the mantle of Anonymous. To be a real Anon, they suggested, you have to be versed in the dark humor of online channels and forums like the /b/ board of the website 4chan.org, where Anonymous originated and where every other post seems to have been selected for its ability to shock and offend. (Gore and pornography figure prominently.)

The original Anons were more prankster than activist, but over the last year or so, the scales have tilted in the other direction. The first major sign that changes were afoot came in 2009, when Anons used their technical skills to set up a secure website for protesters in Iran. As the movement's aims shifted to more significant targets, it received more and more attention from the media and suddenly people who didn't know the difference between a "loli" and a "lolcat" were finding their way to the forums where Anonymous members planned attacks. (A “loli” is an underage girl, the “lolcat” is a picture of a cat with a humorously misspelled caption.) The ranks of Anonymous had expanded to include people who saw the Internet less as a means of mocking people or disseminating funny pictures and more as an instrument of revolution.

When asked about this divide, Velveeta said he thought the two camps overlapped. "You still see a lot of '4chan-isms' here," he explained. "4chan runs deep in the people who love it. Even if they take up the Anon mantle, they still like 4chan and all it stands for. Personally, I never had the patience for it."

He then suggested speaking with someone called Billionaire.

Billionaire, when he appeared in the chat room, said he got involved with Anonymous in early 2009, when he noticed that "the funniest things on the Internet tended to have the name 'Anonymous' attached to them." He started following the movement on 4chan, attempting to avoid "the more disgusting posts."

Even then, he said, there were indications that Anonymous could be a force for social and political change. He mentioned lolcats, those pictures of cats with captions like "I can haz cheezburger." Motivated by an appetite for laughs, or “lulz,” Anons helped turn the lolcat into a viral sensation. What if this meme machine used its powers for something more serious? "I saw its potential for stretching far beyond memes and lolcats," he said.

In the months leading up to the attacks on MasterCard and PayPal, he watched Anonymous "turn away from random raids on people's lives, and away from their reputation as an 'Internet hate machine' and towards more 'Moral' goals."

"This is before the politics came in," he wrote. "This was just hunting down people that, say, posted a video of [themselves] abusing a dog or cat, and ruining their lives."

Then came the WikiLeaks operation, and a year later, attacks on the websites of the authoritarian governments in Tunisia and Egypt and Libya, and finally, the call to occupy Wall Street. Billionaire noted that in the early days of the demonstrations, the established media paid scant attention to the protesters. By contrast, Anonymous ensured that news of the scene in Zuccotti Park went viral.

He claimed that Anons had been studying "the astroturfing that is being done in the name of conservative politics,” referring to allegations of conservative political groups attempting to pass off events they organize as evidence of a grassroots movement. Anonymous had used similar tactics to promote Occupy Wall Street, he suggested. "We had teams of people seeding links all over the news comments, YouTube, FB, etc, and making lists of interested FB groups, etc., and then telling them all to come.”

In essence, Billionaire was saying that Anonymous had done for Occupy Wall Street what they previously did for funny pictures of cats. They had used their expertise in spreading memes to help turn the actions of a few protesters into a national movement. "I am always interested in giving a meme a chance," said Billionaire. "This one far outperformed our expectations." 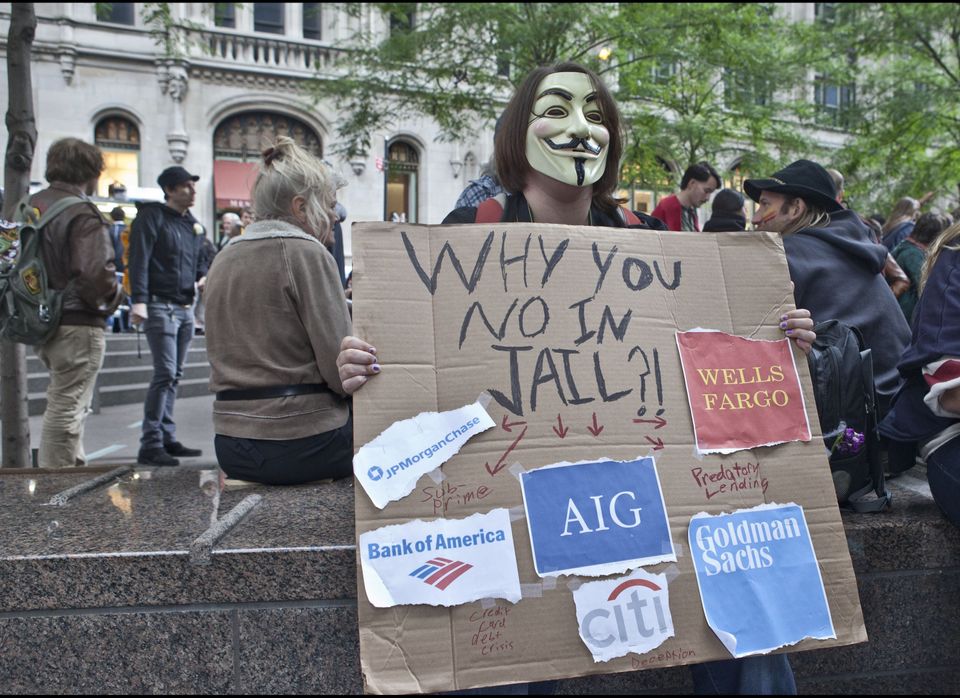