Jordan McCarthy, 22, has been living in Zuccotti Park since the beginning of Occupy Wall Street. And because Jordan's been living there, so has Calvin, her dog.

Calvin is one of many dogs who have been enlisted into the Occupy movement, including a fair few who've been drafted into the job of sign carrier.

Calvin's job is mainly to look cute. Before McCarthy came to Zuccotti Park, she spent two years hitchhiking around the country, and she says that Calvin's cuteness saved her from some long and wet days by the side of the road. "People have told me, 'I would have left you on the side of the road in the rain, but I didn't want to leave your dog there,'" she said. "It's actually really easier traveling with a dog."

Since coming to Zuccotti Park, McCarthy said, she and Calvin haven't gotten to spend as much time together as before. "I'm really busy with [the sanitation committee], but everyone here loves him," she said. "A few of my friends who I came with will watch him when I'm busy, which is great, and anyway, he's really independent. Most of the time, I can leave him in sanitation and he'll just stay curled up in a blanket."

Helena Oger, the canine companion of a protester who goes by the name Cowboy Oger, required a little more care and attention. "She's pampered," said Cowboy. "And the protest was really tiring for her. She was falling asleep with her head up." Cowboy stayed at the park for five days recently. He said he often looked forward to taking Helena on walks outside the park. "It was good to get away from the noise and commotion," he said.

Cowboy, 39, says he served in the military in the late '80s and early '90s and saw combat in Panama and the Gulf. He has been diagnosed with post-traumatic stress disorder and now gets by on social security checks. He lives in Woodstock, N.Y. -- "below the poverty line," he reported. Helena is his best friend, he said, but sometimes it's hard to come up with the money to feed her well. He considers her part of the 99 percent. "Even dogs can feel the pinch of these times," he said.

CORRECTION: A previous version of this article misstated Jordan McCarthy's age as 42. She is 22.

New York We Are The 47 Percent Puppies Zuccotti Park Dogs 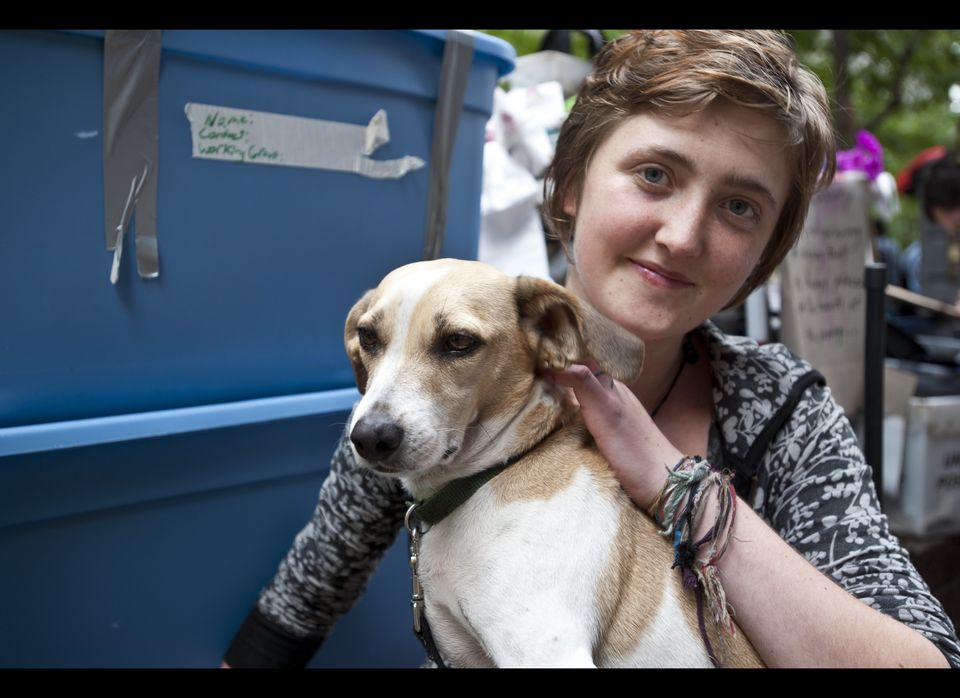