"New York is the concentrate of art and commerce and sport and religion and entertainment and finance, bringing to a single compact arena the gladiator, the evangelist, the promoter, the actor, the trader and the merchant" - E.B. White

"Occupy Wall Street" is the command of a loosely knit congregation of primarily young people who have set up a small colony in downtown since the 17th and, despite the armature of a police state surrounding them, these Millenials are questioning the economic structure of this millenium. Using D.I.Y. signage, social media savvy and a fair amount of street theater, their message has been making its way beyond the cavernous streets of the best known banking district in the country. 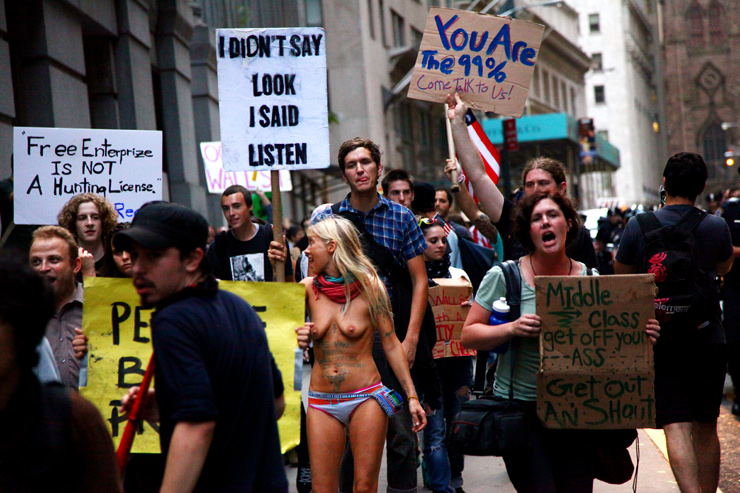 Fortified with a heavy contingency of uniformed and plainclothes officers with cameras and weapons at the ready, Wall Street became an iron clad citadel 10 years ago, an impenetrable marble and concrete castle to capital where tourists waddle and traders race daily past the steps on which George Washington took his oath of office. The stock market is here, the Federal Reserve, and so are all the banks.

It's understandable that a generation with bad prospects of finding work, saddled with high debt for their education and living with parents who are at their wits' end because of underwater mortgages, loss of health insurance and disappearing retirements would now fix their gaze upon the root causes of this permanent insecurity. In many people's minds the class warfare has been in full effect for a while and these folks are now wondering about those basic tenets of free speech and right to assemble that Americans of previous generations fought to maintain, guaranteed by the constitution. As corporations continue to gain rights and citizens continue to cede them, these demonstrators say they feel like they have nothing to lose, except their entire country.

Read more after the slideshow.

Their camp is a nerve center of hi/low tech creativity where handmade signs on cardboard are painted with sharp slogans and laptops and handhelds are regularly updated with hashtags and twitpics. In the center of the camp a makeshift digital press office is ringed with faces glowing in the cool blue hue as communication with the rest of the world is continued under the watchful gaze of a ring of blue officers and street cameras. There is also joyful music performed live, with folks sharing food, books, blankets and stories.

Here are some images from the streets of Wall this week - with tourists alternately perturbed and pleased, police polite and alert, and demonstrators all over the place with messages and chants forced into a cyclical narrow path in the public space by temporary steel structures. 2011 has brought an Arab Spring where people have taken back the discourse from ever more entrenched power holders, and this spontaneous discontent appears to be encircling the globe as the shiny finish on corporate globalism seems to lose it's luster. It makes perfect sense that these demonstrators are in this symbolic and actual nerve center of capitalism in such a public way, using public space to debate public issues. 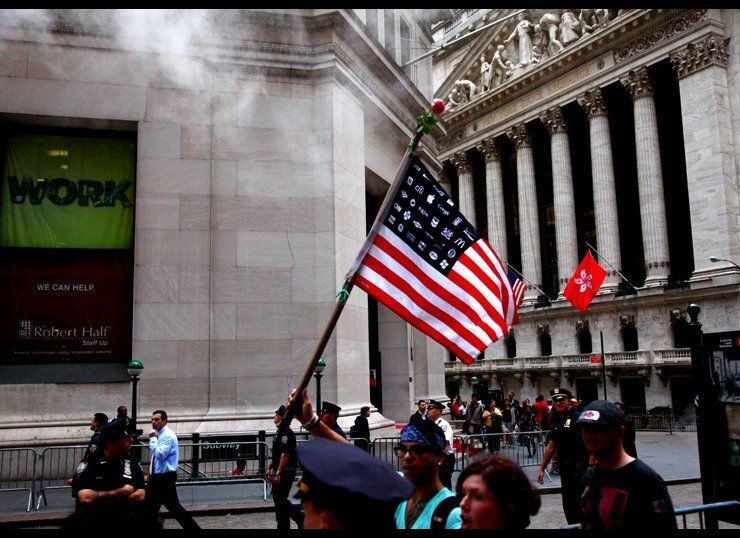