The Occupy Wall Street (OWS) movement has changed our national conversation. At kitchen tables, in coffee shops, in offices and factories, and in newsrooms, Americans are now talking about economic inequality, corporate greed, and how America's super-rich have damaged our economy and our democracy.

The wide gulf between the richest one percent and the rest of Americans hasn't changed over the past year, but in the past month OWS has made it the dominant topic of discussion across the nation. Even the GOP presidential candidates, while first criticizing the occupiers as a radical fringe, have had to do an about-face when they saw that the protesters had, in fact, captured the national mood.

One can see how Occupy Wall Street has transformed the country's agenda by examining how America's newspapers have covered the movement's concerns and issues.

For example, a search of Lexis/Nexis's database reveals that in October 2010, U.S. newspapers published 409 stories with the word "inequality". As the graphs reveal, each month through September 2011 the number of stories varied little. But in October 2011, the frequency skyrocketed to 1,269 stories.

Number of articles with the word 'inequality' in U.S. newspapers - October 2010 through October 2011 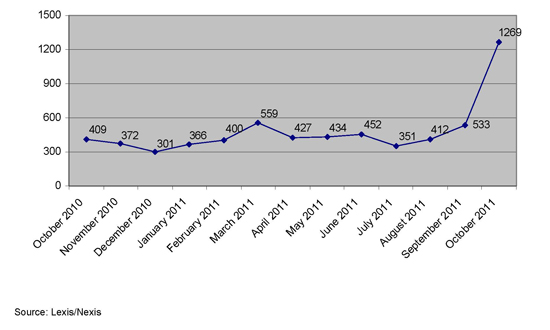 Likewise with the word "greed." Between October 2010 and September 2011, the number of "greed" stories fluctuated between 452 and 728. But within weeks after Occupy Wall Street gained a foothold in New York and cities around the country, the papers were filled with stories about greed. Last month, newspapers ran 2285 stories with the word "greed."

Number of articles with the word 'greed' in U.S. newspapers - October 2010 through October 2011 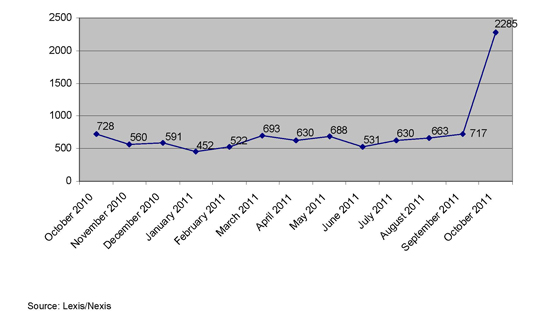 The focus on greed tends to target corporate American and the super-rich, where wealth and power are concentrated. Here, too, the media has changed its reporting in response to the escalating protests that began in New York. For most of the past year, stories about the "richest one percent" -- the target of Occupy Wall Street's anger and the flip side of the 99% that the protesters claim to represent -- were few and far between. In fact, as the graph shows, between October 2010 and September 2011, that phrase appeared in the nation's newspapers between 11 and 32 times each month. In October 2011, by contrast, they published 174 stories that mentioned the "richest one percent."

Number of articles with the phrase 'richest one percent' in U.S. newspapers - October 2010 through October 2011 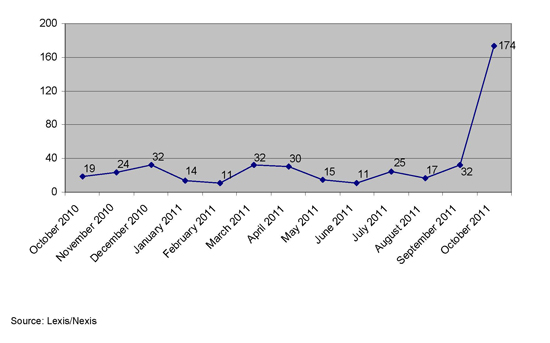 Of course, not every story with the words "inequality," "greed" and "richest one percent" was about the issues that Occupy Wall Street is raising. But the pattern is clear. The protest movement that burst onto the scene has shaken up our daily discourse and our political system. The protest over these issues has reached such a crescendo that even Republican Congressman Eric Cantor, the House majority leader, scheduled a speech at the University of Pennsylvania's business school last week to address the topic of inequality. (He cancelled the speech when he learned that he couldn't restrict who could attend the talk and that Occupy Philadelphia would be protesting outside the event).

Whether Occupy Wall Street and its supporters can translate growing public awareness and concern about inequality and greed into issues in the 2012 presidential and Congressional election remains to be seen. But, at least now, it's possible.


Peter Dreier teaches politics at Occidental College. His next book, The 100 Greatest Americans of the 20th Century: A Social Justice Hall of Fame, will be published by Nation Books next year.