By JAKE COYLE, The Associated Press

Whatever degree of success achieved by the Occupy protests, it's largely been based on its old-fashioned, off-line demonstrations. They've been decidedly beyond virtual, staking out real ground in downtown Manhattan's Zuccotti Park and forging signs-and-sit-in protests around the country. Some of its founding members even disdain online interaction.

But the protests – the country's first large-scale demonstrations led largely by a generation raised on the Internet – were originally conceived of as "the Occupy Wall Street meme" and made its name by its website: OccupyWallStreet.org.

The protests went viral, but they've also spawned all kinds of more playful Internet memes that highlight the dual nature of the Web to an American protest movement. Though the Internet is an essential tool for amplifying a message, it inevitably leads toward frivolity and parody.

Whereas much was made of how social media aided the uprising in Egypt, the same tools have commonly been used for jokes when it comes to the Occupy Wall Street protests.

Earlier this week, the University of California, Davis, police officer who casually swept a line of campus protesters with pepper spray became a viral sensation. The officer, whose name is Lt. John Pike but who's known simply as "Pepper Spraying Cop" online, was captured on video dousing the faces of sitting protesters. The footage is remarkable for his seemingly cavalier disposition.

The meme positions the officer pepper-spraying famous figures through history, movies, famous paintings and just about anything else. George Washington crossing the Potomac gets it, and so does Jesus at the Last Supper. Even the hobbits of "Lord of the Rings" get sprayed. 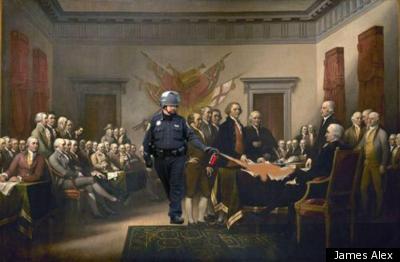 The essential point of the manipulated images is to highlight the absurd nature of the spraying, an apparently callous authority meting out punishment. This kind of meme – unlike the viral protests themselves – runs counter to the movement's seriousness. It's amusing satire, but instead of shouts of injustice, the meme gleefully separates from reality.

Meanwhile, UC Davis students are doing more than snickering at Internet photos. They've gathered to condemn the violence and urged university officials to require police to attend sensitivity training. Pike, another officer and the campus police chief have been placed on paid administrative leave.

There have been other goofy online reverberations, too. On Amazon.com, ironic reviews of pepper spray have been written. Five stars, reads one: "Accept no substitutes when casually repressing students." The comedy website FunnyOrDie.com gathered the reviews together.

An earlier video of a marriage proposal at Zuccotti Park has been seen by more than 108,000 on YouTube. The clip is titled "Occupy My Life."

The name of the Occupy movement has led to countless parodies, everything from football watchers saying they're spending a Sunday with "Occupy Couch" to a collection of protesting pets: "Awwccupy Wall Street."

One image of a cat bears a note: "I am the 99 purrcent." Yes, even the Occupy movement has its own LOLcats.

Other variations include Occupy Mordor (again with the "Lord of the Rings") and Occupy Sesame Street. Says the Cookie Monster: "99 percent of the world's cookies are consumed by the 1 percent of the monsters."

There's even an "Occupy the URL" site that allows any user to input a Web address and then see protesters papered over it like pop-up ads. So you can take the movement entirely to cyberspace, and occupy not just Wall Street, but MySpace, or your Netflix queue.