One by one, the Occupy Wall Street protesters trickled in to Queen Mother Dr. Delois Blakely's second-floor walk-up in Harlem. They sat cross-legged on the floor or leaned in the doorways, passing muffins and listening to Blakely, a veteran activist and former nun, who praised their youth and the virtues of the Occupy Wall Street movement.

But mostly she talked about the tragedy that had befallen her building, which decades earlier had been a haven for struggling mothers and their families. The building, home now mostly to elderly women, has been without heat and hot water off and on for years.

The building's eight tenants have little neighborly love to spare for each other. Blakely sees the problems with the boiler as part of a campaign by the tenants' board to force out current tenants in order to charge higher rents to wealthier ones who are moving into the neighborhood, which is a rapidly gentrifying part of Harlem.

As evidence she points to the broken steps that have gone unrepaired for months, the mounting code violations and the non-working boiler, among other things. According to the city's housing and preservation agency, there are currently 293 open violations at the location, including violations for not providing heat, hot water and not providing ready access to the boiler room.

Blakely claimed the landlord had refused to hand over a key to the boiler room so that maintenance workers could install a new one. That was, until a band of about a dozen Occupy Wall Street protesters last week occupied the building's basement and refused to leave until the landlord complied with Blakely's demand that the boiler be replaced.

After an all-day occupation on Halloween and the arrest of one protester, the landlord relented, allowing access to the boiler room. By late Friday evening, workers were clanging and banging away in the basement, dismantling the old clunker and clearing space for a new boiler, provided in part by an emergency order by the city, Blakely said.

Attempts to reach the landlord for comment were not successful.

"I've been fighting to keep this building for the community," Blakely said. "But I'm an old lady. I had no man-power."

So she said she went down to Zuccotti Park, home base for the Occupy Wall Street protests, and recruited activists.

"I saw all of these young children that had real skill and ability," she said. "I said to them, 'We're done with all the massaging and intellectualizing. What's next? If you really want to see what's really going on, [follow me],'" she recalled telling the protesters at a General Assembly. "It's time for action."

All hands went up and were wiggling, she said, the sign of agreement at Occupy Wall Street.

On any given day, there are between a dozen and 25 protesters on site, with about 10 core members who stay on the property around the clock, Blakely said.

"This was a situation where we could take direct action and do something right now and help real people," said one of the protesters, who gave his name only as Semi, a 25-year-old who drove up from North Carolina to join OWS.

Tony Cochran, 25, from Portland, Ore., agreed, chiming in that actions like this "make it a real issue."

As the young men talked about further actions and working on behalf of the oppressed and the 99 percent of Americans who have been victimized by the rich and greedy, Blakely looked on like a proud mother.

Blakely, a former nun with the Franciscan Handmaids of the Most Pure Heart of Mary, an order of African-American nuns based in Harlem, said that a group of young people affiliated with the New Future Foundation, a not-for-profit that she founded in the late '60s, came across the building in 1978. It was abandoned then, but with the help of volunteers from the community, they turned the place around. She said she worked out a deal with the city to purchase the building for $2,000, which would be paid by shareholders paying $250 each.

She said she canvassed the community and passed out fliers looking for tenants to purchase apartments in the building, particularly women in need. Several of the original tenants still live there today.

But the goodwill has soured over the past few decades. Many of the women whom she helped in the beginning have since turned against her, she said, pushing her aside to move forward with their own plans for the building.

From a big chair in her living room, Blakely spun a tale of backstabbing and deceit, of greed and ill will, of predatory lenders, fake lawyers and a $650,000 mortgage, which she believes was taken out illegally on the building by one of the board members, that has yet to be accounted for.

"I was the dishwasher, the garbage collector, the snow digger, the mopper, the exterminator -- I was everything when I first came here," Blakely said. "I was trying to save the world, but that's not the reality of the world that I live in," she said. "Everybody doesn't think like me. They went from women in need to women in greed." 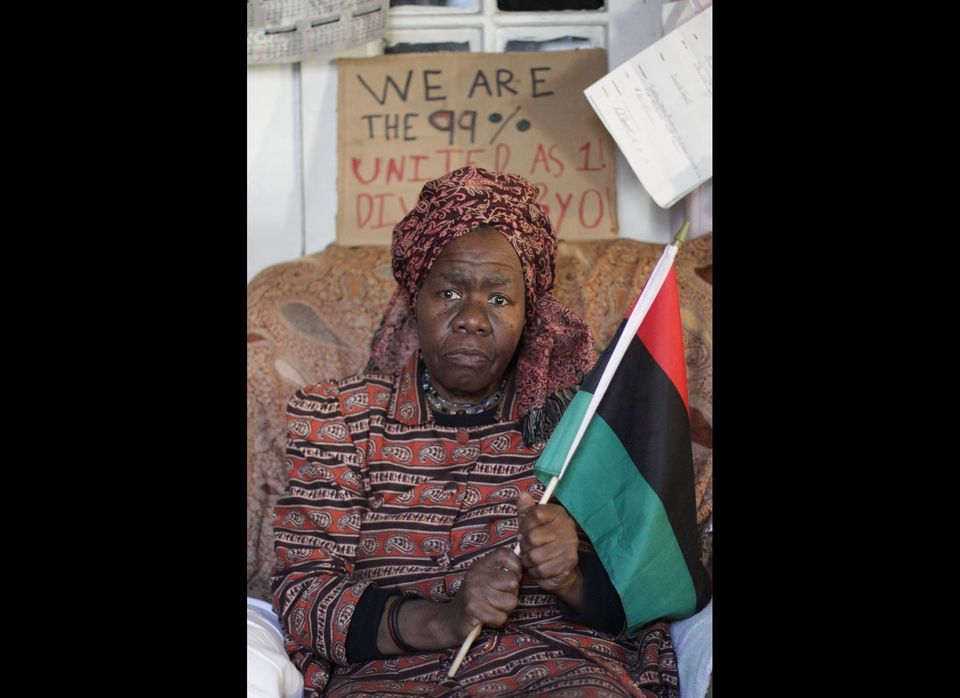 1 / 5
Queen Mother Dr. Delois Blakely at her apartment in Harlem, where Occupy Wall Street protesters occupied the building's basement until the landlord agreed to replace the boiler. The building had been without heat and hot water on and off for years.
Trymaine Lee