A speech by President Obama in New Hampshire was briefly disrupted Tuesday, when Occupy protesters attempted to upstage him with a so-called "mic check." Though they were quickly drowned out by a chorus of "Obama, Obama," one protester reached the president while he was shaking hands after his address and delivered him their complete message by hand.

Obama addressed the Occupy Wall Street movement during a broader speech pushing for the passage of elements of his jobs bill, particularly the extension of payroll tax cuts.

After the brief interruption, Obama called attention to the demonstrators and the larger Occupy movement.

"I'm going to be talking about a whole range of things today and I appreciate you guys making your point. Let me go ahead and make mine," Obama said. "I'll listen to you and you listen to me."

The president continued, painting the motivations for getting his jobs bill passed as in line with the concerns of the Occupy protesters.

"For a lot of the folks who have been in New York and all across the country in the Occupy movement, there is a profound sense of frustration about the fact that the essence of the American dream, which is if you work hard, if you stick to it that, you can make it, feels like that's slipping away," Obama said. "And that's not the way things are supposed to be. Not here. Not in America."

The text of the Occupy protesters' message:

"Mr. President: Over 4000 peaceful protesters have been arrested. While banksters continue to destroy the American economy with impunity. You must stop the assault on our 1st amendment rights. Your silence sends a message that police brutality is acceptable. Banks got bailed out. We got sold out."

Photos of the encounter below: 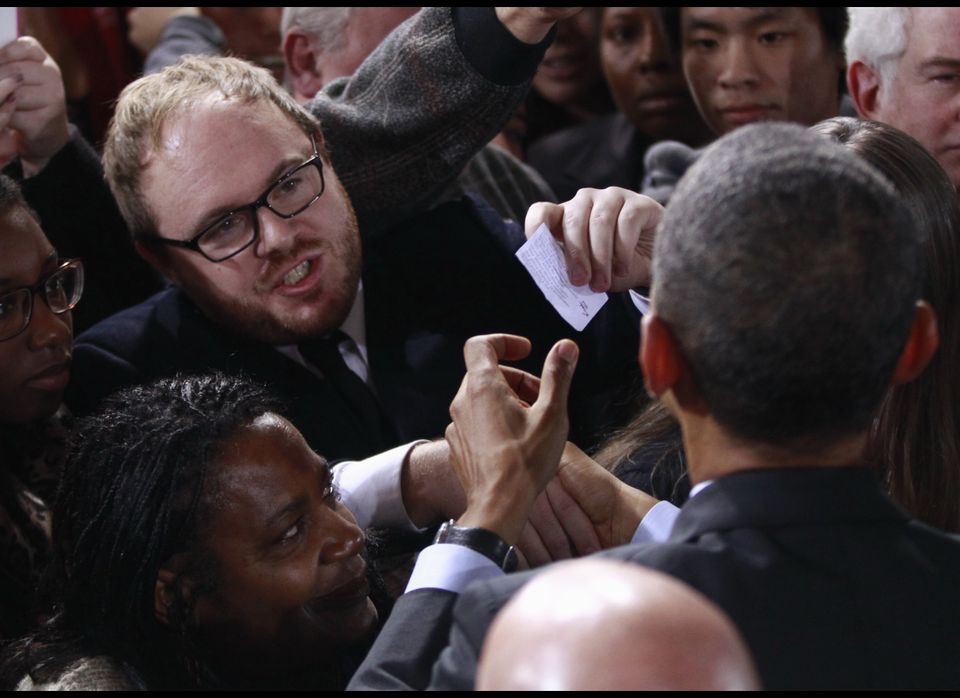