By ALESSANDRA RIZZO and MEERA SELVA, The Associated Press

Elsewhere, hundreds of thousands nicknamed "the indignant" marched without incident in cities across Europe, as the "Occupy Wall Street" protests linked up with long-running demonstrations against European governments' austerity measures.

Heavy smoke billowed in downtown Rome as a small group broke away and wreaked havoc in streets close to the Colosseum and elsewhere in the city.

Clad in black with their faces covered, protesters threw rocks, bottles and incendiary devices at banks and Rome police in riot gear. With clubs and hammers, they destroyed bank ATMs, set trash bins on fire and assaulted at least two news crews from Sky Italia.

Riot police charged the protesters repeatedly, firing water cannons and tear gas. Around 70 people were injured, according to news reports, including one man who tried to stop the protesters from throwing bottles.

TV footage showed one young woman with blood covering her face, while the ANSA news agency said a man had lost two fingers when a firecracker exploded.

In the city's St. John in Lateran square, police vans came under attack, with protesters hurling rocks and cobblestones and smashing the vehicles. Fleeing the violence, peaceful protesters stormed up the steps outside the Basilica, one of the oldest in Rome.

"People of Europe: Rise Up!" read one banner in Rome. Some activists turned against the violent group, trying to stop them and shouting "Enough!" and "Shame!"

Rome Mayor Gianni Alemanno blamed the violence on "a few thousand thugs from all over Italy, and possibly from all over Europe, who infiltrated the demonstration." Some Rome museums were forced to close down and at least one theater canceled a show.

Protesters also set fire to a building, causing the roof to collapse, reports said. The Defense Ministry denied reports it was one of its offices.

Premier Silvio Berlusconi called the violence a "worrying signal," and added that the perpetrators "must be found and punished."

Berlusconi barely survived a confidence vote Friday, with many questioning his leadership. Italy's debt burden is second only to Greece in the 17-nation eurozone and the country is rapidly becoming a focus of concern in Europe's debt crisis.

ANSA said four people from an anarchist group were arrested Saturday with helmets, anti-gas masks, clubs and hundreds of bottles in their car.

In Spain, the Indignant Movement that began around-the-clock "occupation" protest camps in May which lasted for weeks held evening marches Saturday that converged on Madrid's Puerta del Sol plaza.

"There is a huge crowd here," said Elsa Varona, whose choir sang an excerpt from Giuseppe Verdi's Nabucco overture as the marchers arrived. Organizers said 300,000 people took part, but police did not offer an estimate.

Portuguese protesters angry at their government's handling of the economic crisis pushed against police lines in Lisbon, but officers stopped them from storming parliament. Portugal is one of three European nations - along with Greece and Ireland - that has had to accept an international bailout.

In Frankfurt, continental Europe's financial hub, 5,000 people protested at the European Central Bank, with some setting up a tent camp in front of the ECB building.

The London demonstration swelled to several thousand people by early evening, and police said three were arrested. While protesters erected tents and gathered blankets, food and water to settle down for the evening, police urged them to leave, saying cathedral staff needed to prepare for Sunday services.

In Paris, marchers shook their fists and shouted as they passed the city's historic stock exchange, before congregating by the hundreds outside the ornate City Hall.

"Stand up Paris! Rise Up!" protesters shouted. "Sharing will save the world!"

The Greek capital of Athens has seen near-daily strikes and protests as the government fights to avoid bankruptcy, and Saturday was no different. Some 2,000 rallied outside parliament against a new austerity package being voted upon on Thursday, while teachers and civil servants held marches elsewhere in the city. In Thessaloniki, Greece's second city, 3,000 took part in a peaceful protest.

Several hundreds more marched in the German cities of Berlin, Cologne and Munich and the Austrian capital of Vienna, while protesters in Zurich, Switzerland's financial hub, carried banners reading "We won't bail you out yet again" and "We are the 99 percent."

That referred to the world's richest one percent, who control billions in assets while billions of others are struggling to make ends meet.

In Brussels, thousands of marched through the downtown chanting "Criminal bankers caused this crisis!" and pelted the stock exchange building with old shoes.

Protesters also accused NATO, which has its headquarters in Brussels, of wasting taxpayer money on the wars in Libya and Afghanistan, saying that one European soldier deployed to Afghanistan costs the equivalent of 11 high school teachers.

Some 300 activists rallied in Helsinki with homemade signs and stalls full of art and food.

Across the Atlantic, hundreds protested near the Toronto Stock Exchange and the headquarters of major Canadian banks to decry what they called government-abetted corporate greed. Protests were also being held in Montreal, Vancouver, Halifax and Winnipeg.

In New York, hundreds marched on a Chase bank to protest the role banks played in the financial crisis, and demonstrations culminated in an "Occupation Party" in Times Square.

In South Africa, about 50 activists rallied outside the Johannesburg Stock Exchange to demand more jobs, free education and universal healthcare.

Support for the anti-capitalist protest movement was light in Asia, where the global economy is booming. About 300 people turned out in Sydney, while another 200 chanted anti-nuclear slogans outside the Tokyo Electric Power Co., which operates the tsunami-hit Fukushima Dai-ichi nuclear plant. In the Philippines, 100 people marched on the U.S. Embassy in Manila.

PHOTO GALLERY
Occupy around the world (voting off) (CLONED)
Download
Calling all HuffPost superfans!
Sign up for membership to become a founding member and help shape HuffPost's next chapter
Join HuffPost 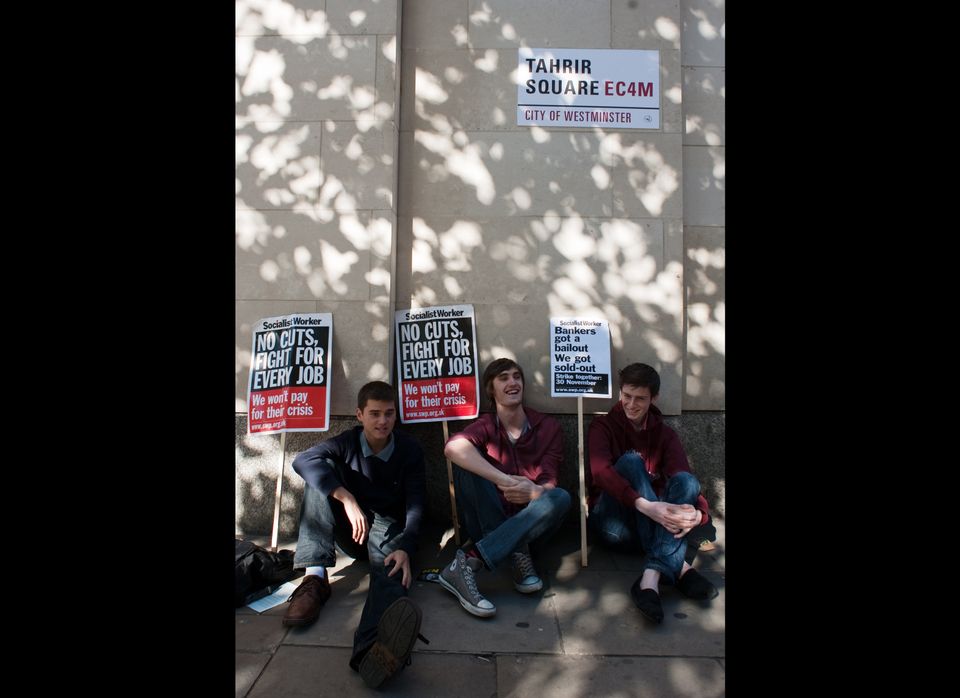 1 / 15
London
A temporary sign reading 'Tahrir Square' is shown on the wall outside Saint Paul's Cathedral in central London as protestors gather on October 15, 2011. Around 800 people rallied in London's financial heart Saturday amid a heavy police presence as part of world protests against corporate greed and budget cutbacks. Inspired by the Occupy Wall Street movement and Spain's 'Indignants', people began taking to the streets across the world, targeting 951 cities in 82 countries. (Getty)
Getty