When the paper Mache golden calf arrived at the church, it looked ever so much like the Wall Street Bull. I am not secretly cursing. The calf animal looked like a bull animal. Our choir director and one of our ministers carried it on their shoulders, from its rented van up Thompson Street, from Houston Street, into Judson Memorial Church around 8 p.m. on Saturday night. What surprised these two religious soldiers was how many people in the open bars recognized it immediately, "Why, that is the golden calf. You know, from the bible."

James Salt of Catholics United, who was on a spiritual retreat the weekend before, made the calf. He built and designed it within three days. Why? He was inspired by the actions of Occupy Wall Street and wanted to lend spiritual and biblical support. Faith in Public Life rented the van and brought it into town. We put it on our altar, and then carried it down to Wall Street on Sunday to feature it in our multifaith worship service. We are in the process of reproducing the calf as I write. Why? The Calf has returned to D.C. for the weekend's protests there.

When the original calf arrived in our empty sanctuary on Saturday night, about a dozen of us gathered to greet it. The artist was there as well to humbly tell us how he built it. We were moved to pray, which I have to admit is not something we do that often on Saturday nights. We took turns reading Exodus 32, verse by verse. We knew where to find the original golden calf story but we had rarely heard it in the context of paper mache, built into fifty pounds of calf. We started with verse one, how the Exodus people were disappointed with the same Moses who had taken them out of the wilderness. Then Aaron was summoned to leadership. Aaron plotted an overthrow of Moses by building a new altar, a golden calf, made from the earrings of the people. (Some biblical scholars argue that the women refused their jewelry. Who knows?) The people had a big expensive party in front of their handmade idol. Then Moses came back and destroyed the calf, begged God to repent of God's wrath against the people for their idolatry. Then the people repented. And God promised not to destroy them. We remain in prayer, as the calf of Wall Street is not yet in mothballs.

On Sunday, four strong men carried the calf on their shoulders, looking more like pallbearers in a street funeral than anything else. It was hot. They had yellow sponges to cushion the calf's blow to their shoulders. How they walked the two miles with the 50-pound paper Mache calf aloft is a matter of physics. But why they did it is a matter of the spirit. They suited up so reporters would not dare call them hippies. (There is nothing wrong with hippies except that people use them to stay distant from the Occupation Wall Street's general and universal message.) The pallbearers wanted to look like the Wall Street they protested. They marched and carried because they know what idolatry is. It is the replacement of a false God for a better one. Note I did not say true one. We all know how much we have internalized capitalism. We all know our distance from the truth. The 99% don't have an enemy in the 1% so much as a need to bring money in line with human values. Our multifaith service wanted to be sure not to resemble the punishmentalists or those who are absurdly sure about the divine or who like to find someone to blame for what has gone wrong. We went for the basics of our many faiths, the golden rule which is so distanced from and by the golden calf. "Do unto those downstream from you what you would have those upstream from you do to you." This rule applies to hippies, Republicans, church members, ministers, and financiers.

We all know how little Sabbath we keep, how frequently we let other people tell us our value, our place, our position. We all know how much we have let Wall Street control the conversation, alerting us that the market is "up" today or the market is "down." We brought the calf to Wall Street to confess our allegiance to false Gods and to announce that something was dying for us. That death is our own belief in the sacred calf of the Wall Street picture of the universe. The "mike check" was just the beginning of a new conversation, between and among people, about what is really important. What is important is people owning our own times, our own tongues, our own labor, our own worth. What is dead is Wall Street's control of the conversation and us. 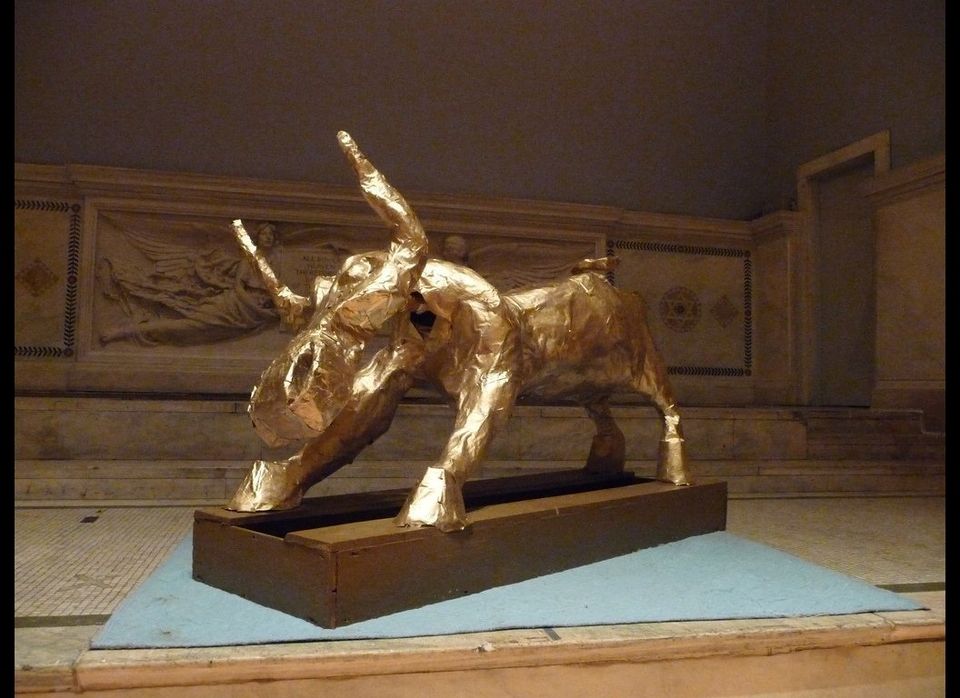