Events at Zuccotti Park, the epicenter of the Occupy Wall Street movement in Lower Manhattan, have become increasingly dramatic in recent days, as egos have clashed, visions competed, and the unity of the protesters has been questioned.

The debate over whether or not the protesters should draft a list of demands led to a New York Times piece that dominated a recent General Assembly discussion. Along with complaints from area residents and continued pressure from the city about cleanliness and noise, growing concerns about safety and theft on the premises, and the proposal of a Spokes Council which for two nights in a row failed to gain consensus from the GA, it has been a long week at Zuccotti Park.

The most vocal members of the movement will say quite clearly there are no "leaders," and the avoidance of that term has led to what some view as a lack of direction for Occupy Wall Street in New York. Differences among the occupiers are inevitable -- and as many working groups will tell you, it has been difficult to get things done.

There's no shortage of talking, and you never know who will take hold of the People's Mic. Persuasive speakers on all sides can give General Assembly meetings a roller-coaster feel. Someone always seems to oppose a budget proposal, or have a strong dissenting opinion on something that seems on its way to sure passage. Just one voice joining the debate at the last minute has the power to sway the entire discussion.

With every proposal, there are questions and there are concerns, and the process continues and continues. The facilitators say numerous times the group has strayed off process. Questions are sometimes ignored for being "off-topic" even when they aren't, time constraints are cited and frustrations boil over. Occupiers curse, speak out of turn and sometimes they just keep on talking, despite "Mic Check" calls over them. Those on all sides alienate each other.

This is what I have witnessed at Zuccotti the past few nights. On Thursday, the matter at hand was a proposal from Pulse -- the group of drummers -- for $8,000 for new musical instruments. They say they hoped to secure the funding after a $5,000 handmade drum was sabotaged and destroyed during a rain storm. They say that because they've been there since Day 1, they deserve the funding more than anyone.

"We have worked for you! Appreciate us!" the leader of the proposal shouted angrily to the GA in response to voices of dissent.

After a long debate, the proposal was tabled. No funding for the drummers. After the meeting, one drummer cursed and yelled at GA members for their decision. He confronted another occupier and the two shouted obscenities back and forth; a physical fight nearly erupted but a peacemaker came between them.

On Friday, a proposal for a Spokes Council -- a group led by cluster representatives that would make budgetary and logistical decisions -- was debated at length. The General Assembly meeting Friday night lasted from 7 p.m. to 1:30 a.m., even though they're officially only scheduled to last until 9 p.m. and quiet hours are supposed to begin after 11 p.m. The NYPD decided not to disrupt the assembly, and the People's Mic quieted as a sign of respect for the final two and a half hours.

But those two and a half hours were just as tense as the drummers' proposal. General Assembly members complained that they would lose power if a Spokes Council was formed, while facilitators and speakers for the working group behind the proposal insisted that the council would decentralize power in a necessary way. They argued that anyone could be part of working groups and clusters, which would each have a representative on the Spokes Council. One prominent organizer made the point that there would even be a group for people not in a working group, so everyone would be included in some way.

The concerns nonetheless continued. Occupiers raised their voices louder, saying they felt disenfranchised and confused. A two-sided document jam-packed with text contained all pertinent information about the proposal, but only five minutes were set aside to read it. "This is too confusing to read in five minutes," said one occupier. "We need more time," said another.

The two sides went back and forth. "This is a living document! It can be added to, amended to," a speaker pleaded. Another said the proposal has been in the works for three weeks, "workshopped to death," and they did not want to draw the process out longer. As the debate continued, those behind the proposal conceded, "No system is perfect."

In the end, the proponents of the Spokes Council, which included several working group members and a Finance Committee representative, caved to the dissenters -- even after making a significant amendment that would allow the General Assembly to dissolve the Spokes Council at any time. The occupiers were granted more time to consider the document; they now have five days before the GA reconvenes for a vote on Wednesday.

That decision was made after 16 blocked the proposal, meaning they were prepared to leave the movement if it was passed in its current form. They gave many different reasons for opposing it.

But an occupier who favored the Spokes Council wasn't convinced, saying in disbelief after the discussion ended, "That's it? What have we been doing the last 5 hours?"

The conflicts among occupiers can't continue forever, and the most passionate organizers know this. They're planning to "Occupy Central Park" next month -- on 11-11-11 -- and hope the move will bring the protesters together again and unite them with their counterparts across the world.

But there's no telling what will happen at Zuccotti Park before then. And the cold of winter lingers. 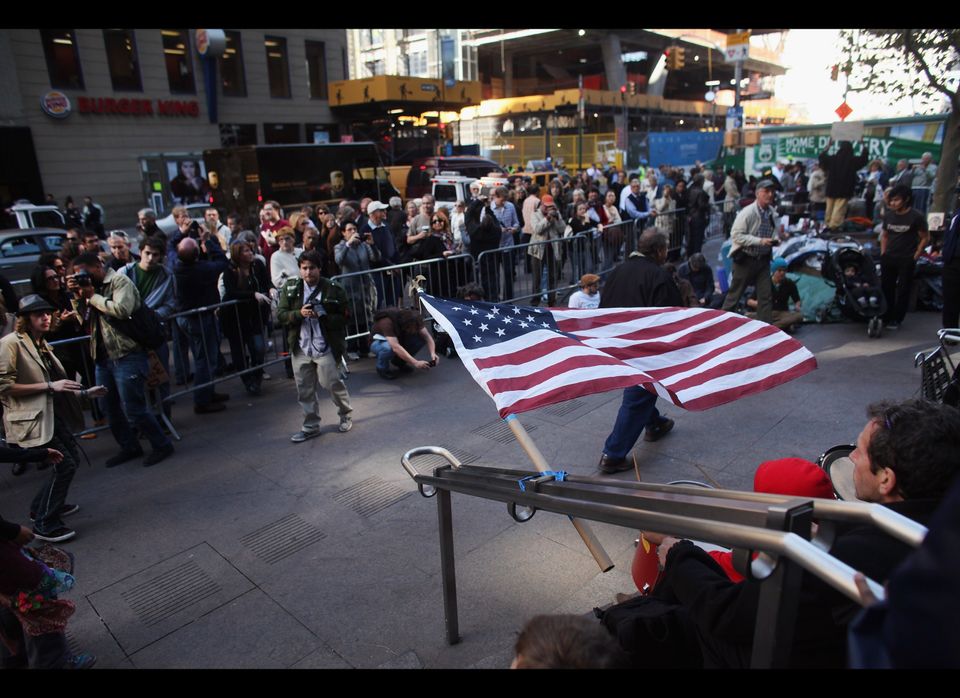 1 / 27
OWS Movement Turns One Month Old
NEW YORK, NY - OCTOBER 17: Pedestrians watch as people affiliated with the 'Occupy Wall Street' movement play music at Zuccotti Park in the Financial District near Wall Street on October 17, 2011 in New York City. The activists have been gradually converging on the financial district over the past month to rally against the influence of corporate money in politics among a host of other issues. The protests, which have no stated demands, have spread to other cities and a number of countries over the last week leading to hundreds of arrests as world leaders and police anticipate their next move. (Photo by Spencer Platt/Getty Images)
Getty