"We're not going to get any kind of real environmental reform while our politicians are being influenced by corporate dollars," Niko Segal-Wright told The Huffington Post as he stood among hundreds of others participating in the Occupy Wall Street protests at New York City's Zuccotti Park on a wet and windy fall afternoon.

"We're here to build a new society, basically," an unidentified man told HuffPost while grabbing some lunch from the pop-up cafeteria in the middle of the park. Seconds later, a song and dance broke out a few meters away, drawing dozens of onlookers and participants into the display. Just off to the side of them was silence as around 50 people sat and meditated before releasing into a lively chant.

Scenes like this have spread around the world, with individual political and fiscal motivations so diverse it is often hard to pinpoint the message.

But, dotted around the scene, environmentalists who have jumped on the anti-corporate bandwagon could be seen on Wednesday with signs and stalls calling to ban hydrofracking, end investments in big oil companies and introduce a carbon tax.

He said, "We can never do anything about global warming. (Because) Exxon gets in the way, Goldman Sachs gets in the way, the whole fossil fuel industry gets in the way. The sky does not belong to Exxon. They cannot keep using it as a sewer into which to dump their carbon."

Former vice president and a leader in the climate change debate, Al Gore wrote on his blog Wednesday in support of the protests: "From the economy to the climate crisis our leaders have pursued solutions that are not solving our problems, instead they propose policies that accomplish little."

Take a look at the scene this week and read what some environmentalists had to say about the movement: 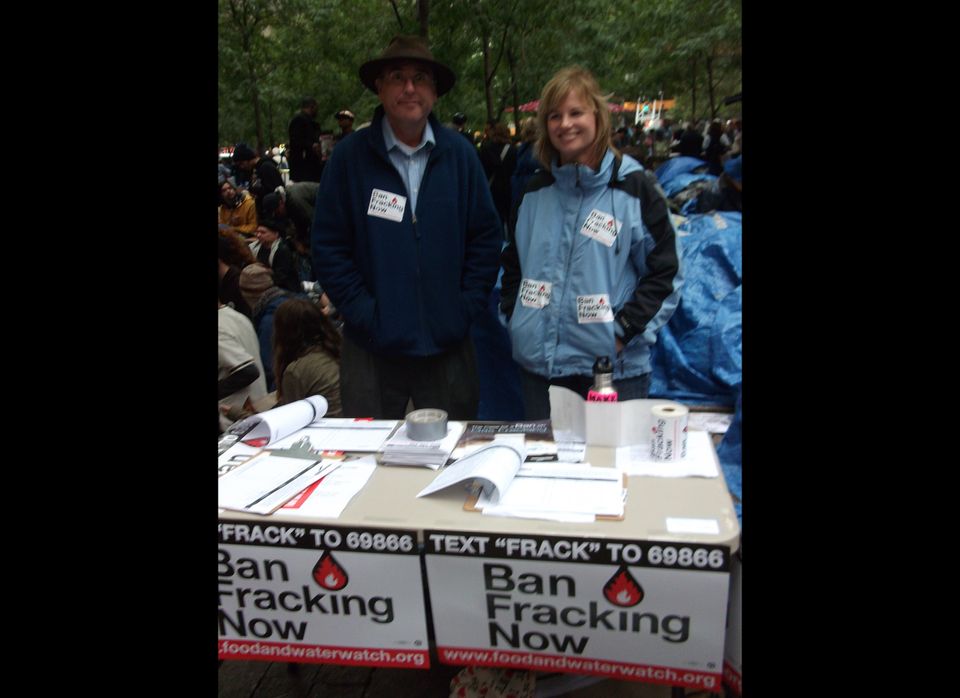 1 / 8
Eric Beltman -- Senior Organizer With Food And Water Watch
"We're here today mobilizing people against hydrofracking, which is an extraordinarily dangerous technique for drilling for natural gas because it threatens our water, our food and our air," said Beltman. "Corporate giants like Exxon Mobil ... are coming into communities and threatening our drinking water, our air and our food. So that's a message that resonates with a lot of the people here ... This has really been a great opportunity for us to spread our message and talk with other activists and to do coalition building and talking with our union brothers, other activists, allies and friends." "We are circulating our petition to Governor Andrew Cuomo of New York and we're urging him to take a position against fracking here in New York. Unfortunately, his department of environmental conservation ... <a href="http://www.nytimes.com/2011/07/01/nyregion/cuomo-will-seek-to-lift-drilling-ban.html?pagewanted=all" target="_hplink">has proposed opening up large portions of New York State to fracking</a>, which again is a tremendous threat to our water, our food, our air. We're trying to send a message that there are safer alternatives to natural gas, but there are no alternatives to water." Beltman of Food and Water Watch said on Wednesday he had gained "about three gazillion" signatures for the petition.
Bonnie Christian