While the nation salivates -- or trembles -- at the thought of how the Occupy Wall Street movement will affect elections for years to come (and bankers on Wall Street are already furious that Democratic politicians have murmured sweet support for the Occupy movement), an Occupy-style ballot initiative is being voted on as I type. It will be decided on November 1, up in Boulder.

It's all about transferring the keys to a centrally controlled function in our economy from the hands of a distant, multi-state, investor-owned monopoly that makes money mostly by burning coal, and putting those keys into the hands of locally elected people who can be approached from city hall to the hardware store, in a non-profit business model that lowers overhead costs, maximizes rate payer value and aims for local, distributed generation of clean energy.

2B and 2C call on the voters to allow the city to pursue, with teeth, the question of pulling away from Xcel Energy. If a favorable financial picture emerges through the inquiry, then forming a local and transparent municipal utility based on clean energy is permitted though not required, so this election is often termed a "next step" not a final step. "Munis," as they are called, give affordable, reliable service in thousands of communities in the nation, but Boulder's muni would bear the brand of clean energy as lived out by the city's many hundreds of clean energy entrepreneurs and experts. (The campaign site is here and the city's issue guide is here.)

These worries are at the core of the Occupy movement, which Nobel Laureate economist Joseph Stiglitz has called "socialized losses and privatized gains." And it turns out that the silent, hulking company behind folks' power oulet has often proven to be an agent of huge social risk and and private gain. 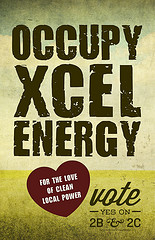 Big utilities are the "too big to fail" entities at the end of your power cord, being monopolies that are insulated from the risks of their undertakings, be they the chanciness of a big nuclear plant investment (think of the Fort St. Vrain Nuclear Plant that ran briefly and badly and was still paid off by rate payers), or the systemic risk of spewing fossil-fuel emissions for over a century resulting in the recent uptick in unprecedented deadly storms, or the straight-up investment risk of relying on coal supplies that are nowhere near as stout as proclaimed.

Actually, our nation's coal reliance is proving to be a ticking time bomb of risk, says leading Boulder energy advocate Leslie Glustrom, whose research revealing the work of the United States Geological Survey has shown that the U.S. has maybe 20 more years of affordable coal. And the subject has been getting attention for a few years (for example here or here). Think about that -- 20 more years of the "cheap" coal that runs about 45 percent our nation's grid.

Here are her own words in this interview (starting at minute 3:02):

...Our time frame for moving beyond coal is much closer to 20 years than the 200 years we've been told so often.

Once again our government has gotten it just plain wrong -- we might realize the government has just plain gotten it wrong in a number of areas (laughing) lately, and in this case the Energy Information Administration has been telling people we have 250 years of coal, but they have never analyzed that assessment for how much is actually accessible in any sort of economic or reasonable fashion.

When you look at the geologic studies that have been done by the United States Geological Survey you realize that way under 20 percent of this nation's coal is going to be economic accessible (3:48)...

(4:20) And then [if you] actually look at the coal mines, you realize that whether you look at the state level or mine specific level in Wyoming, where 40% of our country's coal comes from, you realize these coal mines are facing unbelievably serious constraints. Those are already incredibly apparent to anybody who is looking, but the problem is that no one is looking because everyone assumes we have over 200 years of coal. But if you start looking you realize the costs of coal are mounting quickly, you realize coal is not showing up at coal plants even though the coal plant has contracts; you realize like my utility in Colorado that the price they expect to pay for coal (next year) in 2010 is the price that last year they predicted they'd be paying in 2042.

So the folks who are in charge are just completely using the wrong frame for looking at coal because my utility is off by three decades. And when we asked them about their long term coal supply you get the answer back repeatedly in writing in these very legal formats, "We've no analysis of long term coal supply; we have no such thing." And so it's very important that our country come to understand that because if we drive over that cliff the way we've driven over the cliff with investment banking and the real estate industry and the big three and on and on, this is a cliff [that] is the mother of them all. Because our country doesn't understand how to function without electricity. (5:46)

The "my utility" she's referring to is Xcel, the same one Boulder is voting to separate from, the same utility that decided to complete construction of a 750 megawatt coal plant in Pueblo, after the U.S. Supreme Court decided that carbon dioxide was a hazard to human health -- also after Ms. Glustrom had been pelting the utility with questions about long term coal supplies to which they had no answers (for example, see the document called Total Amount of Coal Under Contract by Xcel 2008-2015: here).

Now we know, thanks to Glustrom, that Xcel's modeling assumed that coal costs will rise less than 2 percent a year even though between 2004 and 2009 Xcel's coal costs went up about 10 percent a year. On that she concluded, "With a [Colorado] system that's 60 percent coal, give or take, the cost of coal has an impact."

Though coal constraints are felt here in Colorado, they are no small bore regional issue, being felt nationally and globally. This summer utilities of China faced $2 billion in losses due to coal price spikes, and India is facing weather-related coal shortages to 85 gigawatts of installed coal-burning capacity. Xcel in Colorado and all coal-reliant utilities in the U.S. are playing with a deck stacked against them as they increasingly buy from the Powder River Basin in Wyoming, the motherlode coal supply of the U.S., which is headed into a brick wall -- or the cliff that's mother of them all (see pages 48-58 here).

And thus Boulder's quest was formed in leery concern about coal costs as well as for the need to sharply reduce planet-heating emissions, in a gesture that will serve as a warning to all coal based utilities and display an attractive business model to other cities for keeping more energy revenues at home. As affluent as Boulder is, it can feel the injustice of being bullied into continuing to let $114 million of its annual economic activity be owned by a multi-state corporation operating in an inherently destructive paradigm.

Xcel just this month moved to have Glustrom ousted from her traditional standing as a citizen intervenor in a docket at the Public Utilities Commission, where her presence gives a patina of public involvement at the regulatory body. Xcel also just threatened to cut off Boulder's access to clean energy programs if 2B and 2C pass, a threat that appears to be a sham. It was done on the logic that rate payers of Colorado should not foot the bill for Boulder's use of program monies while it is seceding, though earlier, Xcel sought repayment from Colorado ratepayers for its excess expenses on Boulder's Smart Grid City. This gambit is not about logic to benefit ratepayers, it's about hardball to benefit shareholders.

These examples show one utility acting in a nasty way during an election season, since as we know power never gives up without a fight. But the larger point is that big, centrally powerful utilities are risk factories on par with the big banks that gambled with our economy at tax payers' expense. But the utilities are gambling with our energy supply as well as our planet. And Boulder is doing something about it.

This column was written in honor of Boulder activist Dan Friedlander.