Denver Police in riot gear clashed with Occupy Denver again last night around midnight, forcibly clearing out approximately 40 protesters from Civic Center Park and removing their shanty structures, according to The Denver Post.

While some protesters took a knee and began Tebowing as the officers lined up around the park and Denver Public Library, CBS4 reports that some protesters responded to the police action by setting structures on fire forcing fire crews to extinguish the flames.

According to the Colorado State Patrol Facebook page, protesters also took pieces of wood, parking cones, and other objects into the street between Civic Center and Lincoln parks.

The Denver Post is reporting that there were a total of 9 people arrested during last night's Occupy Denver eviction from Civic Center Park. The Denver Post lists the names and ages of all those arrested.

Chief of Police Robert White and Denver Mayor Michael Hancock said at a news conference today that they want to keep lines of communication open with the protesters, but made one thing clear: structures on the park sidewalks will not be tolerated. "If it goes up today, it goes down today," White said.

Today at 4:30 we will be meeting at our usual spot to discuss a candlelight vigil for this evening. We really request that you come down when ever you can tonight and participate in making decisions as to what to do next. Please remember to bring your patience and kindness with you, we need those to work together. GA is at 7, we look forward to talking to as many of you as possible!..solidarity..

Once the protesters were cleared from the park, city bulldozers then scooped up or crushed the remaining structures, sleeping bags, tarps, trash at the scene.

Occupy Denver's Facebook page states that at one point after a Public Works trucks had gathered and loaded up items collected at the park, protesters blocked the truck's way on Colfax, climbed in and started taking their belongings back. (Scroll down to watch video below between 4:40-5:40 for footage of the protesters confronting and climbing into a Public Works vehicle).

By early Tuesday morning, there was no one left at the Occupy Denver site at Civic Center Park which has not been empty for more than two months. 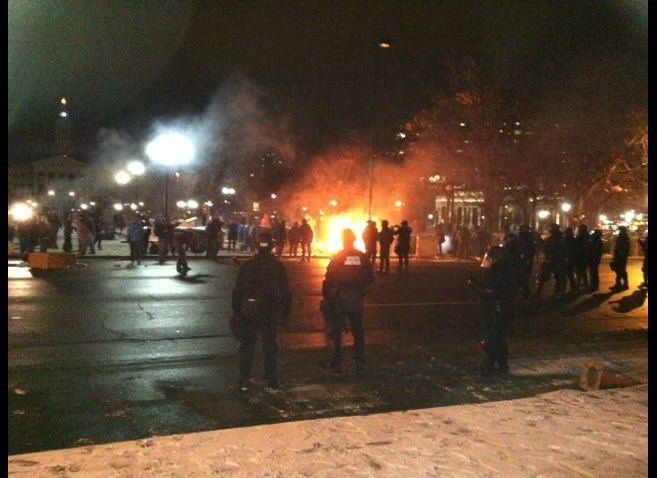 1 / 5
#OccupyDenver: Eviction Dec. 19
Denver Police officers and Colorado State Troopers await the arrival of firefighters as others move protesters away from the flames. via <a href="http://www.facebook.com/ColoradoStatePatrol" target="_hplink">Colorado State Patrol Facebook page</a>.