The Occupy Wall Street movement is gaining momentum in cities around the nation. In New York, the protesters are in their third week and large numbers of demonstrators are gathering in other cities across the nation like Los Angeles, Boston, Kansas City, Chicago and Denver.

The Occupy Denver movement has just begun, but their first rally gathered nearly 1000 protesters and the march to the Federal Reserve on 16th Street Mall over the weekend reportedly attracted around 500 protesters. They have set up a camp at Civic Center Park that serves as a central organizing spot for the Denver branch of the movement.

HuffPost recently sat down with Brett Starr, a Denver occupier, who shies away from being called a “leader” in a movement that has prided itself on being leaderless. However Starr is deeply involved with the movement, attending protests, helping build websites for the cause and speaking to the media on behalf of his fellow protesters.

Starr is just one example of the varied backgrounds of these occupiers, they don't fit a single mold and come from all walks of life. He's a 32-year-old Boulder, Colo. native that moved back to Colorado six years ago. When he's not occupying, Starr is a House music producer and DJ that puts on shows at clubs in Denver and around the nation. He also owns his own small events productions company called Supernova.

So, how did this musician move from the clubs to the streets? Starr said, “I've spent most of my adult life in sales jobs consuming and producing like a battery for a broken capitalist machine in which the struggle of many benefits few. I know deep in my heart things are not supposed to be the way they are now, in a natural world. I want to live a life of service and love. I'm protesting because I am the 99%.”

What brought the Occupy Wall Street movement to Denver?
Well, there's just as many citizens in Denver as there are anywhere else who have been affected by the the upper 1%'s stranglehold on human existence. The control of legislature, the control of media and information online, the control of our resources; this is all determined by money. Those who have the most, dictate what happens, using their dollars as power. Since citizens of Denver have seen that standing up to this blatantly unfair truth about our society is a possibility now -- because of those occupying Wall Street -- there is fertile ground here for an occupation of our city. Occupy Denver stands in solidarity to Occupy Wall Street and what they stand for. Our mission statement can be found at Occupy Denver.

Who are “the 99%” involved in the Denver demonstrations?
"The 99%" have stories diverse as the lives of those who embody them. The single mother who has $50 thousand in student loan debt but can't find a job paying more than $12 an hour and can't afford insurance for her child. The Iraq veteran who has Post Traumatic Stress Disorder and lives in his mother's basement because he can't get a handle on his anxiety enough to live on his own. The 14-year-old girl, who spoke at our rally on the steps of the Capitol building on Saturday, who knows that the increasing deficit is a result of the Fed's self-perpetuating game of power through interest rates is going to prevent her from being able to live free of slaving her adult life away in a job that she hates just to keep up with her mortgage, car loan and and credit cards. The stories are endless. You can see many more at the WeAreThe99Percent Tumblr.

What are the principles of the movement? End goals?
There has not been a specific demand(s) laid out yet. The media would like to squeeze one out of us, but we are not going to give them one until we come to a final massive democratic decisions on what that demand(s) should be. There is a working, vote-able list here. There is no planned "end" to these occupations.

How has social media affected these protests across the nation?
Social media has, for the most part, been the single cause for the occupations, much like what was seen in Cairo, Egypt last Summer. The mainstream media has blacked out the voice and stories of the movement for the obvious reasons that it is controlled by those whom we are looking to take power from. However social media is a beast that cannot be quelled and we have it as our pet.

We all communicate through email, Facebook groups, blogs, and Twitter. We are all very well connected not only across the US, but also Canada, Europe... everywhere. It's easy.

How many people join the cause daily?
Days range from 20 to 150 people. The first rally/march saw 1000 come through the occupation and we took Colfax and the Federal Reserve via 16th St Mall with nearly 500 protesters.

How has the Denver Police Department reacted to the occupation/marches?
The DPD has been extremely supportive. They provided nice escorts on Colfax and the mall. I think they know they are the 99% percent too.

How long will the protests last? Is there an end?
We will be at Civic Center Park indefinitely. Once change has been made permanent, and the people believe it -- that having most of the money in this world no longer means you can control the way the world works, occupation will end.

If the occupation stretches into winter, how do you intend on dealing with the elements and keeping the protest fires burning?
It's been amazing to see how the community has rallied anything the occupation needs to survive. No one is going to let people freeze to death out there and one structure has already been built for the kitchen. You may very well see a designer "shanty" town come up at the Capitol with space heaters and ground cover in order to house occupiers through harsh weather.

What are upcoming "Occupying Denver" events/marches?
Occupation is 24/7 so the biggest thing is just to get down there and be: Hold a sign, talk to interesting people, have a bite from the kitchen. But rallies/marches will occur every Saturday at noon. General Assemblies are available at 3 p.m. and 7 p.m. daily to have democratic discussions and decision making about occupation operations. 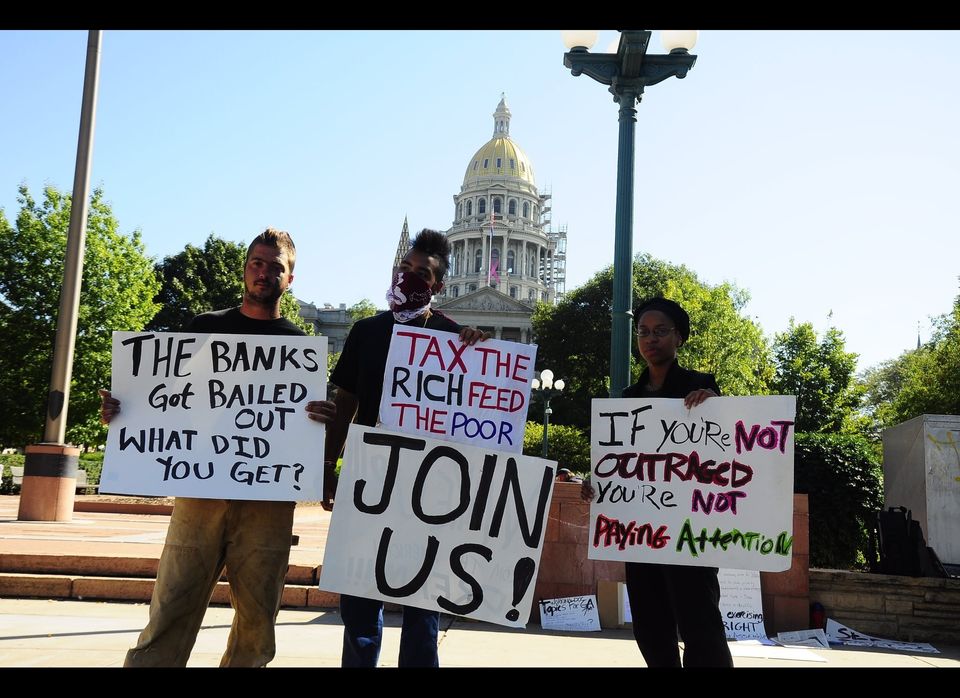