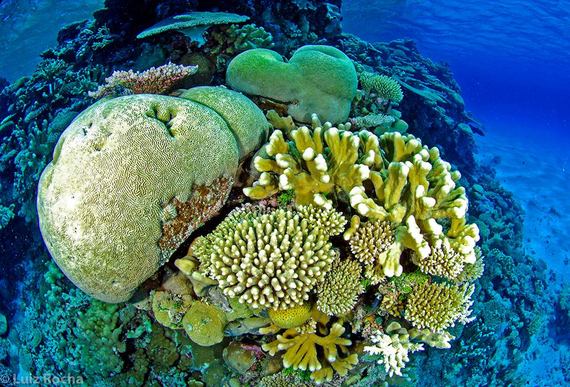 A healthy coral reef is one of the diverse a appealing ecosystems on the planet. Photo: Luiz Rocha.

A large proportion of the carbon dioxide dumped in the atmosphere by humans ends up in the oceans, and when this CO2 interacts with ocean water, it turns the ocean more acidic in a process known as ocean acidification. Even though this is one of the greatest environmental challenges facing our planet today, measuring its effects is extremely difficult because of the sheer volume of the ocean and the slow speed at which the process is happening. A common criticism of studies that attempt to do so is that most experiments are done in small tanks, and that conditions in these tanks might be vastly different from those in actual ocean habitats. Ideally, a study about the impacts of ocean acidification would need to measure variables like reef coral growth from 100 years ago and compare them with growth rates today. Scientists don't have time machines, but we do have the next best thing: changing the pH of a natural reef to what it was 100 years ago.

To change the pH in a natural reef, scientists would have to pump a chemical like sodium hydroxide to the water "upstream" and wait for it to flow over the reef. This was exactly the strategy of a group led by Drs. Rebecca Albright and Ken Caldeira, scientists at Stanford University's Carnegie Institution for Science. The researchers manipulated the chemistry of seawater flowing over a natural coral reef (not in an aquarium) and observed the coral's response. 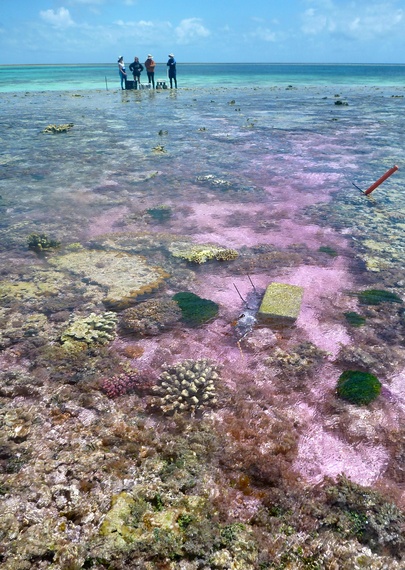 Sea water with a pH raised to levels of 100 years ago flows over a natural reef. Photo: Rebecca Albright/Carnegie Institution for Science.

The group detected a significantly higher calcification rate (meaning more growth) in corals exposed to ocean conditions that existed 100 years ago. These results show, for the first time using a large field experiment under natural conditions, that ocean acidification is already affecting coral reefs in a negative way. This important work was published today in Nature.

"Our work provides the first strong evidence from experiments on a natural ecosystem that ocean acidification is already slowing coral reef growth," says Albright. "Ocean acidification is already taking its toll on coral reef communities. This is no longer a fear for the future; it is the reality of today." This growth-reducing acidification is one more threat coral reefs face in addition to pollution, sedimentation, global warming, and overfishing. Caldeira is very worried about the future of coral reefs, and says that "if we don't take action on this issue very rapidly, coral reefs--and everything that depends on them, including both wildlife and local communities--will not survive into the next century."

Coral reefs provide numerous ecosystem services to coastal communities around the world, including billions of dollars in income from tourism, protection from storms and waves, and food to an estimated one billion people. Their intrinsic value is truly immeasurable; even though they cover only a tiny fraction of the surface the ocean (less than 0.2%), approximately one quarter of all marine species live nowhere else on the planet except for coral reefs. We might be the generation responsible for their demise, but we also have the power to save them.