The government of Britain recently announced the designation of the world's largest marine reserve in the waters surrounding Pitcairn Island, a British overseas territory in the South Pacific. One of the remotest populated islands in the world, Pitcairn is best known as the final refuge of mutineers who, on April 28, 1789, seized control of the HMS Bounty, a British naval vessel on a mission to transport breadfruit plants from Tahiti to the West Indies.

The ship's captain, William Bligh, was put overboard in a 23-foot open launch along with 18 of his crew who had remained loyal to him. Some of the mutineers stayed in Tahiti; the rest sailed the Bounty in search of a safe haven where it was unlikely that the Royal Navy would ever find them.

Remarkably, Bligh made it back to Britain, prompting the Admiralty to send a ship to capture the mutineers and bring them to justice. Those who had stayed in Tahiti were apprehended, and the majority were taken to England, where they were tried in a naval court. Of these, three were hanged, four were acquitted, and three were pardoned.

But those who settled in Pitcairn were never found. 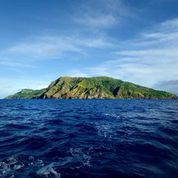 Today, the resident population of Pitcairn numbers 51 people, most of whom are descendants of the mutineers.

Pitcairn's closest major landmass, New Zealand, is located 4,500 kilometers away. Until recently, fuel costs needed to traverse such long distances constrained commercial fishing around Pitcairn. At the same time, the island's steep shoreline and limited access discourages fishing by residents. As a result, the waters surrounding Pitcairn are among the most pristine in the world, a major factor behind the British decision to fully protect this area while there is still an opportunity to do so. The reserve, which begins 12 miles from the shoreline, encompasses over 830,000 square kilometers of ocean -- more than three times the size of the United Kingdom -- in which all extractive activity, including fishing, is prohibited. It is the second marine reserve designated by the United Kingdom in the past five years, the first being the Chagos Archipelago, a chain of islands and atolls encompassing 640,000 square kilometers in the Indian Ocean.

A scientific expedition mounted by the National Geographic Society and Pew in March 2012 found the waters surrounding Pitcairn dazzling in diversity, harboring an estimated 1,249 species of marine life, including 365 species of fish (two of which are found nowhere else in the world), 22 species of whales and dolphins, two species of sea turtles, and what is believed to be the world's deepest living plant -- a species of encrusting coralline algae found 382 meters below sea level.

The British announcement comes at a time when greater attention is being paid than ever before to the problems affecting the world's oceans. It is also the first marine reserve in history to benefit from a newly developed satellite monitoring system that makes it possible to identify boats engaged in illegal fishing, to monitor their movement and to provide enforcement agencies and customs personnel with information that will make it easier and ultimately far less expensive to apprehend these vessels when they come into port, as opposed to chasing them on the open ocean, an expensive and often dangerous activity.

This system, called "Eyes on the Seas," developed by the Pew Charitable Trusts and the UK-based Satellite Applications Catapult, marks a major stride forward in the global fight to end illegal fishing, which is estimated to account for 20 percent of the global catch each year and valued at more than $23.5 billion.

With the Pitcairn designation, roughly 1.5 percent of the world's oceans are fully protected, far less than the 30 percent that marine scientists say is necessary to preserve a healthy representative sample of the Earth's ocean environment.

Remote geography made it possible for the mutineers of the Bounty to escape capture by the British Navy. It is also the primary reason that the waters surrounding Pitcairn have escaped the impacts of fishing and other extractive activities that have damaged so much of the world's oceans.

Today, remarkably few places qualify as "remote." The world is far smaller and more accessible than it was in the waning years of the 18th century, when mutineers took control of the Bounty. Geographic isolation will not protect these places in the future. That responsibility is ours.

Joshua Reichert is an executive vice president at the Pew Charitable Trusts and directs its environment work.