Even though the world's oceans cover two thirds of the surface of our planet, they rarely get the attention they deserve. Perhaps we take the oceans and the services they provide us for granted because we - literally speaking - can't see what is going on under the surface? In my view, it is high time we placed healthy and productive oceans higher up the global agenda.

The world's oceans produce half of the oxygen we breathe, and they absorb about one third of our CO2 emissions. They are a source of food and they provide us with employment, energy and transport opportunities. Given that the world's population is expected to grow by two billon people over the next 30 years, the future share of food and other resources coming from the oceans will have to increase substantially to meet growing demand.

The world's oceans are of crucial importance for mankind, and yet they are under threat due to human activities. The current state of our oceans gives cause for great concern: three out of ten of the world's commercial fish stocks are overexploited and marine ecosystems are under severe pressure from global warming, ocean acidification and pollution.

This means that we are facing a double challenge. We have to halt the degradation of the world's marine ecosystems at the same time as we increase ocean productivity. Last year, world leaders agreed on a plan to eradicate extreme poverty by 2030. Ensuring healthy and productive oceans is essential if we are to reach the sustainable development goals.

For this reason, I have accepted Secretary Kerry's invitation to become an ocean champion. I will use the Our Ocean Conference and other international arenas where I take part to promote sustainable use of ocean resources. You will hear me repeating the message that we must manage our oceans wisely, and that we must find a balance between sustainable use and conservation of living marine resources.

Now, there is nothing strange about a foreign minister from Norway being an advocate for healthy and productive oceans. The oceans have shaped Norway's development and they are part of the identity of most Norwegians. More than two thirds of the value of Norwegian exports come from ocean-related activities, and Norway's economy shows that sustainable ocean management can provide a strong platform for stable economic growth. I firmly believe that ensuring healthy and productive oceans is in my country's as well as in the global interest. 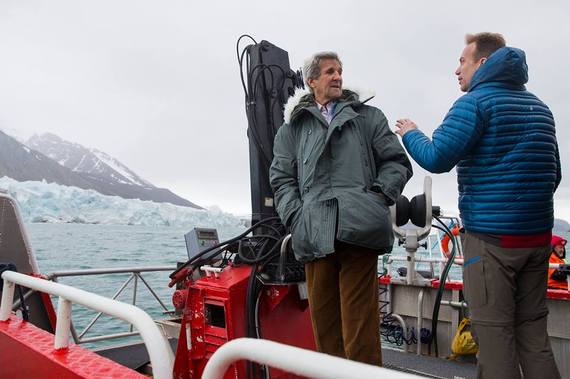 One of my biggest concerns is the impact of climate change on the marine environment. We have all heard how densely populated coastal areas, including coastal megacities and key agricultural regions, are being threatened by sea level rise. In the Arctic, glaciers are retreating and sea ice is melting at a record pace. But under the surface, invisible to the human eye, equally dramatic changes are taking place. Warmer water and ocean acidification are posing a silent threat to entire ecosystems.

In its latest report, the Intergovernmental Panel on Climate Change (IPCC) predicts that global climate change will alter ocean productivity and cause shifts in the distribution of marine species. We can expect to see invasions of new species at high latitudes and high rates of extinction in the tropics and in semi-enclosed seas. In addition, research shows that the absorption of huge amounts of CO2 by the oceans inhibits shell growth and may cause reproductive disorders in a range of marine animals. The environmental and economic consequences of this could be devastating.

The world's oceans are interdependent. Fish stocks know no borders and marine pollution travels long distances. Actors involved in illegal, unreported and unregulated (IUU) fishing are part of international criminal networks that steal from our common resources. In other words: sustainable use of the oceans requires enhanced international cooperation and the implementation of common rules.

The world needs more ocean champions who are committed to sustainable ocean management. If we join forces, we will stand a far better chance of safeguarding our oceans for future generations.

Let's place the issue of healthy and productive oceans where it belongs - at the top of the global agenda. After all, it is the very life support system of our planet that is at stake.