Our solar system's largest moon may be harboring a deep secret -- a subterranean saltwater ocean.

That's right. NASA's Hubble Space Telescope has spotted signs of a vast ocean lurking beneath the surface of Jupiter's moon Ganymede. How vast? The ocean is thought to have more H2O than all of the bodies of water on Earth's surface.

"The solar system is now looking like a pretty soggy place," Jim Green, director of planetary science at NASA headquarters in Washington, D.C., said during a press conference, the Associated Press reported.

Water is believed to exist on other moons in our solar system -- including Jupiter's moon Europa and Saturn's moon Enceladus as well as our own moon.

Scientists have suspected since the 1970s that Ganymede had an ocean. And so a team of researchers led by Joachim Saur, a professor of geophysics at the University of Cologne in Germany, recently took a close look at glowing ribbons of hot gas on the moon, called aurorae, to find clues.

Ganymede is the only moon in our solar system with its own magnetic field -- and, just as Earth's magnetic field yields aurorae, so does Ganymede's. The aurorae rock back and forth when they interact with any nearby magnetic field, including that of Jupiter. 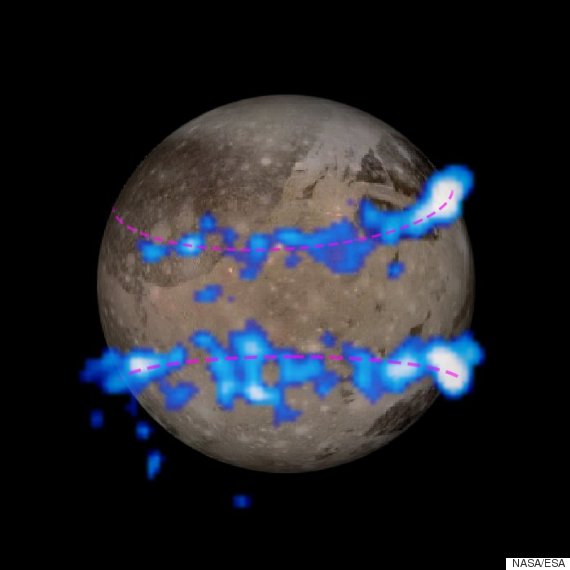 NASA Hubble Space Telescope images of Ganymede's auroral belts (colored blue in this illustration) are overlaid on a Galileo orbiter image of Ganymede. The amount of rocking of the moon's magnetic field suggests that the moon has a subsurface saltwater ocean.

If the aurorae are affected by Jupiter's magnetic field alone, they should be rocking six degrees. But the researchers found that the aurorae are rocking only two degrees -- "exactly like predicted when there is an ocean present," Saur told CBS News. "So this confirms the existence of an ocean and simultaneously rules out the absence of an ocean."

The researchers estimate that the ocean is 60 miles (100 kilometers) thick -- 10 times deeper than Earth's oceans -- and buried about 95 miles under Ganymede's icy crust.

“This discovery marks a significant milestone,” John Grunsfeld, associate administrator of NASA’s Science Mission Directorate at NASA headquarters, said in a written statement. "In its 25 years in orbit, Hubble has made many scientific discoveries in our own solar system. A deep ocean under the icy crust of Ganymede opens up further exciting possibilities for life beyond Earth."

The new research was published online March 12, 2015 in the Journal of Geophysical Research.