For the past year I have extensively covered the 'Global War Against Nature.' Without question the relentless massacring of whales has been the most gut wrenching of all the atrocities to report upon.

Perhaps this is because in the spring of 2012 my faithful Chesapeake Bay retriever and I spent the most spellbinding half hour off the coast of Malibu, California in a small dingy within a couple feet of a 125-ton majestic blue whale - the largest creature in the Animal Kingdom. That humbling experience conveyed a message to me for our species: A message of respect for one another, and respect for every strand within nature's magnificent interdependent web of life.

That sublime experience is juxtapositioned to the bedlam that is taking place 24/7, 365 in our seas; that is, persecution of Earth's remaining whales. 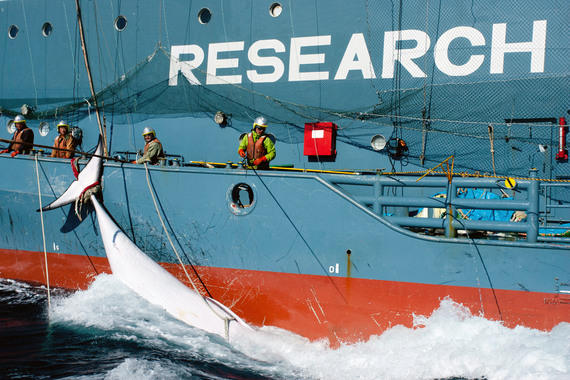 Since June of 2010 Japan, Norway and Iceland have been attempting to bully the International Whaling Commission to remove the 27-year moratorium on commercial whaling.

Japan, Norway and Iceland in fact set their own whale-killing quotas without any regard whatsoever for a worldwide agreement. These bloodthirsty ocean-killing countries have annihilated over 33,000 whales since 1986 Moratorium, alone. Let me remind you that humans have slaughtered five million whales since the 1800s. There are no more than 3 percent of the whales present today in our oceans than a mere 200 years ago. 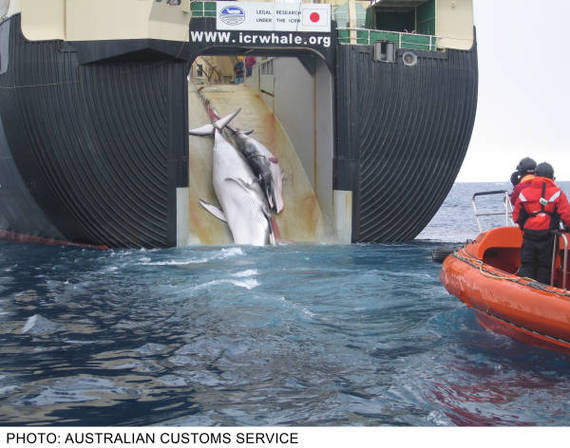 A minke whale and its calf being loaded onto the ignoble Japanese slaughterhouse The Nissan Maru in the Southern Ocean International Whale Sanctuary.

Japan's repugnant quota of 935 minke, 50 endangered fin and 50 endangered humpback whales in the Southern Ocean Sanctuary enables them to maraud at will amongst 19 million square miles. It is indeed distressing for those of us who study nature and care deeply about Earth's ailing life support systems - our oceans. The only entity between the gruesome harpooned-tipped grenades and the ocean-killing Japanese whalers are the brave warriors of the direct-action conservation group Sea Shepherd Australia. The 10th year of the prolonged Japanese plundering of the Great Southern Ocean has just begun and there are 90 more poaching days ahead. 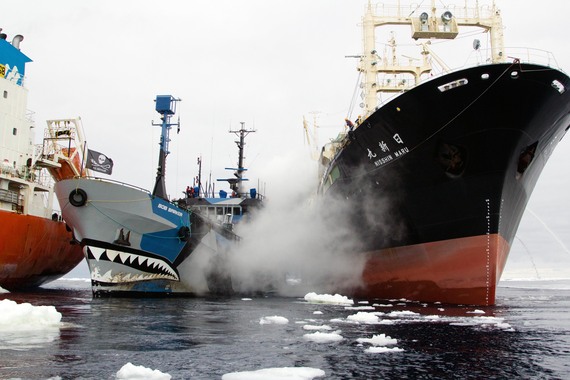 The legendary Animal Kingdom protector Bob Barker believes that all wild animals deserve to live free on planet Earth. Make a difference and support Sea Shepherd Australia as they valiantly protect the great whales of the Southern Ocean within an international whale sanctuary.

Meanwhile on the other side of the globe the Icelandic government quietly increased their quota by authorizing the death warrants of 770 endangered fin in addition to 1,145 minke whales over the next five years.

This is incongruous since only 3 percent of Icelanders even eat whale meat. So Iceland's only whaling company is now left murdering more sentient endangered whales to feed a burgeoning dog food market in Japan.

The Director of Sea Shepherd Australia, Jeff Hansen summed up the prolonged global looting spree of our oceans this way: "These whale poachers have no respect for the global moratorium and the wishes of the majority of people on this planet that want to see an end to whaling. Whales are worth far more to us alive than they ever did from whaling, especially now with the explosion of the global whale watching industry and the sheer importance whales play in the health of our oceans. Iceland increasing their murdering quota of endangered fin whales to be sold to Japan, where much of the whale meat will end up as dog food, is a complete lack of respect for these beautiful, intelligent and socially complex mammals, a complete lack of respect for the International Union for the Conservation of Nature and a complete lack of respect for our children that want to grow up in world with the great whales."

Moreover, 175,000 tourists visit Iceland each year specifically to whale watch and spend millions of dollars to see these splendid creatures alive and well.

Lastly, in the summer of 2012 Danish scientists inspected a North Atlantic endangered fin whale washed-up along Denmark's coastline. They were stunned to discover this 74-ton regal rorqual whale was 140 years old - 24 years older than the previous oldest known fin whale. 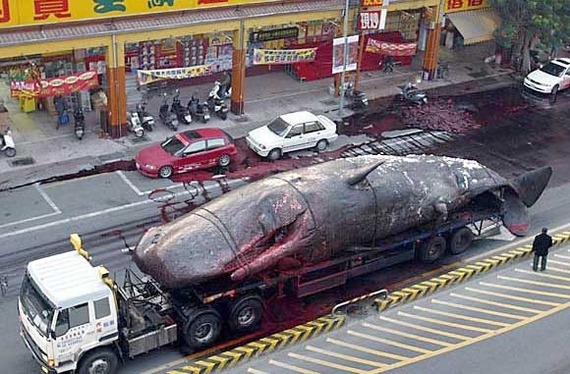 Both filter feeding and toothed whales (like this exquisite sperm whale atop of the flatbed semi) are crucial for the health of our ocean. Using whales to feed dogs in Japan is quickly killing our oceans and the life support systems of Earth.

Fins swim in the North Atlantic around Iceland. Only a loathsome human bully unremittingly slaughters animals just for the sake of it. Killing ancient whales to feed Japanese dogs is bloody wrong!

It's time to end the 'War Against Nature,' now.