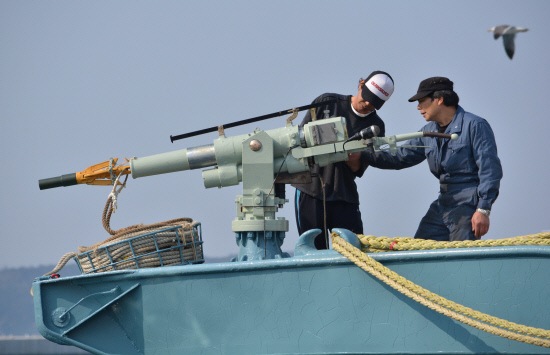 A grenade-tipped harpoon aboard a Northwest Pacific Japanese whale-killing ship. Since the 1986 world moratorium on whaling, Japan, Iceland and Norway have killed over 32,000 whales. Photo credit: thesundaydaily.com

Last year, the Icelandic government unilaterally increased its ocean-killing quota by authorizing death warrants for 770 endangered Fin, in addition to 1,145 Northern Minke whales, over the next five years.

Join Earth Dr Reese Halter from Los Angeles for another segment of SOS as he tells us about about loathsome North Sea poachers, and what you can do to make a difference!


This is incongruous since only three percent of Icelanders even eat whale meat. So, instead, Iceland's only whaling company is left murdering whales to supply Japan's burgeoning dog food market. 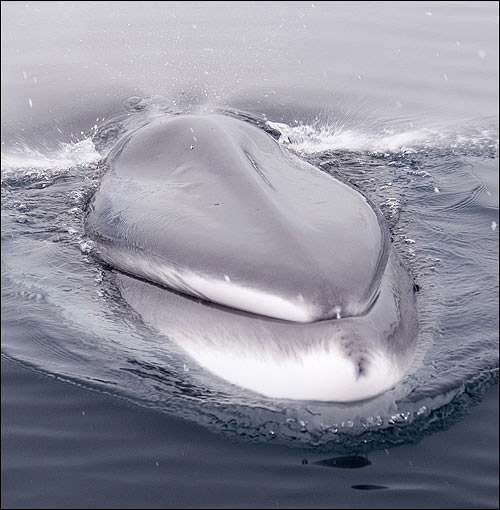 Fins are the second largest whales to swim the seas, They play a crucial ecological role in fertilizing the seas. Photo credit: animalplanet.com


Both Iceland and Japan are in contravention of the Convention on International Trade in Endangered Species of Wild Fauna and Flora prohibiting sending or receiving endangered animal parts.

Similar to the insatiable Southeast Asian and Chinese demand for rhino horns and elephant tusks, brains and genitalia, Japan's voracious lust for whale meat is driving bloodthirsty Icelanders to higher levels of carnage. 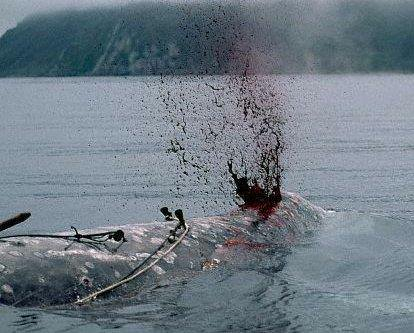 Whaling is a brutal bloodlust that inflicts excruciating pain for almost one hour prior to the death of the harpooned creature. Photo credit alternews.com


Since 2008, over 5,500 tons of endangered Fin meat has been exported from Iceland, including a ghastly shipment exceeding 2,000 tons in March.

Last year, when 130 tons of endangered Fin meat landed in Germany, en route to Japan, it was promptly refused entry and quickly returned to Iceland. Sadly, that was not the case in February of this year. Twelve containers of Icelandic endangered Fin meat landed in Halifax, Nova Scotia, was shipped 5,500 miles across Canadian railway, received in Vancouver, British Columbia then loaded onto a cargo freighter bound for Japan. 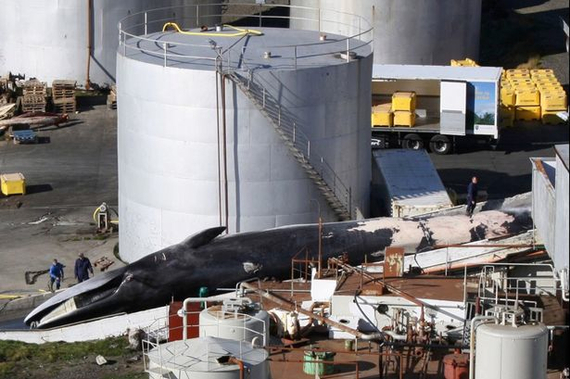 Icelandic whalers prepare to carve up a Fin whale to supply Japan's robust pet food market. This is an act of global ecocide, impoverishing all children of the Earth. Photo credit: alternews.com


Perplexingly, most Japanese do not eat whale meat. Yet, 6,000 metric tons of it is cold stored. Why is Japan stockpiling endangered whale meat? 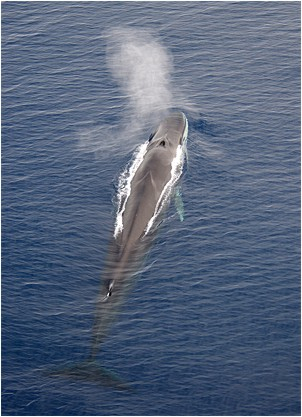 Fins can reach almost 90 feet and weigh an astonishing 74 tons. They have been called 'The Greyhounds of the Sea' by Roy Chapman Andrews for their beautiful, slender bodies which resemble racing yachts. Fins can easily surpass the speed of the fastest ocean steamship. Photo credit SeaShepherd.org


In March, the International Court of Justice (ICJ) in The Hague rebuked Japan for attempting to use 'science' to justify a decade of poaching protected whales within an international sanctuary.

When it comes to killing ocean life, Japan's egregious sense of entitlement raises an even more poignant question: What happens when the ICJ rules to protect nature and superpowers like Japan disregard the highest court's judgments? 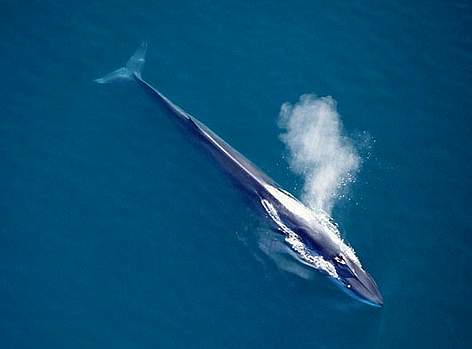 
The Managing Director of Sea Shepherd Australia, Jeff Hansen summed up the prolonged global looting spree of our oceans this way: "These whale poachers have no respect for the global moratorium and the wishes of the majority of people on this planet that want to see an end to whaling. Whales are worth far more to us alive than they ever did from whaling, especially now with the explosion of the global whale watching industry and the sheer importance whales play in the health of our oceans. Iceland, increasing its murdering quota of endangered Fin whales to be sold to Japan, where much of the whale meat will end up as dog food, is a complete lack of respect for these beautiful, intelligent and socially complex mammals, a complete lack of respect for the International Union for the Conservation of Nature and a complete lack of respect for our children that want to grow up in world with the great whales."

In the summer of 2012, Danish scientists inspected a North Atlantic endangered Fin washed-up along Denmark's coastline. They were stunned to discover this 74-ton regal rorqual whale was 140 years old, 24 years older than the previous oldest known Fin whale. 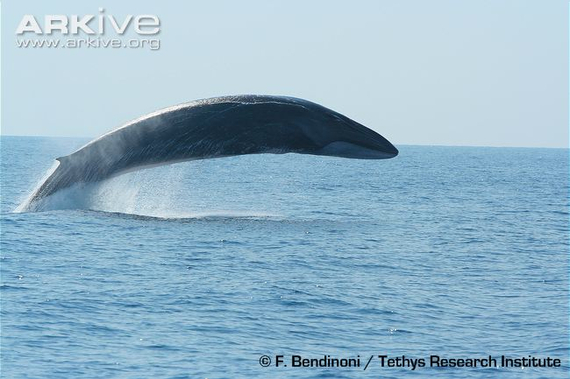 Fins along with Blues have the lowest frequency sounds of any animal on the planet. They can be heard clearly across entire ocean basins, spanning 5,000 miles. Photo credit: F. Bendinoni

Over the past 200 years humans have annihilated over five million whales.

Fins swim in the North Atlantic around Iceland. Only a loathsome human bully unremittingly slaughters animals just for the sake of it.

It's time to end the gruesome 'War Against Nature,' now. 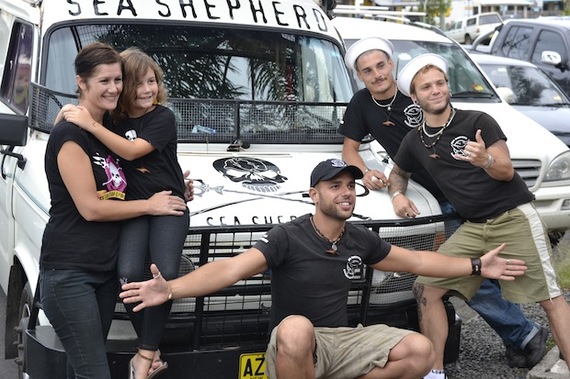 Sea Shepherd relies upon volunteers to help protect our oceans. Make a difference and be part of a global movement for healthy oceans. Photo credit. SeaShepherd.org.au

Earth Dr Reese Halter is a broadcaster and biologist, and author of the forthcoming 'Shepherding the Sea: The Race to Save Our Oceans.