I'd like to talk with you today about the show "Grace in the Light," at Dacia Gallery in Manhattan. It's a solo show of paintings by Victoria Selbach. I've been a fan of her paintings for a few years now, and in the interests of disclosure, I should tell you that I also show at Dacia Gallery. In fact, I recommended Selbach to the dealers there, and they liked her work and gave her a show.

I'm a painter first and an art writer second. This puts me in an awkward spot. I do have to write about painters apart from myself, but I also know a lot of the painters whose work I like. The way I've resolved this issue is that I simply won't write a negative review. That doesn't mean I'm lying in my positive reviews. It means I only write about work if a) I like it and b) I have something interesting to say about it. And I hope you'll put up with my being friends with some of the painters.

So let's talk about Selbach. Much of her work involves paintings of women in dark interior spaces, patchily lit by bright sunlight. The human eye can handle a maximum light-dark contrast ratio of something like 15,000 to 1. Paint at its best goes to maybe 100 to one. Selbach has spent years finessing tricks out of paint to suggest dazzlingly intense light emerging out of lush shadow. Consider Nude 4, from 2009: 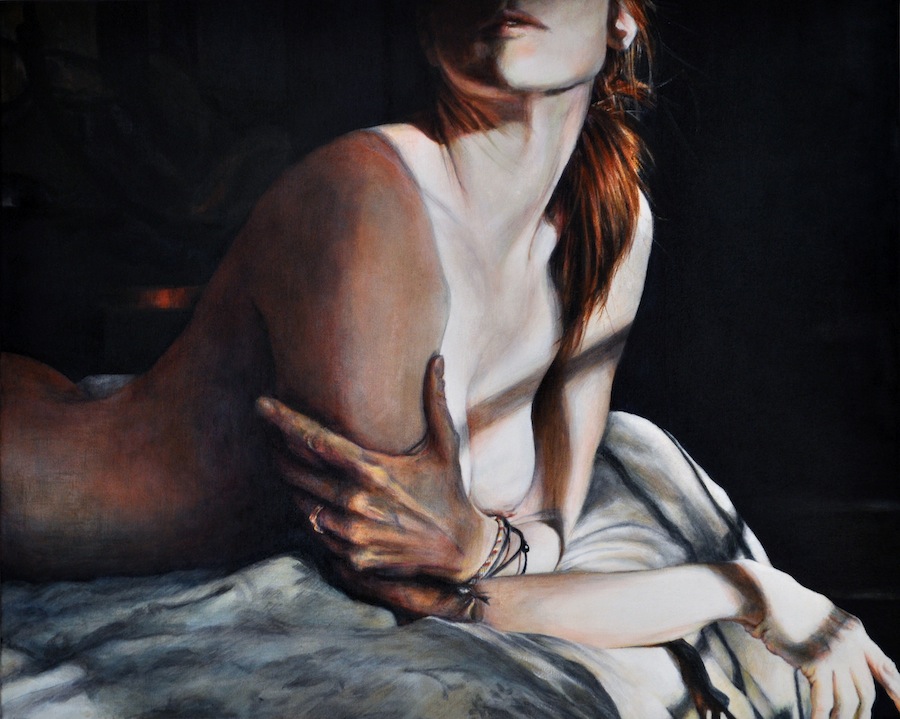 She has figured out composition, overexposure, and bounce-light glow in this image. But revisiting these techniques three years later, she coordinates them much more subtly and gracefully: 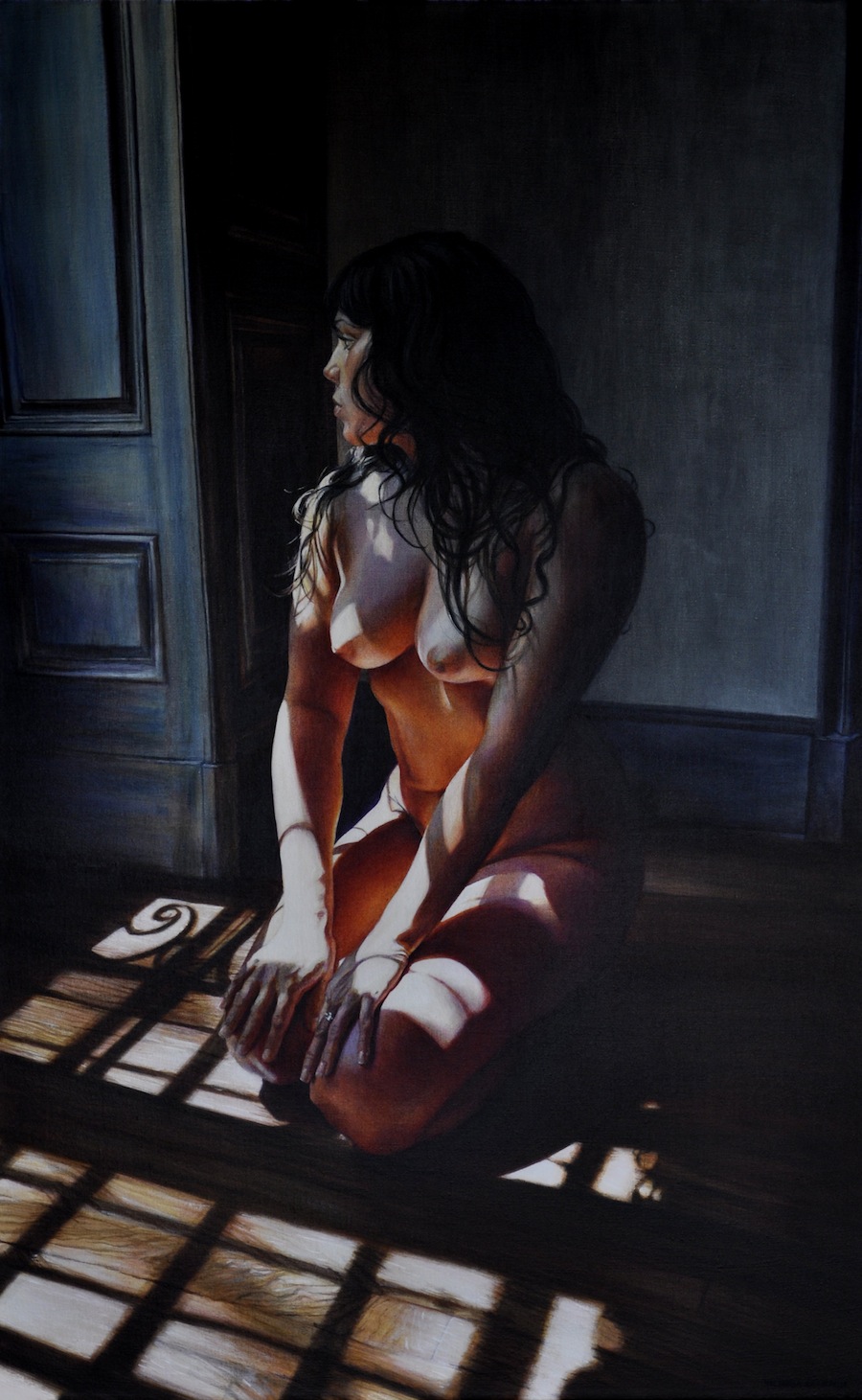 There are a lot of people painting a lot of female nudes right now, and many of them are doing a good job. Yet I have always had a feeling that there was something more essential, more necessary to Selbach's work than to most of the nudes I was seeing. What makes them special? I think I've finally put my finger on it. Consider Mary 3: 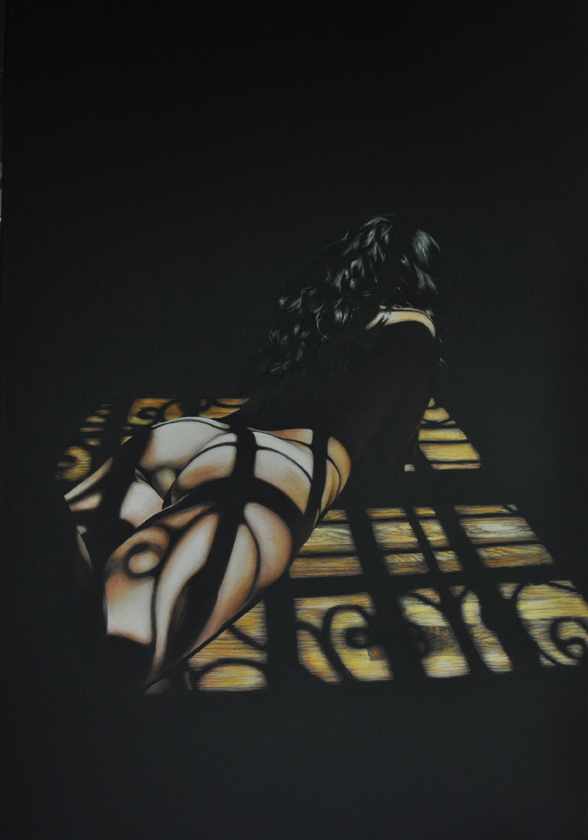 Typically for Selbach's work, a complex pattern of light and shade is draped over the figure. This pattern disrupts the ordinary figure-ground relation. Instead of one figure (the figure itself) and one ground (everything behind the figure), we have two paired figures-and-grounds. One pair is the literal figure and the floor she's lying on. The other is the light, and the shadow surrounding it. These two systems conflict.

That's interesting, but what does it buy us? On the most superficial level, it's cognitively appealing; the brain is forced to fill in the outline of the figure, just as it does in those images of a dalmatian against a field of random black-and-white blotches. We get a huge preconscious kick out of this edge-completion procedure.

On a deeper level, I think this disruption holds the key to the significance of the work. The sight we see has clarity and definition, and yet the figure is not entirely separable from the space in which it is immersed. This phenomenon - a combination of clarity and irresolvability - reminds me of Freud's elaboration on Romain Rolland's proposal of the concept of oceanic feeling. Freud writes:

It is a feeling which he [Rolland] would like to call a sensation of 'eternity,' a feeling as of something limitless, unbounded - as it were, 'oceanic.' ... it is the source of the religious energy... One may, he thinks, rightly call oneself religious on the ground of this oceanic feeling alone... it is a feeling of an indissoluble bond, of being one with the external world as a whole.

[Civilization and Its Discontents, pp. 1-2]

Yes, yes - this is what I think of when I look at Selbach's women, who are so thoroughly integrated into their spaces that they cannot be separated from them, or even seen distinctly, despite the light. There is no cognitive impairment here, but rather a shift in perspective, a collapse of distinction between self and world. Where does this oceanic feeling originate? Freud continues:

An infant at the breast does not as yet distinguish his ego from the external world... He must be very strongly impressed by the fact that some sources of excitation, which he will later recognize as his own bodily organs, can provide him with sensations at any moment, whereas other sources evade him from time to time - among them what he desires most of all, his mother's breast - and only reappear as a result of his screaming for help. In this way there is for the first time set over against the ego an 'object,' in the form of something which exists 'outside' and which is only forced to appear by a special action.

[Civilization and Its Discontents, pp. 3-4]

I would not like to overcommit to Freud as a thinker, but I do think he's onto something here. Let us return to Selbach's work, so much of which is named in relation to Mary mother of Jesus. Here is Mary 5:

Armed with the concept of the oceanic feeling, we can make more sense of our response to the work. This Mary emerges partly out of darkness, as do the Magdalenes of de La Tour. The immeasurably bright sunlight, reflecting off the floor, warmly illuminates the undersides of her belly and her breasts. Confronting this female nude - yet another female nude, sigh - we are suddenly overcome with a feeling of the essential, of the unfetishized feminine. Why? Because the entire basis for the oceanic feeling lies in the primal encounter of the infant and its mother's body, and its inability to distinguish itself from it. Selbach's Mary figures juxtapose the religious impulse, and the infantile bond to the mother, evoking both in the glowing bodies of her models, dappled by sunlight and lost in shadows just inside the doorway of her studio. They must evoke both, because their true subject is the profound force which underlies both, the oceanic feeling. And if Selbach's true subject is the oceanic feeling, then we have an explanation for why her female nudes read not as a neo-academic reflex, but as a thematic necessity: because without the original encounter of the inchoate consciousness with the body of a woman, dimly understood as a kind of cosmic mother, there is no fully-formed oceanic feeling.

This is what sets Selbach's work apart. She selects a seemingly simple toolkit: light, shadow, wooden floors, trellised windows, a female model. But she recognizes that her tools are not ends in themselves. They serve a basic need, a fundamental impulse, to go back - if you are a Freudian - or forward - if you are a Catholic - to that Mary who is all-surrounding, all-present, loved without bound because she herself is without bound. Selbach's impulse is an ache for the ocean, and her work is the ocean itself.