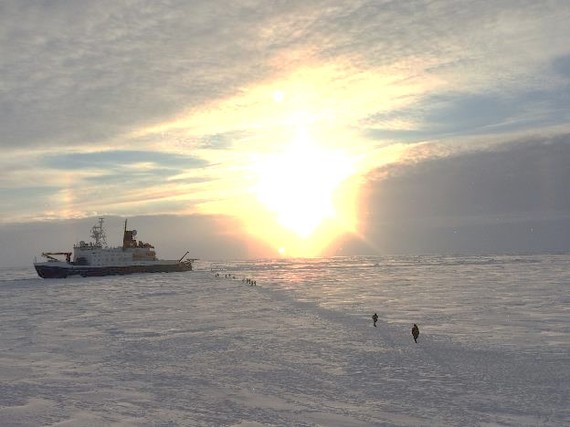 Members of the U.S. science party walk across the ice and back to the Healy after a visit to the German icebreaker Polarstern.

Ninety five percent of Earth's water lies in the ocean, and on a planet dominated by saltwater, mapping the chemistry of the global ocean requires a global effort. The GEOTRACES program was established in 2006 to organize this effort, drawing support and participation from 30 different nations. This summer research teams from the United States, Canada, and Germany are working together to survey the chemistry of the Arctic Ocean. Planning for the Arctic began five years ago and each nation's cruise transect was designed to maximize spatial coverage of the basin while occupying international cross-over stations to assess the accuracy of our measurements.

On September 7, 2015 the USCGC Healy and German R/V Polarstern crossed paths near the North Pole, an unexpected intersection in the high Arctic. On an icebreaker it is difficult to estimate the arrival time of our planned stations (speed is dictated by ice thickness), so it was by chance that the two ships arrived near 90 °N in sync.

The afternoon was spent welcoming the German science party onto the Healy, giving tours of living quarters and lab spaces. A short walk across the ice brought us to the R/V Polarstern where we were greeted with smiles and warm cider, interacting with a new set of humans for the first time in 30 days. The Polarstern has a wooden deck, a bar with a shiny disco ball suspended from the ceiling, and a swimming pool and sauna - all stark contrasts to the metal clad military vessel the U.S. science party has grown accustomed to. I had the opportunity to visit and share data with Lars-Eric Heimburger from Bremen University, a colleague who is measuring mercury onboard the Polarstern. The encounter was a morale booster for science and crew members from both ships - what better place for an international meet-up than the North Pole? 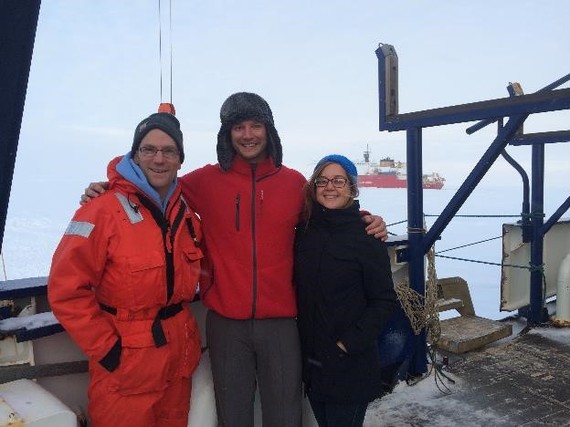