With the year-to-date running as the eight-warmest on record, October 2012 tied with 2005 for the globe’s fifth-warmest such month since recordkeeping began in 1880, according to the National Oceanic and Atmospheric Administration (NOAA). This was the 36th straight October with global average surface temperatures above the 20th-century average. The last below-average month of any month occurred in February of 1985, the year the Space Shuttle Discovery completed its first mission.

For the year-to-date, the combined global land and ocean average surface temperature was 1.04°F above the 20th-century average, which ranks the year as the eighth-warmest on record so far, NOAA said in a report released on Thursday. 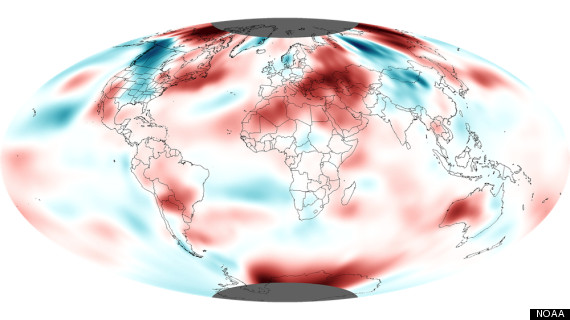 Much of Europe, western and far eastern Asia, northeastern and southwestern North America, and most of Australia, among other areas, saw above-average temperatures during October. Much of northwestern and central North America, central Asia, parts of western and northern Europe, and southern Africa were “notably below average,” NOAA said.

For the lower 48 states, however, October was slightly cooler than average, ending a 16-month long streak of warmer-than-average months.

As Climate Central reported on Nov. 9, the U.S. is very likely to set a record for the warmest year on record, unless the rest of November and all of December are among the coldest ever seen for such a period, which is unlikely. According to Jake Crouch of NOAA’s National Climatic Data Center in Asheville, N.C., there is a greater than 90 percent chance of a record warm year in the U.S., based only on historical data. Those odds increase when taking monthly forecasts into account.

The U.S. warmth this year has been propelled by a widespread March heat wave, the warmest spring on record, and the third-hottest summer on record. The month of July, for example, set the record for the hottest month of any month since weather records began in 1895. The record warmth this year is consistent with both the influence of manmade global warming — particularly the prevalence of record warm nighttime temperatures — and natural climate variability, which has also favored warmer-than-average conditions in the U.S. this year.

In parts of the equatorial tropical Pacific, water temperatures were above average and close to the threshold for an El Niño event, which is characterized by warmer-than-average water temperatures and changes in weather patterns. However, a full-blown El Niño has not materialized, and NOAA’s Climate Prediction Center is predicting it will not occur during the upcoming winter.

“The atmospheric circulation that we would like to see” with an El Niño, such as more tropical rainfall, “has not really occurred,” said Jon Gottschalck of NOAA’s Climate Prediction Center in College Park, Md. Gottschalck said that because El Niño sputtered out, there is more uncertainty involved in making a U.S. winter outlook. “It’s definitely extremely difficult . . . this winter forecast is one of the most challenging we’ve faced in the last few years,” he said. 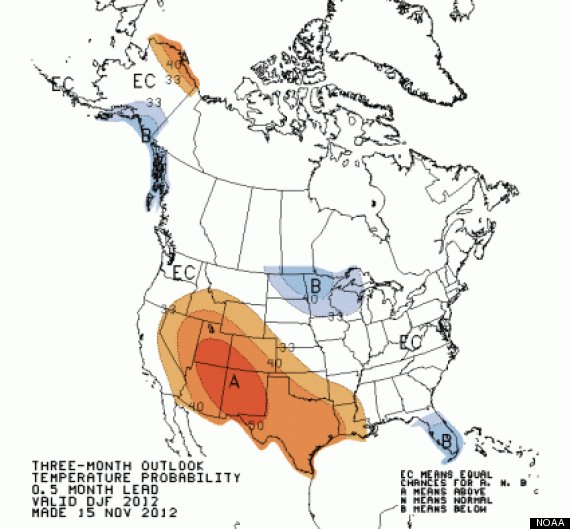 The drought, which still covers about 60 percent of the contiguous U.S., is forecast to persist into at least early spring, particularly in the High Plains and the West, according to the latest U.S. Drought Outlook, which was also released on Thursday.

Northern Hemisphere snow cover extent for October was the eighth-largest monthly extent in the 45-year period of recordkeeping, at 734,000 square miles above average. Snow cover extent in North America was the seventh largest on record for October. Canada and Russia, including Siberia, saw much above-average October snow cover. After setting a record low in September, sea ice extent doubled during October but still only managed to recover to the second-lowest extent on record for October, ranking just above 2007.

In recent years research has shown there may be links between October snowfall trends in Siberia and subsequent winter weather in the eastern U.S., with indications that a rapidly advancing Siberian snow cover can favor colder, snowier winters in the East. With October Siberian snow cover coming in above average, this could indicate an above-average chance of a colder, and possibly snowier, winter, although that has not been reflected in the official NOAA winter weather outlook.

There has also been research showing that Arctic sea ice can lead to more extreme weather in portions of the Northern Hemisphere by altering the flow of the upper atmosphere jet stream winds, but the Climate Prediction Center does not yet take that into account when making seasonal forecasting predictions.

“That is very much a research issue, similar to the snow cover, [and] we do discuss these things, but we have to be somewhat careful about what we use in these outlooks,” Gottschalck said.