The US job market continues to truck along at a solid clip, with payrolls adding over 200,000 jobs for the ninth straight month -- including 214,000 last month -- the unemployment rate ticking down to 5.8%, the closely watched participation rate ticking up a tenth, positive payroll revisions of 31,000 for August and September, and a slight bump up in average weekly hours worked.

Yet wage growth is still stuck at 2% on a yearly basis, just slightly ahead of inflation. In other words, while the job market is unquestionably tightening, it's still not tight enough to boost the bargaining clout of most workers. More job seekers are finding work, more incumbent workers are getting the extra hours they seek -- involuntary part-time work is down by about one million workers over the past year. Even the long-stagnant employment rate (the share of the population with a job) is showing a bit of muscle, up 20 basis points last month and one percentage point compared to year ago.

But wage growth has been stuck at about 2% since late 2009, standing out as the most important piece of unfinished business in the labor market.

Turning briefing to the payroll numbers, my patented jobs day smoother, which averages monthly gains over different intervals, tells the story of how employers are adding jobs at a fairly steady pace now between 220K and 230K per month (see figure below). Not breakneck job growth, but steady and fast enough to lead to a steady tick down in the jobless rate.

In fact, at 5.8%, unemployment is the lowest it's been since the summer of 2008 and the more comprehensive measure of underemployment, at 11.5%, has fallen steeply off of its peak rate of 17.1% back in late 2009, amidst the worst of the downturn.

Today's report also offers another data point in another important trend: the stabilization of the labor force participation rate, which has wiggled within a narrow range between 62.7% and 63.2% since last August. This suggests that working-age people are increasingly less likely to drop out of the job market due to their perceived lack of adequate opportunities.

While the growth in average hourly earnings is flat, that of weekly earnings is up 2.6% due to the aforementioned bump in weekly hours, which at 34.6 hours per week hit a post-recession high. That's a plus for real weekly paychecks, given the inflation was last seen rising at about 1.7% on a yearly basis, implying real weekly earnings are up almost a percent. Moreover, with gas prices falling, weekly paychecks are likely to climb even a bit further in real terms in coming months.

However, let's be clear about this: if the only way to get ahead is more weekly hours at stagnant hourly wages, then eventually stresses to balancing work and family will begin to show. What we see here is something that's been evident in the US job market since the latter 1970s: productivity -- or output per hour of work -- is rising but it's not showing up in most workers' hourly wages.

This combination of stagnant hourly wage growth and low inflation (even without energy prices, as in the Fed's inflation gauge) implies a strong need for patience regarding the unwinding of monetary stimulus at the Fed. The job market is slowly but steadily moving towards full employment, but there's still considerable slack. If we want to see real wages going up across the wage scale -- not just at the top, but at the bottom as well -- we're going to need to not only get to full employment, but to stay there. 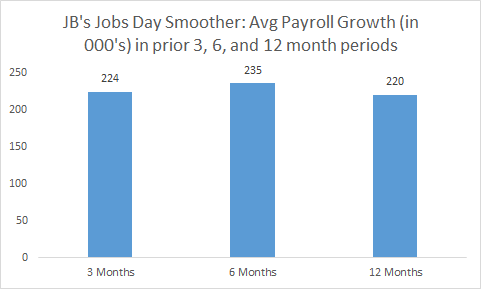