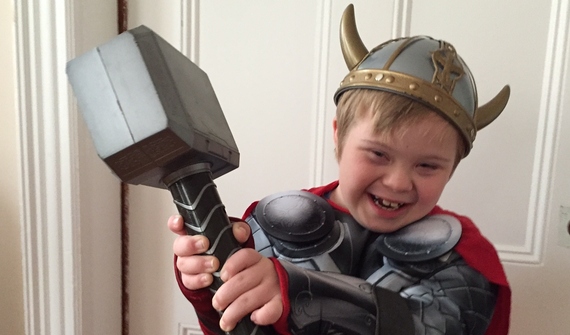 In 1984, Reagan inaugurated October as National Down Syndrome Awareness Month. His proclamation would encapsulate a failing in Down syndrome advocacy for the next 30 years:

"In the past decade, the United States has entered a new era of hope for its developmentally disabled citizens", Reagan intoned, "This new age of enlightened understanding recognizes that developmentally disabled persons have a great potential for achieving and overcoming handicaps. And, then, this: "Research has uncovered the genetic basis for the condition and points the way to its ultimate prevention."

It was a mixed message. We accept you and we would hope to prevent you. It was, after all, a proclamation not human rights legislation.

Rather than challenging that dichotomy he espoused we agree with it, celebrating this part of his proclamation over the last three decades instead: "Public awareness and acceptance of the capabilities of persons who have Down's (sic) syndrome can greatly facilitate their being welcomed in all communities".

October's Down Syndrome Awareness Month has become just that, an awareness campaign promoted by national and local Down syndrome organizations with Buddy Walks and the faces of children with Down syndrome displayed above Times Square. These are not bad ideas. For people with Down syndrome and their families, October is a celebration of Down syndrome.

But reality has not ignored that dichotomy and it has had meaningful and existential consequences for people with Down syndrome:

Down syndrome did not get better, our humanity with regards to them did. Like all people, when treated better, fair better.

During the same time as we have allowed the advancement of people with Down syndrome we have also created less invasive and cost effective means to identifying them prenatally through genetic testing fulfilling Reagan's hope toward ultimate prevention.

Down syndrome is a victim of a diluted and compromised narrative. The messengers with the most money and most concision are the medical and scientific communities supported in part by profitable genetic testing companies, all touting the same compelling message: people with Down syndrome are defective. Here humanity does not accept individuals with Down syndrome instead it sees them as a problem to solve.

The problem with this narrative from purely a human rights perspective is Down syndrome as acceptable shows up halfway through someone else's story. It was a message likely more potent closer to de-institutionalization when most children with Down syndrome were beginning to be raised in their family's homes rather than institutions.

There is the thorny issue of reproductive rights. The debate over the prevention of people who have Down syndrome is pitted against a woman's right to choose. This battle hurts both parties and is unwinnable.

If Down syndrome is to survive it needs a message that accepts it as not a problem to solve, an experience to overcome or an opposing faction, but solely as a human rights issue to address.

The message must promote people with Down syndrome. That message must be singular in nature. It must be acceptance first, last and always.

To vanquish the dichotomy put forth in 1984 of acceptance and prevention we must welcome people with Down syndrome unequivocal as human beings who deserve the same consideration we all desire.

As a society we have never said that before.

Kari Wagner-Peck is a advocate and activist for Down syndrome who authors the blog a typical son. She is a regular contributor at Huffington Post. You can find her on Twitter @atypicalson.