As you've probably heard, Facebook bought Oculus VR for $2 billion. While that's an exciting sum, it probably means very little to you if you have no idea what the Oculus Rift is.

Buckle up. This is going to blow your mind.

The Oculus Rift is a virtual reality headset -- yeah, virtual reality as in "Total Recall" virtual reality -- designed specifically for gaming. It got its start in 2012 on the crowd funding site Kickstarter, where anyone can contribute to projects that interest them. It demolished its $250,000 fundraising goal, raising over $2 million. It remains one of Kickstarter's most successful campaigns. 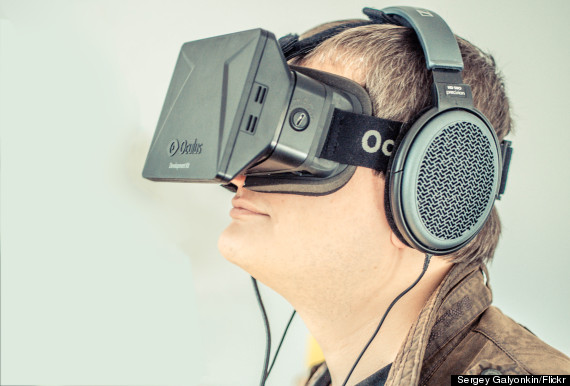 Don't let its semi-dorky appearance fool you. That's an incredible piece of technology.

Virtual reality isn't new. There have been attempts to create virtual worlds since the '60s, and the idea really took off in the '90s, spawning games that were clunky and heavy, like Nintendo's 1995 disaster Virtual Boy. But it wasn't until the Oculus Rift that virtual reality became something attainable and, perhaps more importantly, desirable for consumers.

The headset fits over the eyes, completely covering the wearer's field of vision. Unlike the virtual reality headsets of the past, it's light, with a screen that's easy to look at (even for extended gaming sessions), since it's set up to appear exactly as if the virtual world was being seen in real life. And, happily, the Oculus Rift website insists it's designed to be affordable for the average consumer.

That doesn't mean you can get one yet. The Rift is only available to developers, but that hasn't stopped it from making headlines. The Oculus Rift has been nominated for Best of E3 Game Critics Awards two years in a row, winning in 2013 for "Best in Hardware/Periphery." Critics consistently cite it as one of the most exciting developments in the gaming industry, saying it has put virtual reality back on the map. It even has a competitor: Sony announced its own virtual reality headset for the Playstation 4 last week.

For developers, the Oculus Rift platform is a playground, allowing them to put themselves into any virtual world they can imagine, whether it's a favorite game like Skyrim (Warning: NSFW language up ahead) ...

... or simply a situation you'll likely never experience in real life. In this video, YouTube user PewDiePie swims underwater, makes a new "friend," dances with some anime girls on a beach, gets into a car wreck, and is guillotined. Yes, guillotined. Another NSFW warning for this video (gamers are a vulgar bunch).

Despite the Oculus Rift's popularity in the gaming world, non-gamers are using the hardware with amazing effects. A recent experiment from an open source art project from BeAnother Lab had men and women don the headset to create the illusion of being another gender. You can see the project in the video below. There is some nudity in the video, so it's also NSFW.

Gender Swap - Experiment with The Machine to Be Another from BeAnotherLab on Vimeo.

So what does Facebook want with virtual reality? CEO Mark Zuckerberg's statement lists everything from courtside basketball games to doctor consultations to new forms of communication.

One thing is certain: If the Facebook founder gets his way, you probably won't need an explanation of what the Oculus Rift is for very much longer. You'll probably be wearing one.