On this same day that Doc Brown and Marty McFly are supposed to slip through time in a DeLorean and end up here among us, I am wearing an Oculus Rift headset. You might not believe me, but I'm going back to the future.

I'm at my university's faculty innovation center, taking a tour of space via the Apollo 11 VR Experience. If I look down, my virtual body is an astronaut. I reach for a floating pencil that drifts by, but of course it's an illusion. The most profound experience happens when I start to feel cramped in this tight space, so I crane my head to look out a window.

As I push my face right up to the glass porthole of the Apollo capsule, suddenly the limiting confines of the cockpit give way to the endless distance of our galaxy and beyond. Just that extreme change of perspective, without fully anticipating it, is exhilarating.

It can leave you asking the question -- is this surreal or hyperreal? Do we go deeper into a fantasy world, or does this make our goggle-bound vision seem entirely too real? You might be surprised to know that this dichotomy has long been in play, even from the earliest critical reactions to motion pictures.

A published article exists from 1896, just after the arrival of the first movie show in London: a compilation of short films by the Lumières, the French inventors of cinema. And this article, which some might regard as the very first movie review in English, actually links the Lumière films to another invention of its time: x-rays!

This may seem an unlikely comparison now, but its author wrote that these were "twin echoes." In a sense, it was easier to notice back then how x-rays and cinema were offshoots of the same photographic technology. This shows how, with each new advance in imaging, we make our own rifts -- a sensation of the observed media being real and/or unreal.

Look at what the reviewer, using the byline O. Winter, had to say in 1896: "The dominant lesson of M. Lumière's invention is this: the one real thing in life, art, or literature, is unreality." Winter's opinion was that the first movies were an artless capture of pictures, while the new discovery of x-rays could at least "pierce the husk of flesh and blood" to reveal a glimpse into a netherworld of living skeletons.

This was famously accomplished by Dr. Wilhelm Röntgen, a physics professor. When his wife became the first person to be x-rayed, she is reported to have looked at the bones of her hand and said, "I have seen my death." This was her reaction to something that looked so morbid, yet which revolutionized medical prognosis and would then save and improve many lives.

To see a vision like this can certainly elicit those types of reactions. As I wore the Oculus Rift, I had my own tech-enabled vision. To be sure, there was some motion blurring and pixelation. Nonetheless, it was a mostly convincing illusion. It was surely not my death, but perhaps some kind of afterlife.

Mrs. Röntgen's quote ("I have seen my death") suggests seeing into the future, and that is quite a sensation, something that VR in 2015 can share with x-rays in 1896. As much as Virtual Reality is a parallel world, it can also feel like a jump forward in time. When we are done with the trip, we go back to reality.

Admittedly, that remains one of the coolest parts of crossing over the Oculus Rift. It can be invigorating to come home. Sunlight, we notice, is sublime. The Apollo VR sunlight is so 'meh' that my reentry is freshly welcoming. I'm back from space. And for now, at least, there is a clear separation of what exists here and what resides there.

Innovations in augmented reality may eventually change that, but to find a precursor we can again look to 1896. In Paris that year, there were public shows running daily of the Lumière brothers' movies. One of the anecdotes of early cinema involves a screening of their 50-second film, "The Arrival of a Train at La Ciotat Station."

Legend has it that French moviegoers panicked and ran to the back of the theater to get out of the way of the train. If this story is true, then it shows that the brothers had convincingly projected the impression of a 'real' locomotive with little more than black and white filmstrip. And that is some serious Steampunk VR. 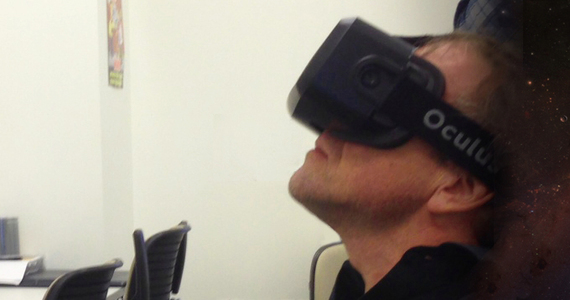